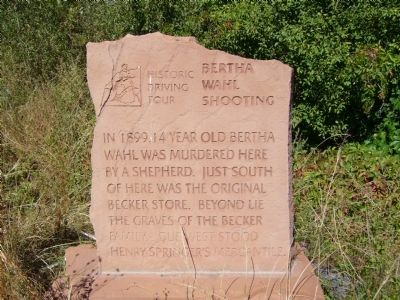 Photographed By Bill Kirchner, September 24, 2010
1. Bertha Wahl Shooting Marker
Inscription.
Bertha Wahl Shooting. . In 1899, 14 year old Bertha Wahl was murdered here by a shepherd. Just south of here was the original Becker Store. Beyond lie the graves of the Becker family. Due west stood Henry Springer's Mercantile. . This historical marker was erected in 2002 by Round Valley Positive Action Tourism Committee and Springerville-Eagar Chamber of Commerce.. It is in Springerville in Apache County Arizona

In 1899, 14 year old Bertha Wahl was murdered here by a shepherd. Just south of here was the original Becker Store. Beyond lie the graves of the Becker family. Due west stood Henry Springer's Mercantile.

Topics and series. This historical marker is listed in these topic lists: Notable Events • Women. In addition, it is included in the Arizona, Pistols, Plows and Petticoats Historic Driving Tour series list. A significant historical year for this entry is 1899. 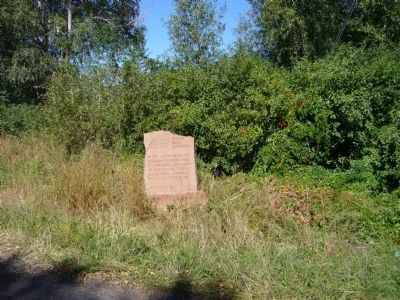 More about this marker. This is Marker Stop #17 on the Pistols, Plows and Petticoats Historic Driving Tour.

Regarding Bertha Wahl Shooting. John C. Wahl was a major cattleman in Round Valley and his wife, Caroline was a major sheep owner. She jokingly told Eujenio Matas, a young sheepherder, that if he worked for them for seven years he could marry their young daughter Bertha. Everyone knew that Caroline was joking, but now Matas was upset that at age fourteen, Bertha was preparing to leave and attend boarding school in Albuquerque for her high school education. He was angry and wanted to get even so he shot and killed her in her bedroom with her mother and sister witnessing the event.

Matas was taken to jail, tried and found guilty of murder. He was to be hanged on December 1, 1899, but for some reason the then Governor of Arizona Territory, Nathan Oakes Murphy, commuted his sentence to life in prison. Matas spent fourteen years in the Yuma Territorial Prison when acute tuberculosis won him a medical discharge. He returned to his former home in New Mexico, married and had two children before succumbing to TB after five years of freedom.
Source: The Pistols, Plows and Petticoats Historic Driving Tour Brochure.
Credits. This page was last revised on April 19, 2018. It was originally submitted on October 6, 2010, by Bill Kirchner of Tucson, Arizona. This page has been viewed 1,254 times since then and 36 times this year. Photos:   1, 2. submitted on October 6, 2010, by Bill Kirchner of Tucson, Arizona. • Syd Whittle was the editor who published this page.
Share this page.