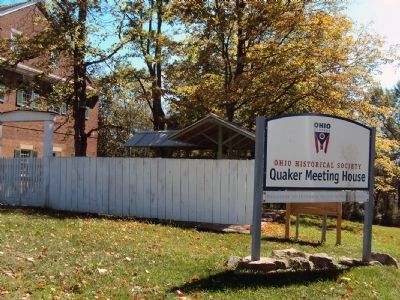 What is a Quaker?

“I went to many a priest to look for comfort, but found no comfort from them.” — George Fox recounting his spiritual journey in The Journal of George Fox.

George Fox’s frustration led to the establishment of a new Christian sect. A young wool trader in 17th century England, Fox had become dissatisfied by authoritarian religions. By 1648, he organized the Religious Society of Friends. Members of this new religious group became known as Quakers.

Quakers believe, then as now, that God exists as an “Inner Light” within all people. Individuals meet together to worship in silence, seeking a direct experience with God. Clergy and elaborate services are not necessary.

In the 17th century, these unconventional practices were considered heresy by the English ruling class. Quaker meetings were outlawed and many of Fox’s followers were imprisoned. Like the Pilgrims, large numbers of Quakers sought to escape persecution by finding refuge in America.

The testimony of equality 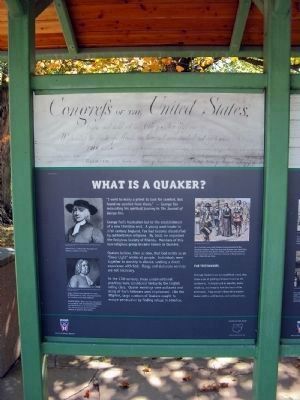 Click or scan to see
this page online
That all rights are human rights and pertain to human beings … therefore justice demands that all laws shall be made, not for man, or for woman, but for mankind.” — From the 1850 Proceedings of the Ohio Women’s Convention held in Salem, Ohio.

The Quaker testimony of equality recognizes each individual as having equal spiritual worth. This belief led most Quakers to reject slavery. It also influenced the Quaker's treatment of women.

Unlike many church services of the time, women played an active role in Quaker meetings. Women were free to speak and even convened their own discussions during certain portions of the meetings. Recognizing the Quakers’ progressive views, the Ohio Women’s Convention held its second meeting in the Quaker village of Salem.

Construction of the meetinghouse began in 1814. Jacob Ong served as both architect and builder, basing the Mount Pleasant structure on other Quaker meetinghouses in the United States.

This plain structure was massive, holding 2000 people. It is a model of robust construction, featuring 24" brick walls that thicken to 28" at the base. Each column was carved from a single log. The materials used were all collected and fabricated from the surrounding countryside.

The interior was designed to support 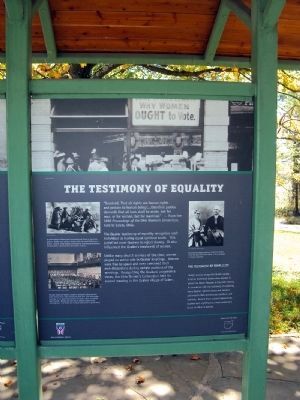 By Jamie Abel, October 3, 2010
3. The Tesimony of Equality - Panel 2
the business of the yearly meeting. Men and women entered through separate doors and sat in two equally sized galleries. A long balcony was built for children in attendance. At the front of the meetinghouse, elders faced members of the meeting on an elevated three-tiered gallery.

Quakers at yearly meetings dealt with serious issues. In 1828, Elias Hicks challenged the beliefs of many Quakers throughout the United States by rejecting the idea that the Bible was the sole authority of Christians. In Mount Pleasant, the meeting broke into a riot pitting Hicks’ supporters against their fellow Quakers. This schism split the Quakers into two groups, each holding separate meetings here in Mount Pleasant.

Another schism took place among Orthodox Quakers a quarter century later. As revivals swept the nation, Joseph Gurney began teaching an evangelical interpretation of Quaker beliefs. John Wilbur countered this movement with an adherence to traditional teachings. Conservative and evangelical Quakers were deeply divided. In 1854, the Orthodox Quakers in Ohio split between the Gurneyites and the Wilburites.

Three major groups resulted from these tumultuous events: the Hicksites, Gurneyites, and Wilburites. The roots of today’s modern Quaker religion were formed by these three sects. 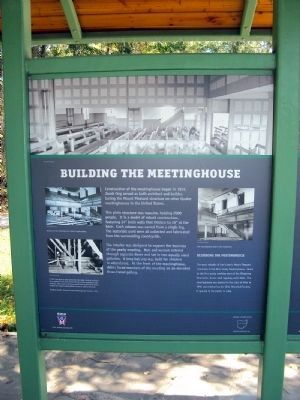 “That this abomination ... must be abolished is as clear as the shining of the sun at noon-day.” — Benjamin Lundy, from the front page of the first issue of the Genius of Universal Emancipation, 1821.

Benjamin Lundy witnessed the cruelty of slavery while working as a saddlemaker’s apprentice in Wheeling, West Virginia. Vowing “to break at least one link of that ponderous chain of oppression,” Lundy became one of the most respected abolitionists of his time.

Lundy found success in organizing an anti-slavery group that quickly grew to 500 members, but his real weapon against slavery was the press. He initially collaborated with Charles Osborne in publishing The Philanthropist. He went on to write the manuscript for the Genius of Universal Emancipation from his home in Mount Pleasant.

The success of his publication brought Lundy much attention. Believing his work would have greater influence in the urban East, Lundy eventually moved his operation to Baltimore.

Although it may appear as a quiet village, Mount Pleasant was at the forefront of the heated abolitionist movement. Ohio was part of the first free territory established in the United States. Blacks were paid to work 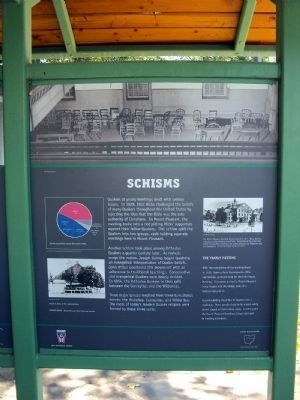 By Jamie Abel, October 3, 2010
5. Schisms - Panel 4
throughout the area and possibly built many of the brick structures in Mount Pleasant.

Charles Osborn, a Quaker minister who organized a Tennessee abolitionist society, spoke here at the 1815 Yearly Meeting. He went on to move his family to Mount Pleasant where he published the United States’ first anti-slavery gazette, The Philanthropist.

Quakers attempted to protest slavery through the use of the free market. Recognizing the hypocrisy between anti-slave sentiment and purchasing slave-made goods, the Ohio Yearly Meeting formed the Free Labor Store in 1848. Selling only items produced without slave labor, the store had limited success. Scarcity of free labor products eventually forced the store to close.

Many Quakers stood in fierce opposition to slavery. When Congress passed an ordinance prohibiting slavery northwest of the Ohio River in 1787, Quakers throughout the country began a migration to this wilderness territory. Those who brought slaves freed them on arriving.

Jesse Thomas was a Quaker from North Carolina. He migrated to this area with his family in 1802, a year before Ohio became a free state. That same year Thomas and Robert Carothers laid out “Jesse-Bob Town.” It was renamed Mount Pleasant. 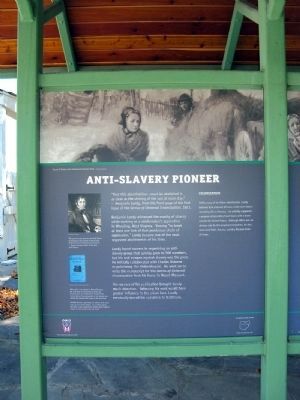 By Jamie Abel, October 3, 2010
6. Anti-Slavery Pioneer - Panel 5
Its first log structures were soon joined by well-crafted brick buildings. By 1821, Mount Pleasant hummed with activity. The village had its own bank, school, and market house, as well as several stores. Flour mills, sawmills, and a cloth factory surrounded the area.

Following its success in the early 1800s, Mount Pleasant was slowly bypassed as railroads, canals, and the National Road steered traffic away from the village. As a result, many buildings from Mount Pleasant’s early history remain unchanged today.

The oldest surviving structure is the log-built Harris-Bone Store. Harris was one of the first anti-slavery Quakers to arrive from North Carolina.

Across the street stands the Benjamin Lundy House. In addition to hosting many visiting Quakers during yearly meeting sessions, this was one of three locations of the Free Labor Store, a market that refused to sell slave-made goods.

Many homes can be found in Mount Pleasant, including the Hogg Mansion, which served as a stop on the Underground Railroad. 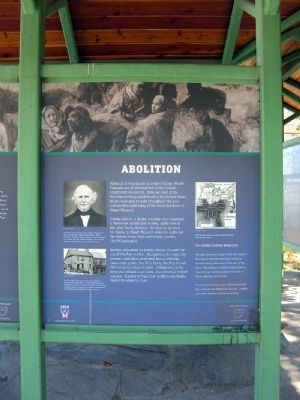 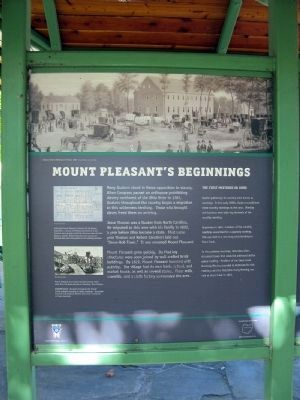 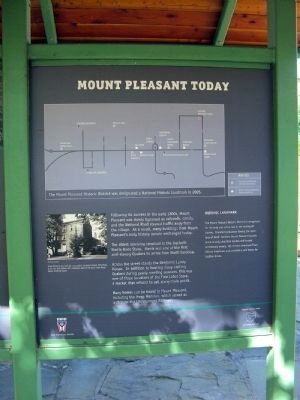 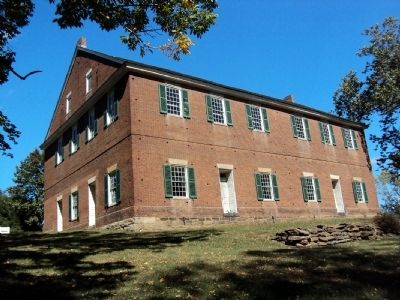