The Mississippi River in the Civil War 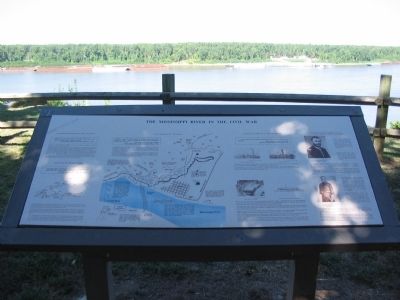 The Mississippi River in the Civil War
"Whatever nation gets control of the Ohio, Mississippi and Missouri Rivers, will control the continent."
Union General William Tecumseh Sherman, 1861

The goal of both the Northern (Federal or Union) and Southern (Confederate) armies was to secure and hold the Mississippi River.

Northern control of the river would break the Confederacy in half. Confederate troops west of the Mississippi would be unable to gain reinforcements or supplies. The Mississippi River was also the avenue the Northern armies would take to capture the lower South.

From 1861 to 1863, the Confederates controlled the Mississippi River. Their northernmost fortress at Columbus closed the upper river to Union gunboats. Vicksburg, the largest and most formidable river fortress, stopped any Union force invading from the south. Both forts held the title "Gibraltar of the West" - meaning impregnable, natural strongholds.

The Federal troops attacked the Confederates on the Mississippi from two directions. Troops, supported by gunboats, moved down the river from Cairo, Illinois. The ocean-going navy, 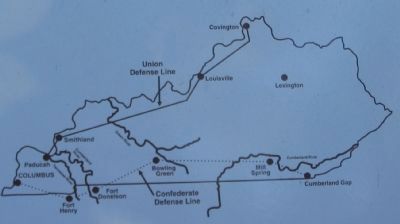 Click or scan to see
this page online
supported by the army, moved up the river from the Gulf of Mexico.

Kentucky in the Civil War
"Kentucky ought to hold herself independent of both sides and compel both sides to respect inviolability of her soil."
Kentucky Governor Beria Magoffin, 1861

In 1861, Kentucky announced its neutrality in the war. The state joined neither side because of the strong Northern and Southern sentiment in the state. Kentuckians enlisted in both armies during the war, but the state did not leave the Union.

Northern and Southern commanders wanted to occupy western Kentucky to secure the upper Mississippi, but hesitated because of Kentucky's neutrality. After months of hesitation, Confederate Major General Leonidas Polk invaded Hickman and Columbus on 4 September 1861.

To counteract Polk's movement into Kentucky, Union Brigadier General Ulysses S. Grant occupied Paducah and Smithland on September 6. Other Federal forces took Louisville and Covington. The Confederates advanced from Nashville and Knoxville to Bowling Green and the Cumberland Gap. Kentucky's neutrality was over before the war even began.

The Fortress of Columbus
"Columbus cannot be taken without an immense siege train and a terrible loss of life... they are strong; but it can be turned, paralyzed and forced to surrender."
Major General Henry W. Halleck,
Union 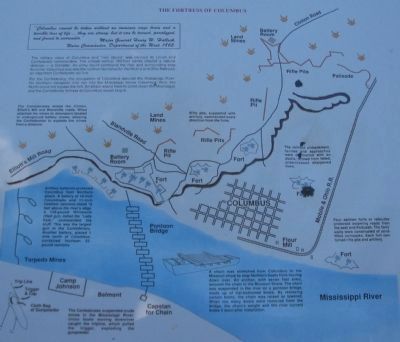 Photographed By Craig Swain, September 4, 2010
3. The Defenses of Columbus
Commander, Department of the West, 1862.

The military value of Columbus and "Iron Banks" was obvious to Union and Confederate commanders. The almost vertical 150-foot banks created a natural defense - a Gibraltar. An army could command the river and surrounding area for miles. Columbus was also the northern terminus for the Mobile and Ohio Railroad, an important Confederate rail line.

The Confederates mined the Clinton, Elliott's Mill and Blandville roads. Wires attached the mines to detonators located in underground battery rooms, allowing the Confederates to explode the mines from a distance.

Artillery batteries protected Columbus from Northern attack. A battery of 10-inch Columbiads and 11-inch howitzer cannons stood 15 feet above the river's edge. A 128-pound Whitworth rifled gun, called the "Lady Polk," commanded the bluff. This was the largest gun in the Confederacy. Another battery, placed 1 mile north of Columbus, contained fourteen 32-pound cannons. 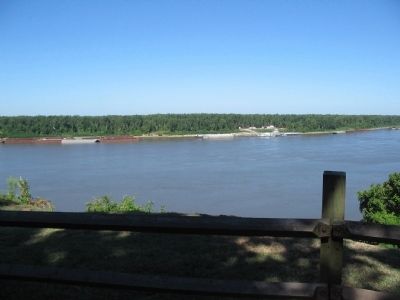 Photographed By Craig Swain, September 4, 2010
4. Belmont Landing from the Columbus Bluffs
the tripline, which pulled the trigger, exploding the gunpowder.

A chain was suspended from Columbus to the Missouri shore to stop Northern boats from moving down river. An anchor, with seven foot arms, secured the chain to the Missouri Shore. The chain was suspended in the river on a pontoon bridge, made up of flat-bottomed boats. By removing certain boats, the chain was raised or lowered. When too many boats were removed from the bridge, the chain's weight and the river current broke it soon after installation.

Rifle pits, supported with artillery, commanded every direction from the forts.

The railroad embankment, ravines and approaches were obstructed with an abatis, formed from felled criss-crossed sharpened trees.

Four earthen forts or redoubts protected incoming roads from the east and Paducah. The forts' walls were constructed of sand filled cornsacks. Each fort contained rifle pits and artillery.

Federal Gunboats on the Mississippi
"...I may say that the gunboats rendered the most effective service on this occasion..."
Union Captain Andrew H. Foote,
Commander USS Gunboat Lexington, 1861

The Northern and Southern navies played a significant role in the Civil War. Without the navy, the Union army would not have secured the Mississippi River and split the Confederacy in half.

At the beginning of the war, 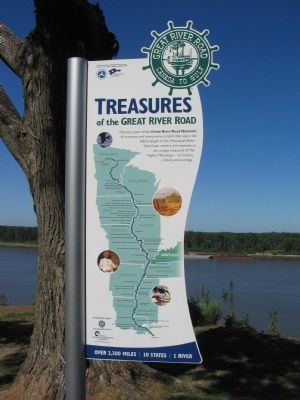 Photographed By Craig Swain, September 4, 2010
5. Great River Road
The park is a stop on the Great River Road tour.
the navy protected the people and property in Union and neutral states. By July 1861, the North began to use the navy for offensive actions. Wooden gunboats, called timberclads, were developed in Cincinnati for service on the Ohio and Mississippi rivers.

The timberclads were actually former freight and passenger paddle-wheeled steamers. Five-inch thick oak covered the outside of the ship, protecting the boilers and paddle-wheels. Each boat was armed with two 32-pound cannons and 8-inch Dahlgren shell guns.

Foote used his gunboats effectively. Before battles began, gunboats engaged and destroyed Confederate artillery in forts. This allowed troops to move into defensive positions without the danger of an artillery attack.

Union Brigadier General Ulysses S. Grant organized a force of 3,114 men for a military demonstration against Columbus to stop the movement of Confederate reinforcements into Missouri. On the evening of November 6, six steamers, supported by the gunboats Lexington and Tyler, left Cairo, Illinois.

On route to Columbus, Grant decided to attack the Confederate camp at Belmont Missouri instead of a demonstration against Columbus. Grant wanted a fight and his troops needed to fight to gain experience. The Union general took a risk attacking a camp located in an area overrun with Confederates. He believed the need justified the outcome.

Confederate Major General Leonidas Polk commanded the fortress of Columbus. On November 6, the day before the battle at Belmont, Polk resigned his military position, to return to his diocese in Louisiana where he was Episcopalian bishop. Confederate President Jefferson Davis did not accept his resignation. Polk continued as commander of western Tennessee and Columbus.

After Columbus fell in 1862, Polk became lieutenant general. He commanded troops at Shiloh, Perryville, Stones River, and Chickamauga. A shell from a Parrot gun killed Polk in the Atlanta campaign of 1864. Polk was not an outstanding combat leader, but held and impressive military bearing and commanding manner.

Polk learned of the Federal movement against Columbus early in the morning of November 7. After moving his Columbus forces into position, Polk ordered Brigadier General Gideon J. Pillow's brigade to Belmont. Pillow's troops carried very little ammunition in their packs.

Colonel James C. Tappan commanded the Confederate troops at Camp Johnson near Belmont, Missouri, just 800 yards across the river from Columbus. At 7:00 AM, Tappan received word from Polk of the Federal gunboats advance along the Missouri shore. Tappan sent out scouts while the remaining troops formed into line of battle. Each soldier received only 20 rounds of ammunition.

Topics. This historical marker is listed in these topic lists: Forts and Castles • War, US Civil • Waterways & Vessels. A significant historical month for this entry is July 1861.