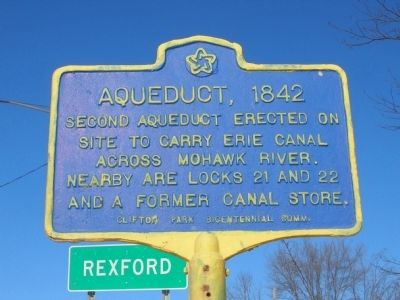 Photographed By Howard C. Ohlhous, January 4, 2009
1. Aqueduct, 1842 Marker
Inscription.
Aqueduct, 1842. .
Aqueduct, 1842 Second aqueduct erected on site to carry Erie Canal across Mohawk River. Nearby are Locks 21 and 22 and a former canal store. . . This historical marker was erected by Clifton Park Bicentennial Commission. It is in Rexford in Saratoga County New York

Aqueduct, 1842
Second aqueduct erected on
site to carry Erie Canal
across Mohawk River.
Nearby are Locks 21 & 22
and a former canal store.

Topics and series. This historical marker is listed in these topic lists: Bridges & Viaducts • Man-Made Features • Waterways & Vessels. In addition, it is included in the Erie Canal series list. A significant historical year for this entry is 1842.

Location. 42° 51.097′ N, 73° 53.251′ W. Marker is in Rexford, New York, in Saratoga County. Marker is on Balltown Road (New York State Route 146), on the right when traveling north. The marker is on the right as you enter the Town of Clifton Park after crossing the bridge over the Mohawk River. Touch for map. Marker is in this post office area: Rexford NY 12148, United States of America. Touch for directions. 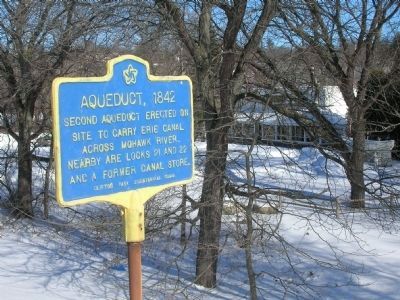 Photographed By Howard C. Ohlhous, January 4, 2009
2. Aqueduct, 1842 Marker
The former Travis Feed Store is in the background beyond the trees.

Regarding Aqueduct, 1842. The Rexford Aqueduct was built to carry the Erie Canal across the Mohawk River in 1842. It was built as part of the enlargement of the Erie Canal and replaced the smaller original Rexford Aqueduct. After the 1842 Rexford aqueduct was build just a few yards east of and down stream of the original aqueduct. The piers of the original aqueduct became the base of a toll bridge across the river. When the current canal system, The Barge Canal System as it was called in 1916, was put in place most of the aqueduct was disassembled to allow navigation in the canalized Mohawk River, yet the state retained portions of the aqueduct for use as the base of a highway bridge across the river. In 1964 the state widened the roadway which is NY Route 146. The Rt. 146 bridge that is there now was designed by the New York State Department of Public Works and opened in 1965. When they built the new bridge, just upstream 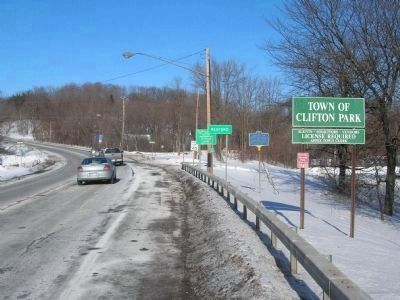 Photographed By Howard C. Ohlhous, January 4, 2009
3. Aqueduct, 1842 Marker
Entering the Town of Clifton Park and the hamlet of Rexford on Rte 146 after crossing the bridge over the Mohawk River.
of the aqueduct, they removed some of the arches of the aqueduct, thus widening the navigable channel. 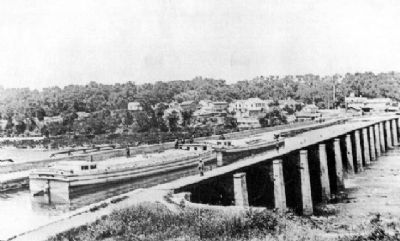 Collection of Joe Connor
4. The 1842 Rexford Aqueduct
This view is of an old photo postcard of the Rexford Aqueduct with two canal boats crossing the Mohawk River on the aqueduct. 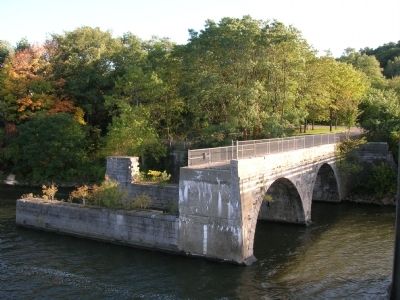 Photographed By Howard C. Ohlhous, October 3, 2008
5. Rexford Aqueduct Remains
This is one of two sections of the aqueduct that remains. These two archs are on the south bank of the Mohawk River. 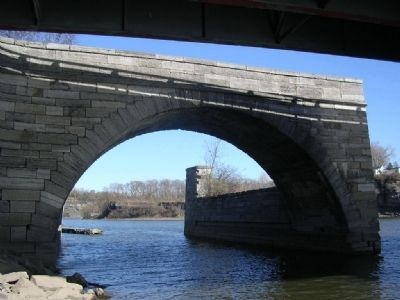 Photographed By Howard C. Ohlhous, April 21, 2005
6. Rexford Aqueduct Remains
This is the single arch of the aqueduct that remains on the north shore of the Mohawk River. 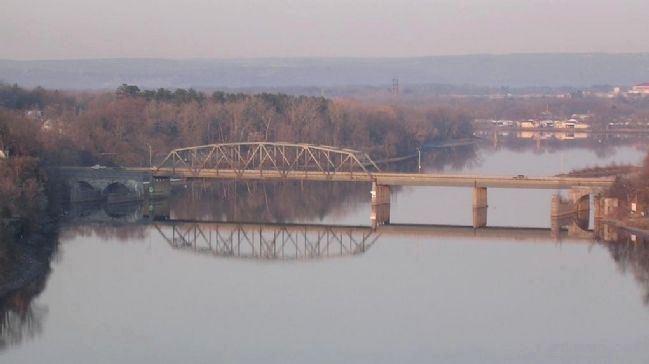 Photographed By Howard C. Ohlhous, March 31, 2005
7. Rexford Bridge
The remaining arches of the aqueduct are beside the Rte 146 bridge on the extreme left and right of the bridge. 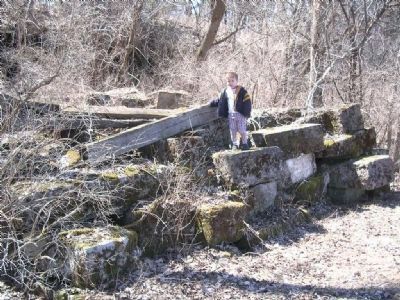 Photographed By Howard C. Ohlhous, April 10, 2005
8. Rexford Aqueduct Dismantled
When the Aqueduct was dismantled by New York State to make way for the Barge Canal the stones were carefully set aside on the dry bed of the canal nearby to await another use someday. 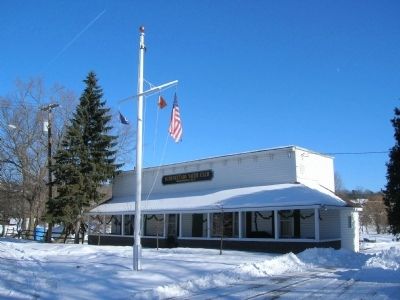 Photographed By Howard C. Ohlhous, January 4, 2009
9. Former Canal Store
The Schenectady Yacht Club building is the former Canal Store nearby. Mickey Travis' canal store was a restaurant, store and saloon because drinks of all kinds were available. It was also a feed store where canawlers could stock up on hay and oats for their mules and horses. And it was a livery where the animals could be temporarily boarded should they develop harness burn, fatigue or simply become an excess for that particular trip. The Yacht Club bought the old Travis building in 1956, after it had been used as a tavern called Cartwright's Grill, much in the Travis tradition. At the time, stalls that had once been used for the canal animals were still in the basement. Straw was still on the floor. The first thing the club did was clear out the cellar, cement the walls and install a concrete floor. 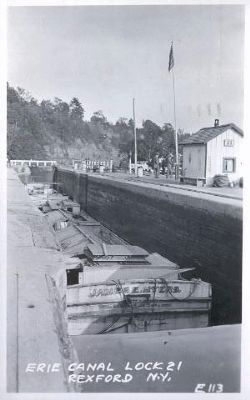 Collection of Joe Connor
10. Old Erie Canal Lock 21 - Rexford, N.Y.
This old photo post card shows a pair of canal boats locking through lock 21. The lock number is on the side of the Lock tender's hut on the right. 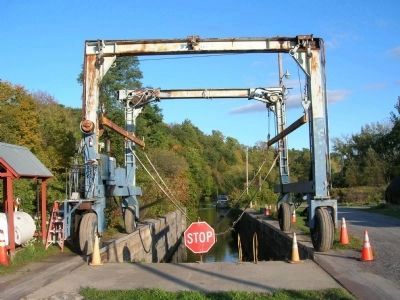 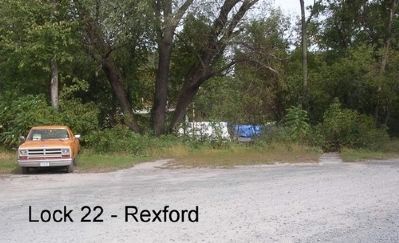 Photographed By Howard C. Ohlhous
12. Old Eric Canal Lock 22 Remains
Lock 22 was right in front of the the Travis Feed Store, which is now the Schenectady Yacht Club. The lock has been filled in, yet the top stones of the lock are visible at the edge of the parking area, and appear as two narrow paths leading off into the weeds. 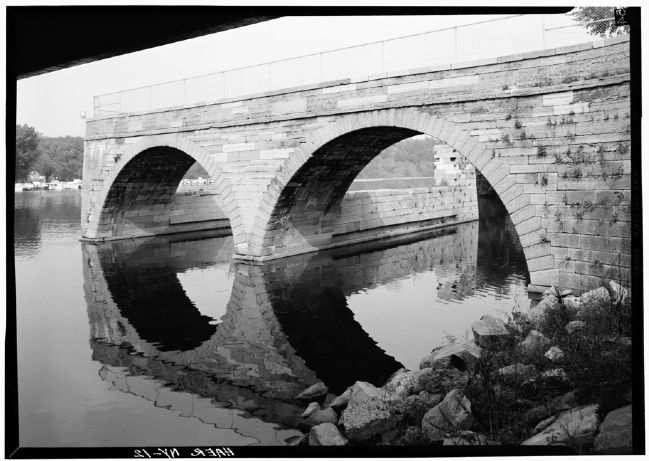