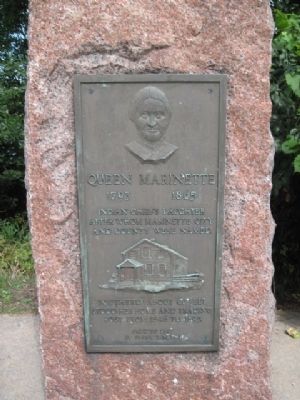 Photographed By Robert L Weber, September 1, 2010
1. Queen Marinette Marker
Inscription.
Queen Marinette. , Indian chief's daughter after whom Marinette City and county were named. Southerly about 60 feet stood her home and trading post from 1846 to 1895. . This historical marker is in Marinette in Marinette County Wisconsin

Indian chief's daughter after whom Marinette City and county were named. Southerly about 60 feet stood her home and trading post from 1846 to 1895.

Topics. This historical marker is listed in these topic lists: Industry & Commerce • Native Americans • Women. A significant historical year for this entry is 1846. 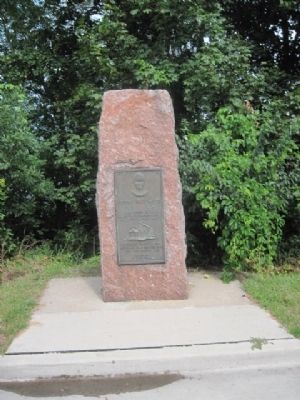 Click or scan to see
this page online
Chevalier Jacobs] 1793 - 1865
fur trader, born in Post Lake, Wis. She was the daughter of a Menominee Indian mother and Bartholemy Chevalier, a French trapper. Her first husband, Jean B. Jacobs, a fur trader and school teacher, deserted her about 1823, and she became the common-law wife of William Farnsworth with whom she lived until he abandoned her about 1833. Farnsworth's successful opposition to John Jacob Astor's American Fur Co. was largely due to Marinette's Menominee kinship and to her skill as a trader. After Farnsworth left her, she carried on the fur trade with her children until about 1854, often advising the Menominee on dealings with white settlers, lumber companies, and the U.S. government. She was well-known for her charity work with impoverished and sick residents of the area, and the city and county of Marinette adopted her name in tribute. She was not a queen, and her name "Marie-nette" (Little Marie) was probably used to distinguish her from other girls named Marie. Some authors have also speculated that it was a contraction of Marie Antoinette, Queen of France, who died the same year Marinette was born.
Credits. This page was last revised on May 5, 2018. It was originally submitted on December 18, 2010, by Bob (peach) Weber of Dewey, Arizona. This page has been viewed 1,016 times since then and 61 times this year. Last updated on December 23, 2010, by Bob (peach) Weber of Dewey, Arizona. Photos:   1, 2. submitted on December 18, 2010, by Bob (peach) Weber of Dewey, Arizona. • Bill Pfingsten was the editor who published this page.
Share this page.