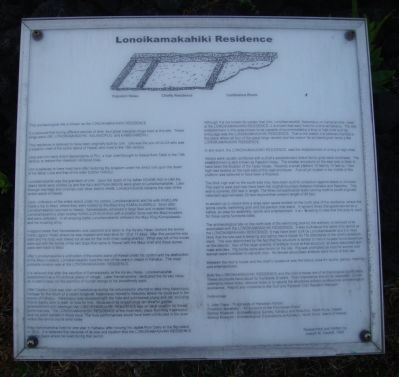 This archaeological site is known as the Lonoikamakahiki Residence.

It is believed that during different periods of time, four great Hawaiian kings lived at this site. These kings were Umi, Lonoikamakahiki, Kalaniopuu, and Kamehameha I.

This residence is believed to have been originally built by Umi. Umi was the son of Liloa who was a superior chief of the entire island of Hawaii who lived in the 15th century.

Liloa and Umi were direct descendants of Pili, a high chief brought to Hawaii from Tahiti in the 13th century to restore the Hawaiian Alii blood lines.

Umi is believed to have lived here after restoring the kingdom under his direct rule upon the death of his father Liloa and that of his older brother Hakau.

Lonoikamakahiki was the grandson of Umi. Upon the death of his father Keawe-nui-a-umi the island lands were divided up and the Ka'u and Puna districts were given to Lonoikamakahiki. Later through marriage and victories over other district chiefs, Lonoikamakahiki became the ruler of the entire island of Hawaii. 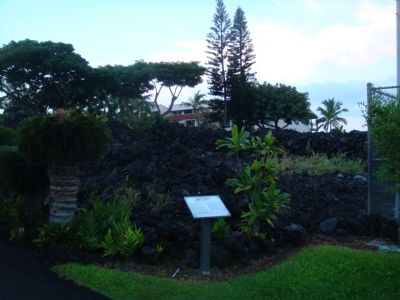 A legend exists that Kamalalawalu was captured and taken to the Ke'eku Heiau (behind the former Kona Lagoon Hotel) where he was impaled and kept alive for 10 or 11 days. After this period he was slain and his body was towed out to sea for the niuhi (man eating sharks). What was left of his bones were put with the bones of his two dogs that came to Hawaii with the Maui chief and these bones were sent back to Maui.

After Captain Cook was slain at Kealakekua during his unsuccessful attempt to take King Kalaniopuu hostage for the return of a stolen longboat, Kalaniopuu moved to Keauhou where he could surf in the waves of Kahaluu. Kalaniopuu was obsessed with the hula and summoned young and old, including infants barely able to walk, to hula for him. Because of its large Kahua (an area for games, entertainment and meetings), the Lonoikamakahiki Residence was an ideal location for these performances. The Lonoikamakahiki Residence is the most likely place that King Kalaniopuu and his court resided in those days. The hula performances would have been conducted in the area where the tennis courts exist today.

King Kamehameha lived for one year in Kahaluu after moving his capital from Oahu to the Big Island in 1812. It is believed that because of its size and location that the Lonoikamakahiki Residence was the place where he lived during that period.

In any event, the Lonoikamakahiki Residence was the establishment of a king or high chief.

Heiaus were usually combined with a chief's establishment where family gods were worshiped. This establishment is also known as Kapukini heiau. The smaller enclosure on the east side is likely to have been the location of the heiau house. Recently a small platform 18 feet by 15 feet by 1 foot high had existed on the east side of this east enclosure. A amall pit located in the middle of this platform is believed to have been a fireplace.

The thick high wall on the south side may have been built for protection against attack or intrusion. This east to west wall may have been the original boundary between Kahaluu and Keauhou. This wall is currently 250 feet in length. The three compartmental walls running north to south originally extended approximately 50 feet beyond their present length of 65 feet.

In ancient up to recent time a large open space existed on the north side of the residence, where the tennis courts, swimming pool and the pavilion now stand. In ancient times this space served as a kahau, an area for assembly, sports and entertainment. It is interesting to note that this area is used for these same functions today.

The archaeological site on the north side of the swimming pool [see the nearby Hale Mua marker] by the walkway is believed to be associated with the Lonoikamakahiki Residence. It was built about the same time period as the Lonoikamakahiki Residence. It may have been built by Lonoikamakahiki and it is most likely that the site was a sleeping and eating men's house for the attendants of the chief's establishment. This was determined by the fact that the structure is similar to men's houses found elsewhere on the islands. Also of the large quantity of artifacts found at that structure, all were associated with male activities. Pig bones were also found on the site. Pig was prohibited as food for women and women were forbidden to eat with men. No female-associated artifacts were found at that site.

Between the men's house and the chief's residence was the kahua (area for sports, games, meetings and entertainment).

Both the Lonoikamakahiki Residence and the men's house are of archaeological significance. These structures have stood for hundreds of years. Their importance should be respected. Do not attempt to move rocks, remove rocks or to rebuild the structures without professional archaeological assistance. Report any violations to the Surf and Racquet Club Resident Manager.

Topics. This historical marker is listed in these topic lists: Anthropology & Archaeology • Native Americans. A significant historical year for this entry is 1812.

Location. 19° 34.37′ N, 155° 58.012′ W. Marker is in Keauhou, Hawaii, in Hawaii County. Marker can be reached from Alii Drive, half a mile north of Kamehameha III Road, on the left when traveling north. The marker is on the grounds of the Keauhou Kona Surf and Racquet Club, which is a gated community. The Club must allow public shoreline access and, therefore, the marker is presumably accessible to the public. Park on the road near the gate. The marker is just inside the gate at the southeast corner of the tennis courts. Touch for map. Marker is at or near this postal address: 78-6800 Alii Drive, Keauhou HI 96739, United States of America. Touch for directions.