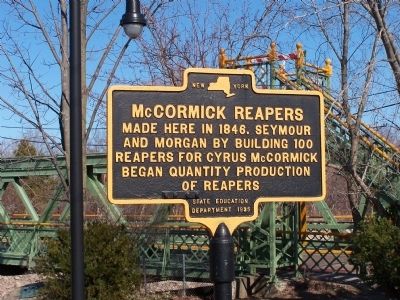 By Pamela Scott, March 19, 2011
1. McCormick Reapers Marker
Inscription.
McCormick reapers made here in 1846. Seymour and Morgan by building 100 reapers for Cyrus McCormick began quantity production of reapers . This historical marker was erected in 1935 by New York State Education Department. It is in Brockport in Monroe County New York

McCormick reapers made here in 1846. Seymour and Morgan by building 100 reapers for Cyrus McCormick began quantity production of reapers

Topics. This historical marker is listed in these topic lists: Agriculture • Industry & Commerce. A significant historical year for this entry is 1846. 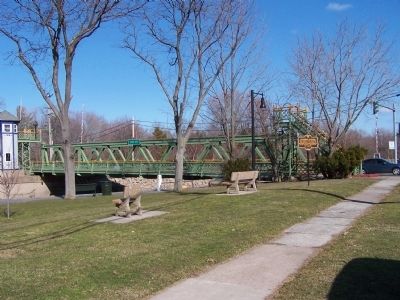 Click or scan to see
this page online
away); American Revolutionary War Memorial (approx. 0.2 miles away); Morgan-Manning House (approx. ¼ mile away). Touch for a list and map of all markers in Brockport.

Regarding McCormick Reapers. Cyrus McCormick began work on a reaper in 1831 but could not solve the problem of producing them in quantity. He came to Brockport in 1845 and hired Backus, Fitch, and Co. to make 100 reapers. None of these worked. McCormick then hired Seymour, Morgan, and Roby who successfully produced 100 machines. ("Around Brockport" by William G. Andrews) 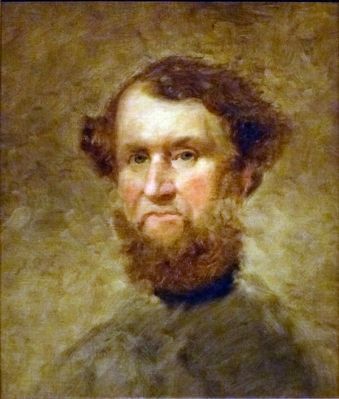 “Territorial expansion generated a spirit of technological adventure and a search for new methods to handle the unique conditions of American life. Cyrus McCormick, a farmer in Virginia's Shenandoah Valley, succeeded where his father had failed by constructing the first practical reaping machine. This reaper was a first step in the mechanization of American agriculture, allowing the efficient cultivation of large tracts of farmland by small numbers of farmers. This industrialization of the land allowed the United States to boost agricultural production to unprecedented levels and to feed growing cities and industrial towns. McCormick's design was pirated by competitors, but he overcame his rivals by founding his own factory outside Chicago in 1847. There, he contributed to the pace of industrial growth by using standardized parts and assembly-line production methods that had been pioneered by Samuel Colt and others.” — National Portrait Gallery
Credits. This page was last revised on June 16, 2016. It was originally submitted on March 21, 2011, by Pamela Scott of Brockport, New York. This page has been viewed 663 times since then and 27 times this year. Photos:   1, 2. submitted on March 21, 2011, by Pamela Scott of Brockport, New York.   3. submitted on November 30, 2015, by Allen C. Browne of Silver Spring, Maryland. • Bernard Fisher was the editor who published this page.
Share This Page.