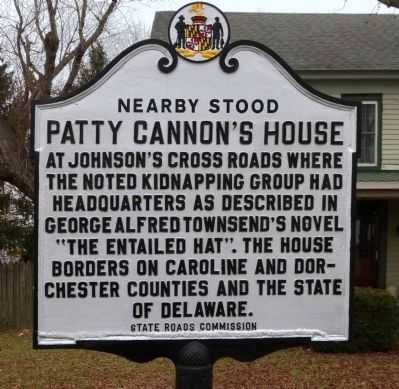 By Allen C. Browne, February 9, 2014
1. Neaby Stood
Patty Cannon's House Marker
The words "Nearby Stood" have been added to the marker to disabuse readers of the thought that the house behind the marker is Patty Cannon's house.
Inscription.
Nearby Stood Patty Cannon's House. . At Johnson's cross roads where the noted kidnapping group had headquarters as described in George Alfred Townsend's novel "The Entailed Hat". The house borders on Caroline and Dorchester Counties and the State of Delaware. . This historical marker was erected in 1939 by State Roads Commission. It is in Reliance in Dorchester County Maryland

At Johnson's cross roads where the noted kidnapping group had headquarters as described in George Alfred Townsend's novel "The Entailed Hat". The house borders on Caroline and Dorchester Counties and the State of Delaware.

Other nearby markers. At least 8 other markers are within 5 miles of this marker, measured as the crow flies. The Cannon / Johnson Kidnapping Gang (within shouting distance of this marker in Delaware); Oak Grove Crownstone (approx. 2.9 miles away in Delaware); Bethel Church 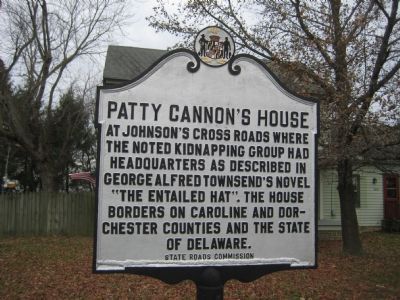 More about this marker. The location of the marker implies that the house behind it is the Patty Cannon house. However, a PBS TV Show "History Detectives" determined that this house was built some time after Patty Cannon's death in 1829, and that the real Cannon house was located maybe a few hundred yards away and demolished in 1948. According to Charles Adams "Roadside Markers in Maryland", 2002, the marker was erected by the State Roads Commission in 1939 at which time the real Patty Cannon house would have been standing nearby.

Regarding Nearby Stood Patty Cannon's House. The marker only hints at the sinister activities of Patty Cannon and her gang of kidnappers. She and her accomplices (and no doubt many others) would kidnap slaves and free blacks and transport them to the deep south where they would be sold for a high profit. Cannon's prey were imprisoned, tortured, and occasionally killed at her home in the attic, basement, and hidden rooms. Cannon was eventually arrested and died in jail, supposedly by suicide.

An 1884 book, "The Entailed Hat" by George Alfred Townsend, describes the activities of Patty Cannon and her gang. For more information, see the Wikipedia and PBS pages on Patty Cannon. 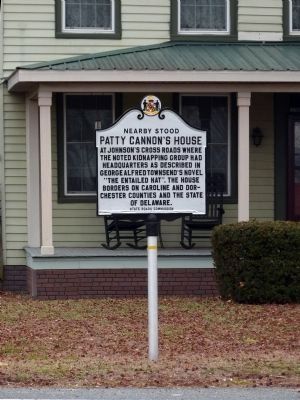 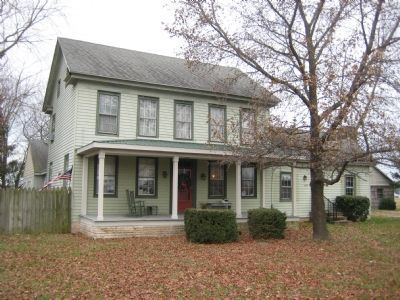