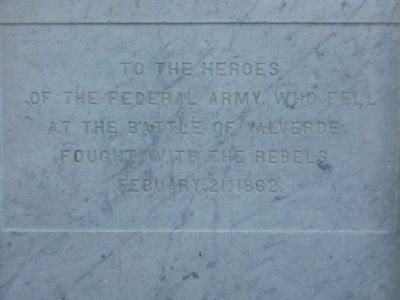 (South face):
To the Heroes
of the Federal Army, who fell
at the Battle of Valverde.
Fought with the Rebels
February 21, 1862

(West face):
To the Heroes
of the Federal Army, who fell
at the Battles of Cañon Del
Apache and Pigeon's Rancho
(La Glorieta) fought with the
Rebels March 28, 1862, and to
those who fell at the Battle
fought with the Rebels at
Peralta, April 15, 1862.

(North face):
To the Heroes
Who have fallen in the
Various battles with
Indians in the Territory
of New Mexico.

(East face):
Erected
By the People of New Mexico
Through their Legislatures
of 1866 – 7 – 8
May the Union be Perpetual


Erected 1868 by The People of New Mexico Through their Legislatures.

Topics. This memorial is listed in these topic lists: War, US Civil • Wars, US Indian. 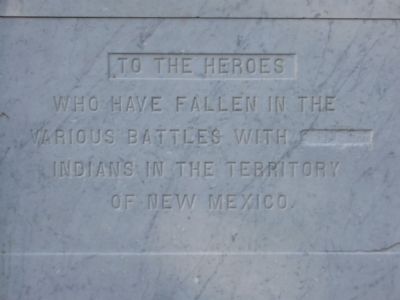 Additional commentary.
1. Word chiseled out of marker
There is a word that was chiseled out of the inscription on the north side of the marker. From the bronze plaque in Figure 6, and the context of the inscription, it is clear that the word that was removed was the offensive word "savage".
— Submitted June 6, 2018, by Kevin Vincent of Arlington, Virginia.
2. Monument toppled.
On Columbus Day, Monday, October 12th, 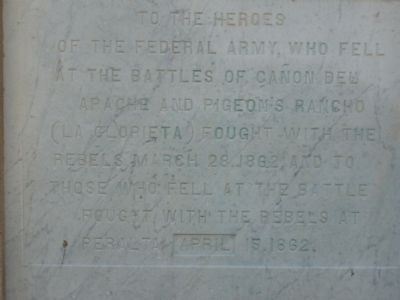 By Bill Kirchner, July 23, 2011
3. To the Heroes Marker
West face
about 40 people took almost 20 minutes to pull down the obelisk with chains and ropes. City crews removed what was left of the obelisk. Police arrested two individuals. The monument base was not damaged, nor its four inscribed marble plaques.

An online comment was made "...This will no doubt end racism and oppression."
— Submitted December 22, 2020, by Mark Hilton of Montgomery, Alabama. 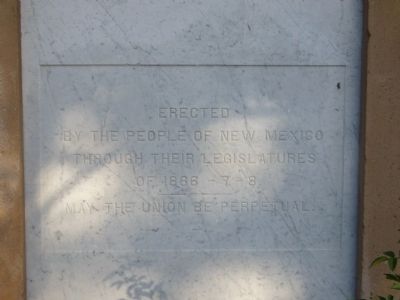 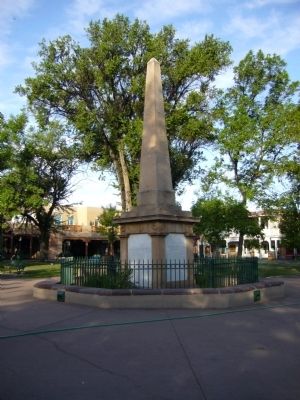 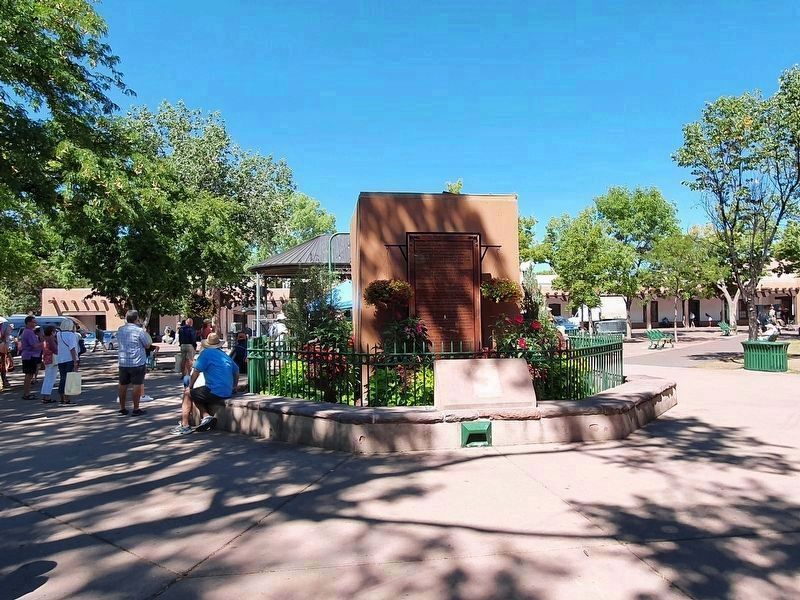 By J. Makali Bruton, August 24, 2021
6. To the Heroes Marker
The obelisk of the monument was torn down on October 12, 2020. The base with the inscriptions is currently blocked from view by a structure. It includes the text of Santa Fe Resolution 2021-6, "A Resolution Hosting Community Conversations on Santa Fe's Cultures, Histories, Art, Reconciliation, and Truth." 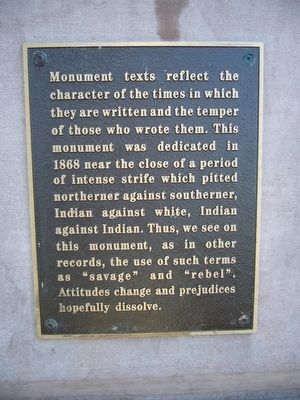 By Bill Kirchner, July 23, 2011
7. An additional marker near the To The Heroes Monument
Monument texts reflect the character of the times in which they are written and the temper of those who wrote them. This monument was dedicated in 1868 near the close of a period of intense strife which pitted northerner against southerner, Indian against white, Indian against Indian. Thus, we see on this monument, as in other records, the use of such terms as "savage" and "rebel". Attitudes change and prejudices hopefully dissolve. 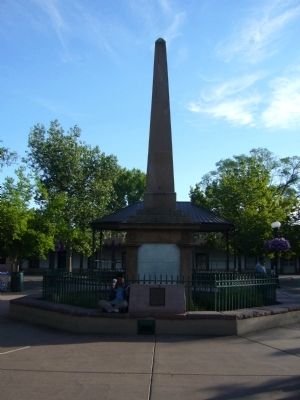