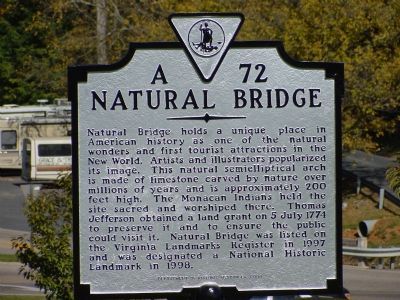 Photographed By J. J. Prats, October 14, 2000
1. Natural Bridge Marker
Inscription.
Natural Bridge holds a unique place in American history as one of the natural wonders and first tourist attractions in the New World. Artists and illustrators popularized its image. This natural semielliptical arch is made of limestone carved by nature over millions of years and is approximately 200 feet high. The Monacan Indians held the site sacred and worshiped there. Thomas Jefferson obtained a land grant on 5 July 1774 to preserve it and to ensure the public could visit it. Natural Bridge was listed on the Virginia Landmarks Register in 1997 and was designated a National Historic Landmark in 1998. . This historical marker was erected in 2000 by Department of Historic Resources. It is in Natural Bridge in Rockbridge County Virginia

Natural Bridge holds a unique place in American history as one of the natural wonders and first tourist attractions in the New World. Artists and illustrators popularized its image. This natural semielliptical arch is made of limestone carved by nature over millions of years and is approximately 200 feet high. The Monacan Indians held the site sacred and worshiped there. Thomas Jefferson obtained a land grant on 5 July 1774 to preserve it and to ensure the public could visit it. Natural Bridge was listed on the Virginia Landmarks Register in 1997 and was designated a National Historic Landmark in 1998.

Erected 2000 by Department of Historic Resources. (Marker Number A-72.)

Topics and series. This historical marker is listed in these topic lists: Bridges & Viaducts • Landmarks • Natural Features • Roads & Vehicles. In addition, it is included in the Former U.S. Presidents: #03 Thomas Jefferson, the George Washington Slept Here, the National Historic Landmarks, and the Virginia Department of Historic Resources series lists. A significant historical date for this entry is July 5, 1774. 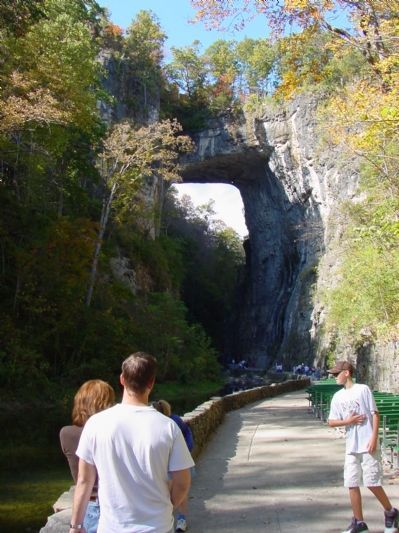 Click or scan to see
this page online
37° 37.761′ N, 79° 32.581′ W. Marker is in Natural Bridge, Virginia, in Rockbridge County. Marker is on Rockbridge Road / Wert Faulkner Highway (Virginia Route 130), on the right when traveling east. Visitors center is on US Route 11 just off Interstate 81 south of the junction with Interstate 64 west. Touch for map. Marker is in this post office area: Natural Bridge VA 24578, United States of America. Touch for directions.

More about this marker. This marker replaced a 1930s marker with the same number and title. The inscription on that marker read “Legend says that the Monocan Indians called it ‘The Bridge of God’ and worshipped it. Thomas Jefferson was the first American owner, patenting it with 157 acres on July 5, 1774, ‘for twenty shillings of good and lawful money.’ Millions of years old, Natural Bridge is considered one of the seven natural wonders of the world.”

Lee Highway, US Route 11, crosses over the chasm on Natural Bridge itself. See photo No. 8.

Also see . . .  The Natural Bridge Zoological Park. Home to the largest, most complete collection of animals and birds in the 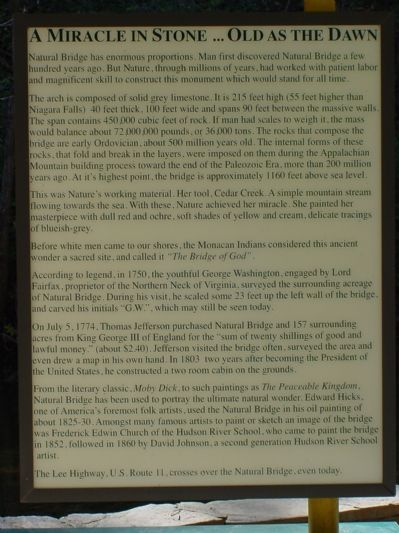 Photographed By J. J. Prats, October 14, 2000
3. About this Natural Wonder
state of Virginia and breeding center for rare and endangered species. (Submitted on December 31, 2005, by J. J. Prats of Powell, Ohio.)

Additional commentary.
1. A Miracle in Stone . . . Old as the Dawn
The Text on Photograph No. 3:

“ Natural Bridge has enormous proportions. Man first discovered Natural Bridge a few hundred years ago. But Nature, through millions of years, had worked with patient labor and magnificent skill to construct this monument which would stand for all time.

“ The arch is composed of solid grey limestone. It is 215 feet high (55 feet higher than Niagara Falls) 40 feet thick, 100 feet wide and spans 90 feet between massive walls. The span contains 450,000 cubic feet of rock. If man had scales to weigh it the mass would balance about 72,000,000 pounds, or 36,000 tons. The rocks that compose the bridge are early Ordovician, about 500 million years old. The internal forms of these rocks, that fold and break in layers, were imposed on them during the Appalachian Mountain building process toward the end of the Paleozoic Era, more than200 million years ago. At it's highest point, the bridge is approximately 1160 feet above sea level.

“ This was nature's working material. Her tool, 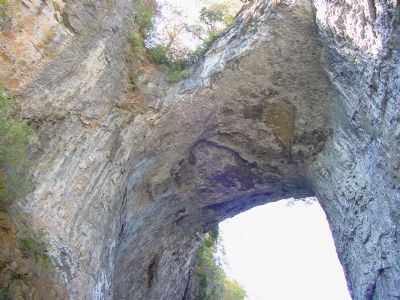 Photographed By J. J. Prats, October 14, 2000
4. Under Natural Bridge Looking Up
US Route 11 runs along the top of the rock formation. This was the main road between Roanoke and Staunton before Interstate 81 was built. US 11 runs from the Canadian border at Champlain, New York, to New Orleans, Louisiana.
Cedar Creek. A simple mountain stream flowing towards the sea. With these, Nature achieves her miracle. She painted her masterpiece with dull red and ochre, soft shades of yellow and cream, delicate tracings of blueish-grey.

“ Before white men came to our shores, the Monacan Indians considered this ancient wonder a sacred site, and called it ‘The Bridge of God.’

“ According to legend, in 1750, the youthful George Washington, engaged by Lord Fairfax, proprietor of the Northern Neck of Virginia, surveyed the surrounding acreage of Natural Bridge. During his visit he scaled some 23 feet up the left wall of the bridge, and carved his initials ‘G.W.’, which may still be seen today.

“ On July 5, 1774, Thomas Jefferson purchased Natural Bridge and 157 surrounding acres from King George III of England for the ‘sum’ of twenty shillings of good and lawful money (about $2.40). Jefferson visited the bridge often, surveyed the area and even drew a map in his own hand. In 1803 two years after becoming President of the United States, he constructed a two room cabin on the grounds.

“ From the literary classic, Moby Dick, to such paintings as The Peaceable Kingdom, Natural Bridge has been used to portray the ultimate natural wonder. Edward Hicks, one of America's foremost folk artists, used the Natural Bridge on his 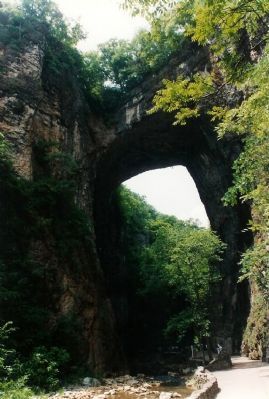 Photographed By Michael Stroud, June 1994
5. The Natural Bridge View from 1994
oil painting of about 1825-30. Amongst many famous artists to paint or sketch an image of the bridge was Frederick Edwin Church of the Hudson River School, who came to paint the bridge in 1852, followed in 1860 by David Johnson, a second generation Hudson River School artist. 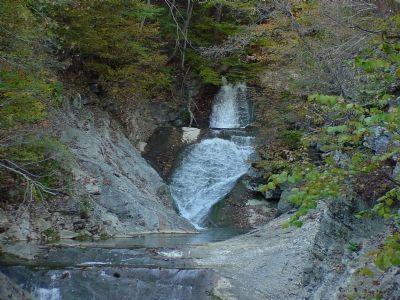 Photographed By J. J. Prats, October 14, 2000
6. Lace Waterfalls
The waterfalls are just beyond (west of) Natural Bridge, and reachable on the concrete path. 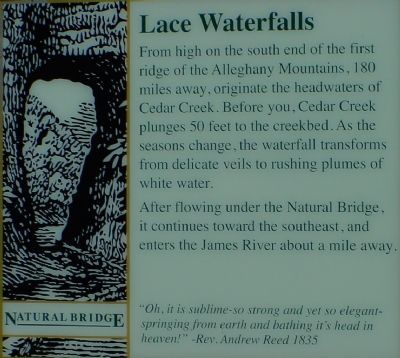 Photographed By J. J. Prats, October 14, 2000
7. About Lace Waterfalls
From high on the south end of the first ridge of the Alleghany Mountains 180 miles away, originate the headwaters of Cedar Creek. Before you, Cedar Creek plunges 50 feet to the creekbed. As the seasons change, the waterfall transforms from delicate veils to rushing plumes of white water. After flowing under Natural Bridge, it continues towards the southeast, and enters the James River about a mile away. "Oh, it is sublime—so strong yet so elegant—springing from earth and bathing it's head in heaven!" —Rev. Andrew Reed 1835 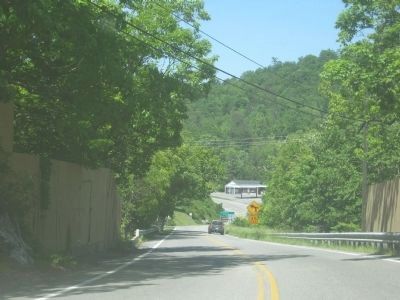 Photographed By Edward John Cunningham, May 25, 2008
8. Photo of Route 11 as it goes over Natural Bridge.
The wooden panels on either side can also be seen from the bottom of the gorge and identify where the bridge exactly is. 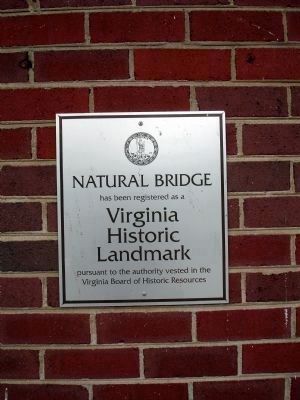