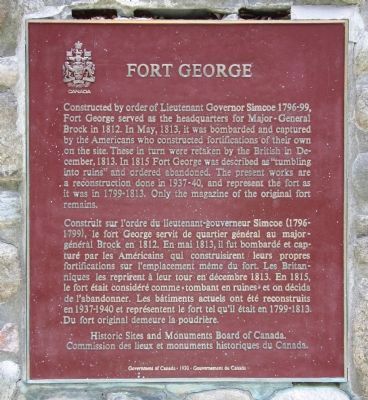 Constructed by order of Lieutenant-Governor Simcoe 1796-99, Fort George served as the headquarters for Major-General Brock in 1812. In May, 1813, it was bombarded and captured by the Americans who constructed fortifications of their own on the site. These in turn were retaken by the British in December 1813. In 1815 Fort George was described as "tumbling into ruins" and ordered abandoned. The present works are a reconstruction done in 1937-40, and represents the fort as it was in 1799-1813. Only the magazine of the original fort remains. 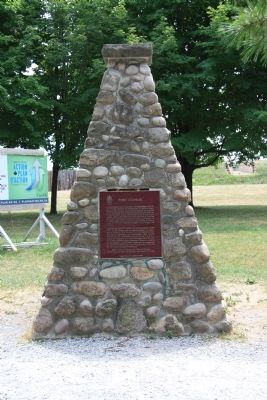 Topics. This historical marker is listed in these topic lists: Colonial Era • Forts and Castles • War of 1812. A significant historical month for this entry is May 1813.

Location. 43° 15.115′ N, 79° 3.788′ W. Marker is in Niagara-on-the-Lake, Ontario, in Niagara Region. Marker can be reached from Queens Parade south of Wellington Street. This historic marker is located on the grounds of a national historic park. On the map this historic marker appears to be near the end of Bryon Street, but in order to see this historic marker one should probably pull into the parking lot of the national park, which is just off of the roadway called the Queens Parade. Once you park your vehicle the historical marker is just a short walk away along the pathway that leads to the fort's visitor center. Touch for map. Marker is in this post office area: Niagara-on-the-Lake ON L0S 1J0, Canada. Touch for directions. 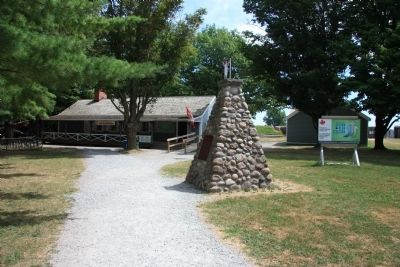 Also see . . .  Fort George, Ontario. This is a link to information provoded by Wikipedia, the free encyclopedia. (Submitted on November 3, 2011, by Dale K. Benington of Toledo, Ohio.) 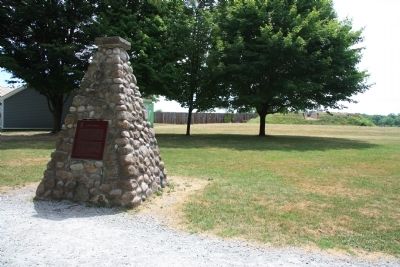 Photographed By Dale K. Benington, July 27, 2011
4. Fort George Marker
View of the historic marker in the foreground, with a distant view of the outer walls of the fort in the background. 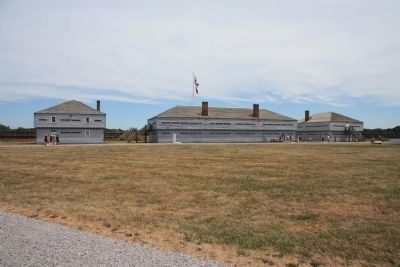 Photographed By Dale K. Benington, July 27, 2011
5. Fort George
View of the interior of the fort and several of the fort's buildings. 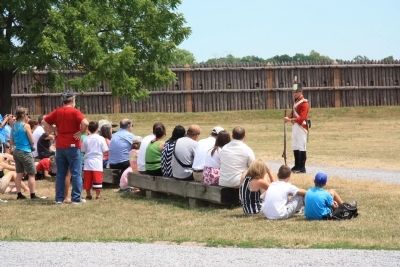 Photographed By Dale K. Benington, July 27, 2011
6. Fort George
View of a historic reenactor putting on a demonstration for the visitors to Fort George. 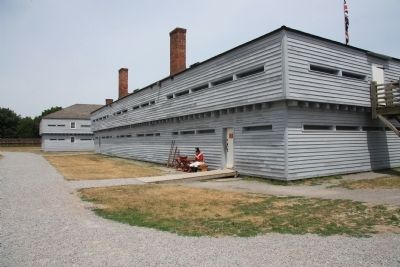