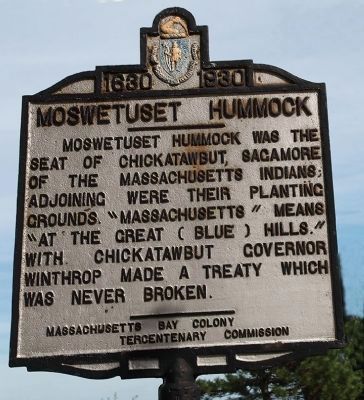 Moswetuset Hummock was the seat of Chickatawbut, Sagamore of the Massachusetts Indians; adjoining were their planting grounds. "Massachusetts" means "at the Great (Blue) Hills." With Chickatawbut Governor Winthrop made a treaty which was never broken.

Topics and series. This historical marker is listed in these topic lists: Colonial Era • Native Americans. In addition, it is included in the Massachusetts Bay Colony—Tercentenary Commission Markers series list.

Location. 42° 17.254′ N, 71° 1.377′ W. Marker is in Quincy, Massachusetts, in Norfolk County. Marker is on Quincy Shore Drive 0.1 miles east of Squantum Street, on the right when traveling west. Touch for map. Marker is in this post office area: Quincy MA 02171, United States of America. Touch for directions.

Other nearby markers. At least 8 other markers are within 3 miles of this marker, measured as the crow flies. William Hutchinson's Grant (approx. 1½ miles away); Sailors Home Cemetery (approx. 1.7 miles away); Dorchester Vietnam Veterans Memorial (approx. 2 miles away); Domenico D’Alessandro