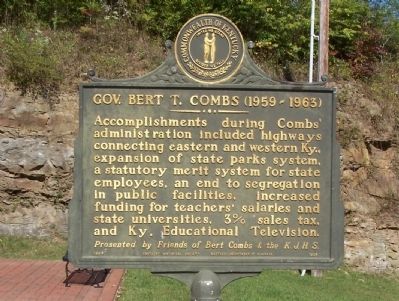 Erected 1964 by Presented by Friends of Bert Combs and the K. J. H. S./Kentucky Historical Society and Kentucky Department of Highways. (Marker Number 1929.)

Topics and series. This historical marker is listed in these topic lists: Civil Rights 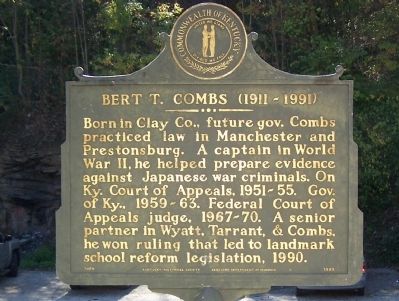 Click or scan to see
this page online
• Education • Parks & Recreational Areas • War, World II. In addition, it is included in the Kentucky Historical Society series list. A significant historical year for this entry is 1990.

Location. 37° 9.231′ N, 83° 45.776′ W. Marker is in Manchester, Kentucky, in Clay County. Marker is on Town Branch Road, on the right when traveling west. Located in a small park behind the Clay County Courthouse. Touch for map. Marker is in this post office area: Manchester KY 40962, United States of America. Touch for directions.

Other nearby markers. At least 8 other markers are within 11 miles of this marker, measured as the crow flies. County Named, 1806 (within shouting distance of this marker); Salt Works was located along the old Warrior's Path (approx. half a mile away); This Site is Birth Place of Local History (approx. half a mile away); Goose Creek Salt Works (approx. 2.2 miles away); A Masterful Retreat (approx. 2.3 miles away); Chief Red Bird (approx. 10 miles away); John Gilbert, Sr. Memorial Highway (approx. 10 miles away); Oneida Baptist Institute (approx. 10.1 miles away). Touch for a list and map of all markers in Manchester.
Credits. This page was last revised on November 19, 2019. It was originally submitted on November 5, 2011, by David J Gaines of Pinson, Alabama. This page has been viewed 405 times since then and 5 times this year. Photos:   1, 2. submitted on November 5, 2011, by David J Gaines of Pinson, Alabama. • Craig Swain was the editor who published this page.
Share This Page.