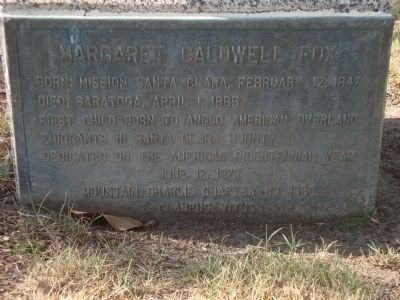 Topics and series. This historical marker is listed in these topic lists: Cemeteries & Burial Sites • Settlements & Settlers • Women. In addition, it is included in the E Clampus Vitus series list.

Location. 37° 18.028′ N, 121° 51.521′ W. Marker is in San Jose, California, in Santa Clara County. Marker can be reached from Curtner Avenue, on the right when traveling east. This marker is attached to the Fox tombstone which is located in the northeast part (there are four) of Section I in Oak Hill Cemetery. The cemetery is located at the intersection of Curtner Avenue and Monterey Highway (State Route 82). Touch for map. Marker is at or near this postal address: 300 Curtner Avenue, San Jose CA 95125, United States of America. Touch for directions.

Other nearby markers. At least 8 other markers are within walking distance of this marker. Montgomery Maze (about 300 feet away, measured in a direct line); Dr. Louis H. and Anna M. (Grandma) Bascom (about 500 feet away); William Henry Eddy 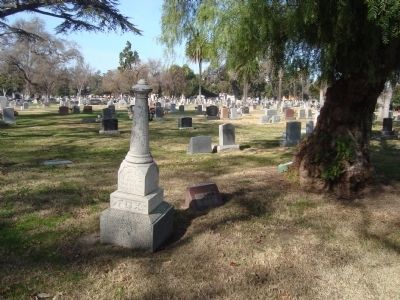 By Barry Swackhamer, January 29, 2012
2. Margaret Caldwell Fox Marker
(about 800 feet away); Jean Jacques Vioget (approx. 0.2 miles away); Dr. John Townsend (approx. 0.2 miles away); George Donner, Jr. (approx. ¼ mile away); Charles Henry McKiernan (approx. ¼ mile away); History of Vieira Park (approx. 0.9 miles away). Touch for a list and map of all markers in San Jose.
Credits. This page was last revised on October 23, 2019. It was originally submitted on February 4, 2012, by Barry Swackhamer of Brentwood, California. This page has been viewed 698 times since then and 69 times this year. Photos:   1, 2. submitted on February 4, 2012, by Barry Swackhamer of Brentwood, California. • Syd Whittle was the editor who published this page.
Share This Page.