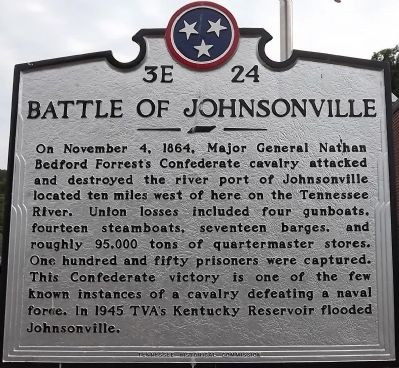 By Ken Smith, August 6, 2011
1. Battle of Johnsonville Marker
Inscription.
Battle of Johnsonville. . On November 4, 1864, Major General Nathan Bedford Forrest's Confederate cavalry attacked and destroyed the river port of Johnsonville located ten miles west of here on the Tennessee River. Union losses included four gunboats, fourteen steamboats, seventeen barges, and roughly 95,000 tons of quartermaster stores. One hundred and fifty prisoners were captured. This Confederate victory is one of the few known instances of a cavalry defeating a naval force. In 1945 TVA's Kentucky Reservoir flooded Johnsonville. . This historical marker was erected by Tennessee Historical Commission. It is in Waverly in Humphreys County Tennessee

Marker series. This marker is included in the Tennessee Historical Commission marker series. 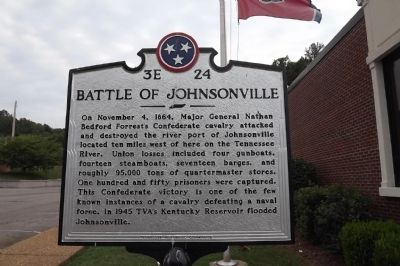