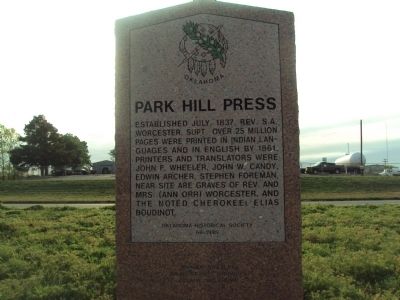 Topics and series. This historical marker is listed in these topic lists: Cemeteries & Burial Sites • Communications • Native Americans • Settlements & Settlers. In addition, it is included in the Oklahoma Historical Society series list. A significant historical year for this entry is 1837.

Location. 35° 51.798′ N, 94° 58.574′ W. Marker is in Park Hill, Oklahoma, in Cherokee County. Marker is on South Muskogee Avenue (U.S. 62) 0.1 miles north of Crestwood Drive, on the right when traveling north. Marker is located in a pulloff on the east side of Oklahoma 10 south of Tahlequah. Touch for map. Marker is in this post office area: Tahlequah OK 74464, United States of America. Touch for directions.

Other nearby markers. At least 8 other markers are within 9 miles of this marker

Editor’s want-list for this marker. Wide area shot of marker and its surroundings. • Can you help?
Share this page.