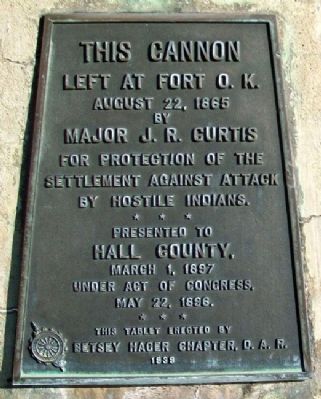 By William Fischer, Jr., February 18, 2012
1. Fort O. K. Cannon Marker
Inscription.
Fort O. K. Cannon. .
This Cannon left at Fort O. K. August 22, 1865 by Major J. R. Curtis for protection of the settlement against attack by hostile Indians. Presented to Hall County, March 1, 1897 under Act of Congress, May 22, 1896.. . This historical marker was erected in 1939 by Betsey Hager Chapter, Daughters of the American Revolution. It is in Grand Island in Hall County Nebraska

This Cannon
left at Fort O. K.
August 22, 1865
by
Major J. R. Curtis
for protection of the
settlement against attack
by hostile Indians.

Erected 1939 by Betsey Hager Chapter, Daughters of the American Revolution.

Topics and series. This historical marker is listed in these topic lists: Man-Made Features • Native Americans • Settlements & Settlers • Wars, US Indian. In addition, it is included in the Daughters of the American Revolution series list.

Other nearby markers. At least 8 other markers are within walking distance of this marker. Civil War and Spanish-American War Memorial 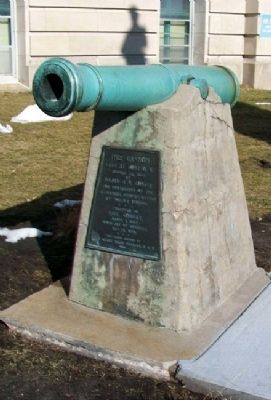 The first settlers of Hall County, Nebraska, nearly all of whom were German immigrants, arrived on July 5, 1857. They platted Grand Island City and established farms. The O.K. Store of Henry A. Koenig and Fred Wiebe, located near the Mormon Trail, was opened near this site in 1862. It was the first store in the settlement and it also served as the first telegraph station.

During the Indian uprising of 1864 and 1865 many Platte Valley settlers fled but the Grand Island settlers remained. They fortified the O.K. Store with a sod stockade which sheltered 68 men and 100 women. To give shelter to 35 more persons, William Stolley built "Fort Independence" about two miles west.

On August 22, 1865, General S. R. Curtis and his troops visited "Fort O.K." Impressed by the settlers' preparations for defense Curtis left a six-pounder cannon, which is still preserved in Hall County. Because of the fortifications "Fort O.K." and Grand Island escaped Indian attacks.