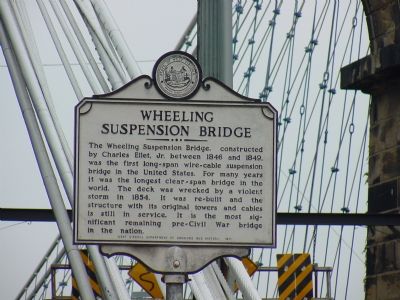 The Wheeling Suspension Bridge, constructed by Charles Ellet, Jr. between 1846 and 1849, was the first long-span wire-cable suspension bridge in the United States. For many years it was the longest clear-span bridge in the world. The deck was wrecked by a violent storm in 1854. It was re-built and the structure with its original towers and cables is still in service. It is the most significant remaining pre-Civil War bridge in the nation.

Erected 1971 by the West Virginia Department of Archives and History.

Topics and series. This historical marker is listed in these topic lists: Bridges & Viaducts • Landmarks • Notable Buildings • Roads & Vehicles. In addition, it is included in the West Virginia Archives and History series list. A significant historical year for this entry is 1846. 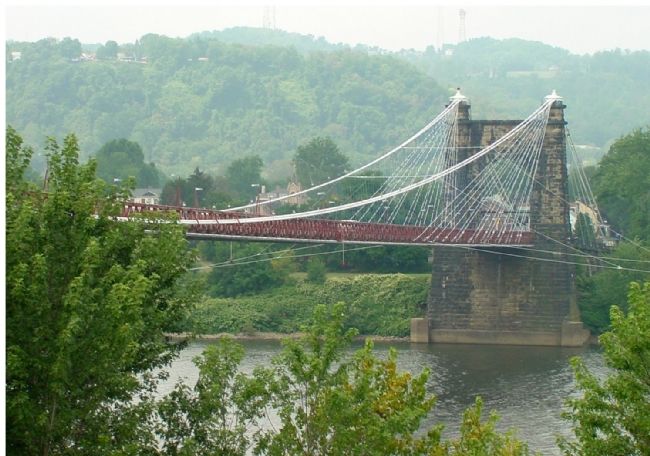 A 1953 report by the consulting engineers Howard, 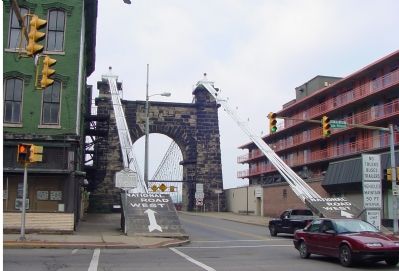 Photographed By J. J. Prats, August 27, 2006
3. Wheeling Suspension Bridge and Marker
Needles, Tammen and Bergendorff indicates that the main cables of the bridge are either original or are additions dating from the 1860 reconstruction.

The date of the existing stiffening truss is unknown. It is a classic Howe timber truss with cast iron joint fittings and wrought iron vertical tension rods. It is likely that this truss dates from the 1860 reconstruction since it was a popular truss form of the period and also because several Ellet-inspired suspension bridges in West Virginia built in the 1850s employed similar trusses. In any case, these trusses can hardly be any later than the strengthening of the bridge which was undertaken in 1971-2.

The auxiliary stay cables were added at the time of the 1871-2 strengthening and followed a design by Washington Roebling. This effectively “roeblingized” the bridge’s appearance although the main cables and vertical suspenders were left unaltered. Washington Roebling and Wilhelm Hildenbrand, who undertook the strengthening project, also widened the distance between the cables and placed the walkways inside the stringers. This resulted in an improved lateral stiffness. 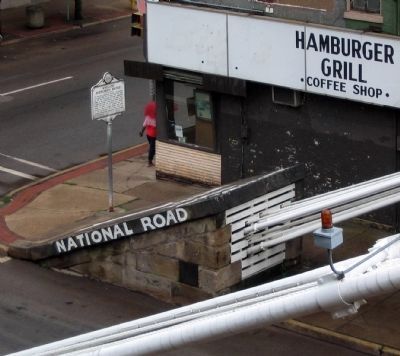 Photographed By Allen C. Browne, August 31, 2005
4. Wheeling Suspension Bridge Marker
1930, and 1948 were largely superseded by a complete rebuilding of the deck in 1956. At that time, the roadway was widened from 16'3" to 20', while the sidewalks were correspondingly narrowed. The entire deck was constructed of steel with an open steel grating for both the walkway and the roadway. This grating rests on steel floor beams that were chosen in order to reduce the dead load and lessen wind resistance.

In spite of these changes, the bridge’s present condition greatly resembled that described by the Wheeling City directory in 1851:

“The span is 1010 feet from the summit of the tower, leaving the entire width of the river unobstructed. The summits of the towers on the eastern, or Wheeling shore are 153½ feet above low water level on the river. Their actual height from the base of the stone work is 82 feet; abutment 22 feet, towers 60 feet. The western towers, on Zane’s Island, are 132¾ feet; the abutment is 63 feet, and the columns of the towers are 69¾ feet. The summits of the eastern towers are 21¾ feet above the western towers.

“The flooring is supported by twelve iron cables suspended from the towers, 10 large and 2 small ones. The large 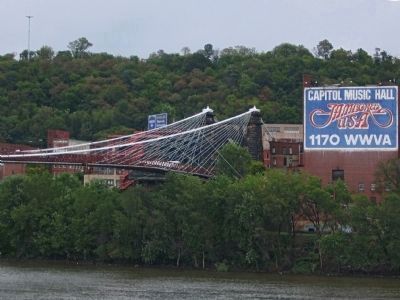 Photographed By Allen C. Browne, August 31, 2005
5. Wheeling Suspension Bridge
And the Capitol Music Hall
ones contain 550 strands of number 10 wire, and the small ones 140 strands. The cables are anchored by a succession of links, like those on a huge chain, into massive walls of masonry built under Main Street in Wheeling. Those at the west end are anchored in like manner in the wing walls extending along the abutment of on Zane’s Island.

“The cables are 1380 feet long from fastening to fastening. Their deflection below the top of the eastern tower is 68½ feet at a temperature of 44 degrees. The flooring is attached to the cables by wire stays ¾ of an inch in diameter, (i.e. vertical suspender rods ¾" diameter) varying in length as they approach and recede from the towers.

“The highest elevation of the flooring is immediately over the channel of the river, 212 feet from the Wheeling shore, where the top of the flooring is a fraction over 93 feet above low water. The height from low water to the bottom of the flooring i.e. the lowest projecting timer, is 91½ feet, leaving that space, subject to the fluctuations of the depth of the channel, for the passage of steamboats and other vessels beneath.

“The flooring ascends from the Wheeling side for 172½ 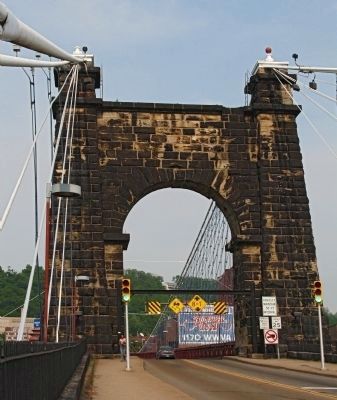 “The strength of the bridge, as computed by Mr. Ellet, is sufficient to resist 297 tons, or 32 heavily laden road wagons. 192 horses and 500 people, a weight equal to an army of 4000 men—a greater probably weight than it will ever be required to sustain. “

Statement of Significance
It can be argued that the Wheeling Suspension Bridge is the nation's most significant extant antebellum engineering structure and that America’s preeminent position as a leader in the design and construction of long suspension bridges began with its successful completion. At the time of building and for many years thereafter, it was the longest suspension in the world. It was the first bridge to be built across the Ohio River, one of the world’s longest navigable streams, and provided a vital link in the National Road. 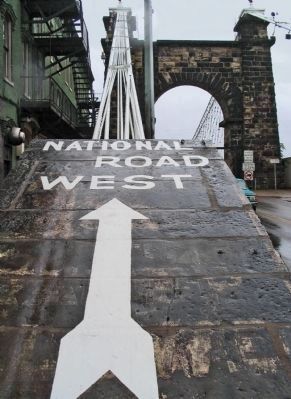 Photographed By Allen C. Browne, August 31, 2005
7. National Road West
Sign on the eastern end of the Wheeling Suspension Bridge
It is the oldest major long span suspension bridge in the world with a span of more 1000 feet, and is probably the oldest important bridge in the New World.

As a result of recent research, Charles Ellet, Jr., is emerging from obscurity and is being recognized as the father of the modern American suspension bridge and an engineer of true genius who was instrumental in proposing internal improvements in transportation, water resources, and flood control for the entire Mississippi-Ohio river system. In addition Colonel Ellet was chiefly responsible for the defeat of the Confederate Naval Forces at the Civil War battle of Memphis as a result of his construction and command of the ram fleet. A wound received during the battle was fatal and cut short his brilliant career. The Wheeling Suspension Bridge stands as a fitting tribute to him.

As early as 1816 a charter was granted to the Wheeling and Belmont Bridge Company for the erection of a bridge at Wheeling, probably in anticipation of the arrival of the Cumberland Pike in 1818. Various factors combined to delay the building of this bridge, but in 1836 Ellet was in communication with Henry Moore of Wheeling 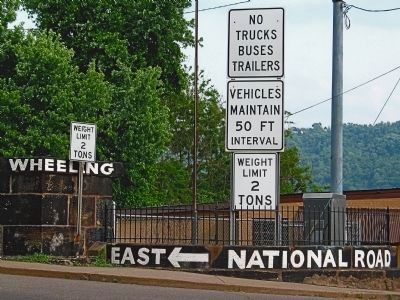 Photographed By Allen C. Browne, May 27, 2007
8. National Road East
Sign on the western end of the Wheeling Suspension Bridge
on the subject and submitted to him a sketch of a possible bridge across the Ohio. There was a further delay, but on March 19, 1848, a new bridge charter was obtained and a new board of directors elected.

In May 1847, the directors sent invitations to both Ellet and John Roebling to present plans and cost estimates for a bridge across the east channel of the river to Wheeling Island. Their selection of these bidders indicates that they had already been influenced in favor of a suspension type of structure, doubtless for two reasons: the substantial savings in cost and freedom from pillars that could obstruct river traffic. Besides influencing the design, the directors also determined the height of the bridge—90 feet above the river. The directors have sometimes been accused of gullibility in their handling of the engineering problems of the bridge, but to their credit it must be said that they were progressive enough and shrewd enough to choose the best of the four generic types of bridges (suspension, arch, cantilever, and truss) for their purpose. They should also be commended for offering the job to one of the two men in America capable of building a span of that size. 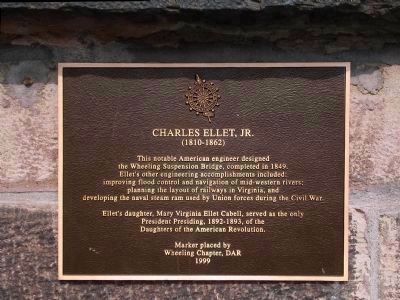 This notable American engineer designed the Wheeling Suspension Bridge, completed in 1849. Ellet’s other engineering accomplishments included: improving flood control and navigation of mid-western rivers; planning the layout of railways in Virginia, and developing the naval steam ram used by Union forces during the Civil War. Ellet’s daughter, Mary Virginia Ellet Cabell, served as the only President Presiding, 1892 – 1893, of the Daughters of the American Revolution.


Ellet was awarded the contract and began construction in 1847. The bridge was completed in November 1849 amid great public acclaim. While it was a thing of considerable grace and beauty, it was not sufficiently stiffened to resist the cumulative motions resulting from the buffeting of high winds. On May 17, 1854, the structure was subjected to torsional movements and vertical undulations that tossed the flooring almost to the height of the towers. Except for some of the cables, the entire structure collapsed into the river. The bridge company, as indicated by its minutes and by newspaper accounts, summoned Ellet (not John Roebling, as an early biography has it) to rebuild the bridge temporarily and draw up a long-range plan for its reconstruction. Timidly, the directors suggested that Ellet might want to place a pier in the middle of the river. He did not follow their suggestion, but, with the help of Captain William K. McComas, superintendent, had a 14' wide version of the bridge functioning again on a one-way traffic basis within three months. This span was used until the summer of 1859 when McComas, now engineer as well as superintendent, rebuilt the bridge at a cost 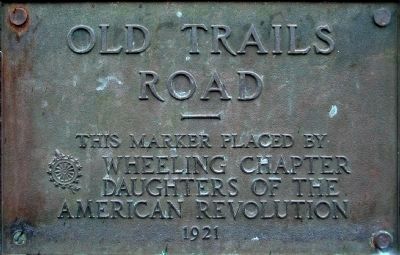 Photographed By Allen C. Browne, August 31, 2005
10. Old Trails Road Marker
on the bridge
Old Trails
Road
--
This marker placed by
Wheeling Chapter
Daughters of the American Revolution
1921
of between $35,000 and $40,000. There are indications that he incorporated Roebling principles into his revision. (He spent $50 on a trip to Niagara Falls to study John Roebling’s bridge across the gorge.)

In a 1933 history of the bridge, T.R. Lawson, dean of RPI, states that McComas increased the number of wires of the bridge by a third, but reduced the number of cables from 12 to 4 (which were approximately 7¼" in diameter and were wrapped with No. 14 wire). During this 1859 rebuilding, McComas also added guy wires above and below the bridge on both river banks and placed wind guys at points along the platform. However, he placed the walks in an awkward position outside the suspenders. He was able to open his version of the bridge to traffic on a limited basis on July 20, 1860, and to all traffic on August 1, 1860.

A direct Roebling touch came in 1871 and 1872. Under a plan drawn up by Washington Roebling, Wilhelm Hildenbrand, engineer for the Roebling Company, and Joseph Lawson, superintendent, moved the cables farther apart and placed the sidewalks inside the suspenders. They also added a system of wire stays invented by Roebling. In 1886, Hildenbrand again 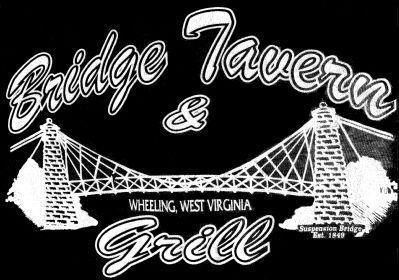 Photographed By Allen C. Browne
11. Tee Shirt
Tee Shirt from the nearby Bridge Tavern at 10th & Main
went to work on the bridge, improving the flooring system in particular. Several more improvements have been made to the bridge, the last being an overhaul in [illegible year]. Engineers predict a happy future for the bridge. (Submitted on April 13, 2013, by Allen C. Browne of Silver Spring, Maryland.) 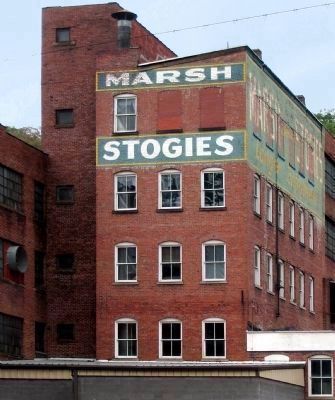