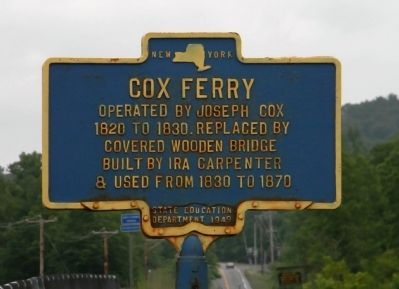 By Paul Crumlish, June 26, 2011
1. Cox Ferry Marker
Inscription.
Cox Ferry. . Operated by Joseph Cox 1820 to 1830. Replaced by wooden covered bridge built by Ira Carpenter and used from 1830 to 1870 . This historical marker was erected in 1949 by New York State Education Department. It is in Scottsville in Monroe County New York

Topics. This historical marker is listed in these topic lists: Bridges & Viaducts • Roads & Vehicles • Waterways & Vessels. A significant historical year for this entry is 1820. 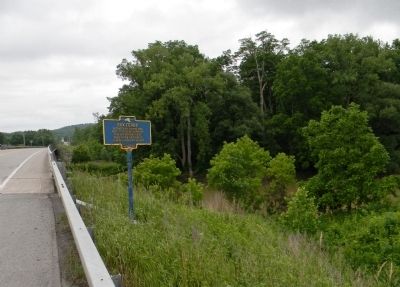 Click or scan to see
this page online
(approx. 1.4 miles away); Site of First Quaker Meeting House (approx. 1½ miles away). Touch for a list and map of all markers in Scottsville.

Regarding Cox Ferry. According to the Wheatland, Monroe County, New York: a brief sketch of its history, the Cox Ferry was approximately one mile downstream on the Genesee River, near Allan's Creek, from the location of the marker. The wooden covered bridge did cross the river at this location.