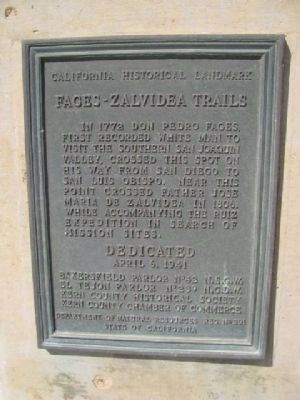 In 1772, Don Pedro Fages, first recorded non-Indian to visit the southern San Joaquin Valley, crossed this spot on his way from San Diego to San Luis Obispo. Near this point crossed Father José María de Zalvidea in 1806, while accompanying the Ruiz expedition in search of mission sites.

Topics and series. This historical marker is listed in these topic lists: Colonial Era • Exploration • Hispanic Americans • Settlements & Settlers. In addition, it is included in the California Historical Landmarks, and the Native Sons/Daughters of the Golden West series lists. A significant historical year for this entry is 1772. 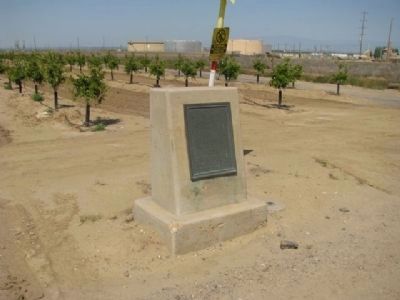 Photographed By Denise Boose, April 6, 2012
2. Fages-Zalvidea Trails Marker
With the water tanks in the background.

Click or scan to see
this page online
Mettler on Highway 166. Once you pass over Interstate 5, It is just to the left of some water tanks and in front of a young orchard. Touch for map. Marker is in this post office area: Bakersfield CA 93313, United States of America. Touch for directions.