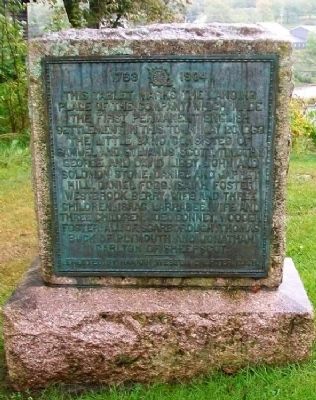 This tablet marks the landing place of the company which made the first permanent English settlement in this town, May 20, 1763. The little band consisted of Samuel and Sylvanus Scott, Timothy George, and David Libby, John and Solomon Stone, Daniel and Japhet Hill, Daniel Fogg, Isaiah Foster, Westbrook Berry, wife and three children, Isaac Larrabee, wife and three children, Joel Bonney, Wooden Foster, all of Scarborough, Thomas Buck of Plymouth and Jonathan Carlton of Sheepscot.

Topics and series. This historical marker is listed in these topic lists: Colonial Era • Settlements & Settlers • Waterways & Vessels. In addition, it is included in the Daughters of the American Revolution (DAR) series list. A significant historical month for this entry is May 2005. 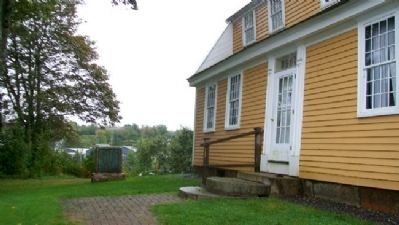 Click or scan to see
this page online
the grounds of the Burnham Tavern Museum. Touch for map. Marker is in this post office area: Machias ME 04654, United States of America. Touch for directions.