The 71st Regiment of Foot 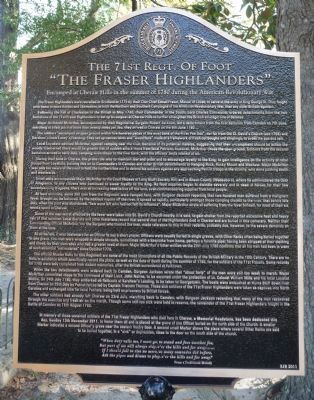 Encamped at Cheraw Hills in the summer of 1780 during the American Revolutionary War.

The Fraser Highlanders were recruited in Scotland in 1775 by their Clan Chief Simon Fraser, Master of Lovat, to serve in the army of King George III. They fought with honor in more Battles and Skirmishes, in both the Northern and Southern Campaigns of the American Revolutionary War, than any other British regiment.

Following the Fall of Charleston to the British in May 1780, their Commander in the South, Lord Charles Cornwallis, ordered detachments from the two Battalions of the 71st Fraser Highlanders to set up an outpost at Cheraw Hills to further strengthen the British strategic line of defense.

Major Archibald McArthur, accompanied by their Regimental Surgeon Robert Jackson, led a detachment from the first Battalion from Camden on 7th June, marching at a fast pace of 20 miles per day, they arrived in Cheraw on the 9th June 1780.

The soldiers camped “within 400 to 500 paces” from what was Kershaw’s (now Laney’s) Landing on the west bank of the Great Pee Dee River, on open land not far from Old St. 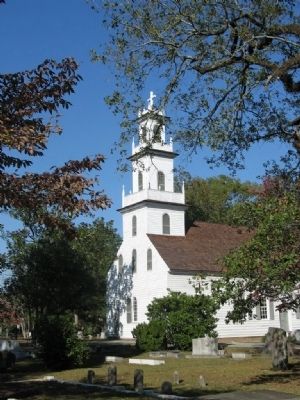 Click or scan to see
this page online
David’s Church (est.1768). They set up canvas tents and “wood huts” made of a framework of fresh cut boughs and striplings, to help avoid the sun and rain.

Local Loyalists advised McArthur against camping near the river, because of its potential malaise, suggesting that their encampment should be within the woods. Concerned there would be greater risk of sudden attack there from local Patriots, however, McArthur chose the open ground. Soldiers from the second battalion arrived in early July, camping, even closer to the river bank; with the officers tents nearest of all.

During their time in Cheraw, the prime role was to maintain law and order and to encourage loyalty to the King; to gain intelligence on the activity of rebel troops from Loyalists, passing this on to Commanders in Camden and other British detachments at Hanging Rock, Rocky Mount and Waxhaw. Major McArthur was only too aware of the need to hold the northern line; and to defend his soldiers against any approaching Patriot troops in the vicinity, who were pushing south and westwards.

Small units accompanied Major McArthur to the Court Houses at Long Bluff (Society Hill) and Anson County (Wadesboro), where he administered the Oath of Allegiance, to any citizens who continued to swear loyalty to the King. As food supplies began to dwindle severely and in need of horses for 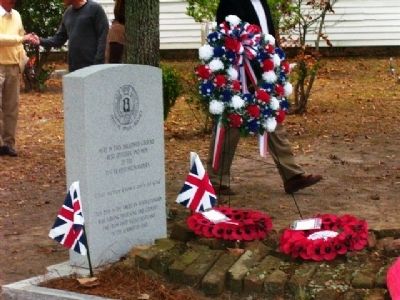 Photographed By Stephanie Joan Briggs, circa November 13, 2011
3. Officer's Headstone
their few accompanying dragoons, there was an increasing need to live off the land, even commandeering supplies from local people.

At best estimate, some 300 men from the Regiment were camped here, with Surgeon Jackson reporting that two hundred men suffered from a malignant fever, brought on, he believed, by the noxious vapors off the river. It spread so rapidly, particularly amongst those camping closest to the river, that before late July, when the post was abandoned, “few were left who had not felt its influence”. Major McArthur wrote of suffering from the fever himself, for most of their six weeks spent in Cheraw.

Some of the men worst affected by the fever were taken into St David’s Church nearby, it is said, to gain shelter from the reported excessive heat and heavy rain of that summer. Local diarists and other historians record that several men of the Highlanders died in Cheraw and are buried in this cemetery. Neither their Commanding Officer McArthur, nor the Surgeon who treated the men, made reference to this in their records, probably due, however, to the severe demands on them at the time.

At burials in the field, it was customary for an Officer to say a short prayer, with Officers mostly being buried separately and Other Ranks being buried together. They were usually wrapped in simple shrouds, sometimes with a keepsake from home, perhaps a favorite pipe, having been stripped of their clothing and shoes, by their surviving comrades who had a greater need of them. Major McArthur’s letter written on the 29th July 1780 confirms that all his men had been in want of such essential “necessaries” since October 1778.

The official Muster Rolls for this Regiment are some of the most incomplete of the British Military in the 18th Century. There are no Rolls in existence for the soldiers of the 71st Frasers which specifically record the place and date of death, during the summer of 1780. Some records for 1780 were only completed from distant memories, after the British surrendered at Yorktown.

When the two detachments were ordered back to Camden, Surgeon Jackson wrote that “about forty” of the men were still too weak to march. Major McArthur committed these to the command of their Liuetenant John Nairne, to be escorted under the protection of Lt. Colonel William Mills and his local Loyalist Militia. On 24th July 1780, they embarked on flatboats at Kershaw’s Landing, to be taken to Georgetown. The boats were ambushed at Hunts Bluff down river from Cheraw on 25th July by Patriot forces led by Captain Tristram Thomas. These sick soldiers of the 71st Fraser Highlanders were taken as captives into North Carolina and exchanged later for local Patriots being held as prisoners by British forces.

The other soldiers, meanwhile, had marched back to Camden, with Surgeon Jackson recording that many of the men recovered through the exercise and fresh air on the march. Though some still too sick were held in reserve, the remainder of the 71st Fraser Highlanders fought in the Battle of Camden on 16th August 1780.

In memory of those unnamed soldiers of the 71st Fraser Highlanders who died here in Cheraw, a Memorial Headstone, has been dedicated this day, Sunday 13th November 2011, to honor them all and is placed at the grave of one Officer buried on the north side of the church.

Another Officer is believed to be buried near the eastern Vestry door, with several Other Ranks being buried together, in a “sink or depression “close to the door on the south side of the church. These two grave sites are each identified by a small Marker.

Erected 2011 by The Civic League of Cheraw.

Topics. This historical marker is listed in these topic lists: Cemeteries & Burial Sites • Colonial Era • Military • War, US Revolutionary. A significant historical month for this entry is May 1780.

Location. 34° 41.766′ N, 79° 52.782′ W. Marker is in Cheraw, South Carolina, in Chesterfield County. Marker is at the intersection of Church Street and Front Street, on the left when traveling west on Church Street. The Marker is to the left just inside the iron fence of Old St David's Episcopal Churchyard and to the left of the minor road for cars inside the iron fence; but within feet of a State Marker outside the fence identifying Old St David's Episcopal Church itself. Touch for map. Marker is in this post office area: Cheraw SC 29520, United States of America. Touch for directions.

Other nearby markers. At least 8 other markers are within 2 miles of this marker, measured as the crow flies. Old St. David's (here, next to this marker); Francis Asbury's First Visit to S.C. (within shouting distance of this marker); Captain Mose Rogers (within shouting distance of this marker); Cheraw Confederate Memorial (about 400 feet away, measured in a direct line); Pee Dee Union Baptist Church (about 500 feet away); Coulter Memorial Academy Site (approx. half a mile away); Dizzy Gillespie Birthplace (approx. ¾ mile away); Greene's Encampment / Sherman's March (approx. 2 miles away). Touch for a list and map of all markers in Cheraw.