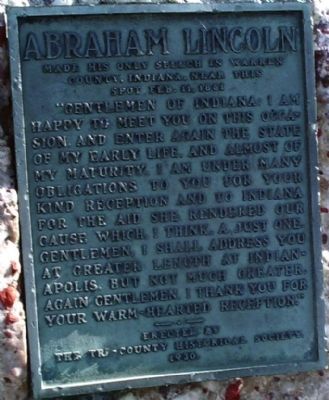 By Al Wolf, October 28, 2007
1. Abraham Lincoln made his only speech in Warren County, Indiana..... Marker
Lincoln's 1st Stop in Indiana on way to be President.
Inscription.
Abraham Lincoln. .
Abraham Lincoln made his only speech in Warren County, Indiana near this spot Feb. 11, 1861.. “Gentlemen of Indiana: I am happy to meet you on this occasion, and enter again the state of my early life, and almost of maturity. I am under many obligations to you for your kind reception, and to Indiana for the aid she rendered our cause which, I think, a just one. Gentlemen, I shall address you at greater length at Indianapolis, but not much greater. Again gentlemen, I thank you for your warm hearted reception.” . This historical marker was erected in 1930 by Tri-County Historical Society (Warren County Historical Society). It is in State Line City in Warren County Indiana

Abraham Lincoln made his only speech in Warren
County, Indiana near this
spot Feb. 11, 1861.
“Gentlemen of Indiana: I am happy to meet you on this occasion, and enter again the state of my early life, and almost of maturity. I am under many obligations to you for your kind reception, and to Indiana for the aid she rendered our cause which, I think, a just one. Gentlemen, I shall address you at greater length at Indianapolis, but not much greater. Again gentlemen, I thank you for your warm hearted reception.”

Topics and series. This historical marker is listed in these topic lists: Civil Rights • Notable Events • Railroads & Streetcars • War, US Civil. In addition, it is included in the Former U.S. Presidents: #16 Abraham Lincoln, and the Lincoln 1861 Inaugural Train Stops series lists. A significant historical month for this entry is February 1862. 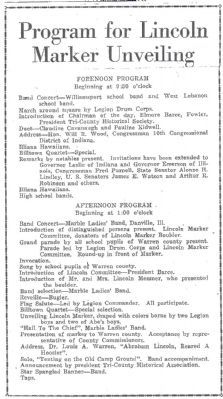 By Al Wolf, September 18, 1930
2. Program for Lincoln Marker Unveiling - - 1930
The above is from the Williamsport, Indiana "Republican Review" newspaper dated 9-18-1930 for the "Unveiling" on the following Sunday at State Line City, Indiana.

Click or scan to see
this page online
City, Indiana, in Warren County. Marker is at the intersection of East Woodard Street and Main Street, on the right when traveling east on East Woodard Street. In the town Park of State Line City, Indiana (which is commonly called State Line, Indiana) Can be seen from Town Post Office. Touch for map. Marker is in this post office area: State Line IN 47982, United States of America. Touch for directions. 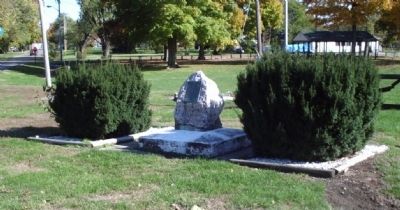 Arriving at State Line at 12:38 P.M., they had lunch (at $1.00 per person—considered outrageously high by some news reporters of the day.) Lunch was served at the three story frame hotel just North of the tracks. It was called the “Frazier Eating House” or “The State Line Hotel.”

After all the luggage and articles were transferred to the “Wabash Railroad” train, Lincoln gave the short speech recorded on this marker. With a ring of the locomotive’s bell, they departed at approximately 1:30 P.M.

There were a total of ten stops made in the State of Indiana during Lincoln’s trip to be sworn in as President. He stayed overnight in Indianapolis on the 11th and woke up to his birthday (12th) prior to heading to Cincinnati, Ohio.

The entire journey Lincoln traveled from Springfield, Illinois to Washington, D. C. was 1,904 miles long using18 railroad companies and needed over 24 steam locomotives traveling at break–neck speed of 30 MPH. There were other places on his trip that had 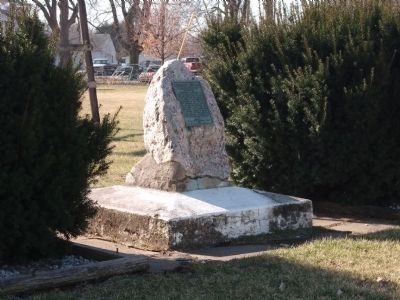 By Al Wolf, March 15, 2009
4. New View (2009) of - Abraham Lincoln Marker
Yet in excellent condition the marker is photographed from a different view.
track gauge changes. Always proceeding the “Presidential Special Train” was a pilot locomotive checking the way for problems and security.

Since dinning cars were not invented yet, travelers had to take along their own food and drink unless there were planned “eating Stops.” Of the five “planned” eating stops for Lincoln’s train, one of them had no food left due to the large crowd that gathered waiting for him. Due to necessary security Lincoln’s food was guarded and kept safe without the public’s knowledge. Note To Editor only visible by Contributor and editor
— Submitted February 18, 2008.
2. Fist Fights in State Line City::
(From the Danville, Illinois Library: The Heritage of Vermilion County (Illinois), Vols. 2-3, Autumn 1966, Page 16, article entitled Warren County, Indiana by Rev. Grover Williams, Jr.)

The following is an exact quote:
“At any rate, what does appear certain is that not all State Line City was happy to see Lincoln. Some “Warren County Rebels” were there, among them Elijah Miller, and they greeted Lincoln, not with “Hail To The Chief” but with “Three Cheers For Jefferson Davis.” Some fist fights 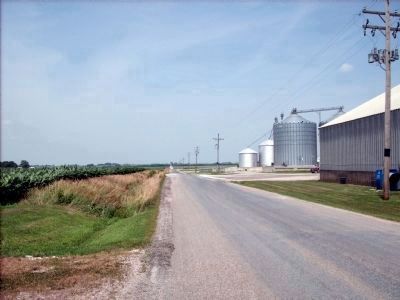 By Al Wolf, July 2, 2008
5. Looking North - - - Road Between the States !
Illinois is on the Left (West) - and - Indiana is on the Right (East.) It travels many miles between Illinois and Indiana. Depending which way your are driving the center of the road puts you in one of the two States. The grain elevator on the Right does the same type trade as when Lincoln came through in 1861. It is yet needed for the farmers in the area to ship out grain to big city markets.
started and it seemed for a time the Civil War might erupt right in State Line. Order, however, prevailed and Lincoln ate his meal, then journeyed on to meet his date with destiny. Bluff old Elijah Miller sleeps with his family in the old Gopher Hill graveyard, along with many of his neighbors who “wore the blue”, their enmity also long since laid to rest; but at least one resident of Warren County still bears the proud name of Jefferson Davis.”
— Submitted February 2, 2009, by Al Wolf of Veedersburg, Indiana.
3. Eight (8) year old boy - - rode in Lincoln's lap (State Line City to Williamsport, Indiana)::
((From an article, submitted by Gene Strickler, titled “Lincoln’s Special” in the “Backward Glances” magazine, Mary Ann Publishers, Inc., Williamsport, Indiana (January 1990 edition - Page 5 ))

“”The Lincoln Special made a brief stop at Williamsport where a huge throng awaited, Mr. Lincoln made a rear-platform appearance, waved and smiled at the crowd, but made no speech there. The Special then preceded to Lafayette and Indianapolis. 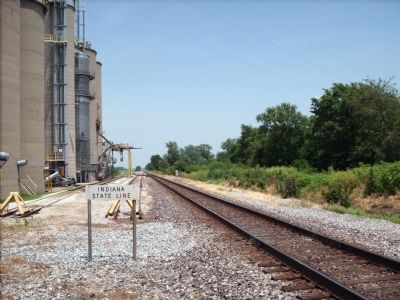 By Al Wolf, July 2, 2008
6. Abraham Lincoln traveled this Railroad Line.
Standing in Illinois to take this photo: It is looking East (into Indiana) at the tracks headed to Lafayette, Indiana. (Click on photo to see more.) Just beyond the grain bins to the left are some other sidings that seem to be near where the old "State Line Depot/Hotel/Eating Place" was (Left of the tracks) that Lincoln stopped at in 1861 to change trains and have a lunch.
lap during the journey from State Line to Williamsport. The story appeared in the Omaha, Nebraska World Herald fifty years later. It is as follows:

Precisely half a century ago, a very diminutive boy was lifted to his knees and cuddled up in the arms of Abraham Lincoln and there lay pressed close to the big heart of the president-elect for an hour during the first stage of that memorable journey to Washington for inauguration. This early privileged 8 year old boy was W. H. Kent who came to Omaha in 1876 and is now proof-reader on the World Herald. ...

... The explanation of my being on the special at all is very simple, says Mr. Kent. ... ... I was on the train because William Kent Sr. My father, was a director of the Toledo, Wabash and Western (railroad), which had its termination at State Line City, Ind., seven miles east of Danville, Ill., where it met the Atlantic & Great Western, ... ... The special was dead-headed to State Line City, my father went with it officially, and took me with him.”“
— Submitted September 28, 2012, by Al Wolf of Veedersburg, Indiana. 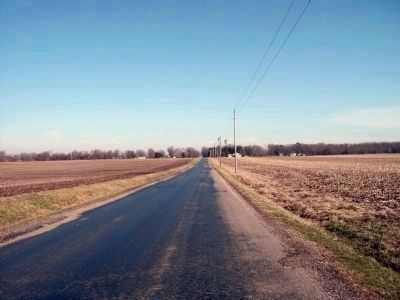 By Al Wolf, March 15, 2009
7. State Line City - Straight Ahead (to the North) !
Just ahead is State Line City. Indiana is on the right side of the road - while Illinois is on the left side. There is a continual "Time Rift" between the two! Indiana is ahead of Illinois by one hour due to "Day Light Savings Time." 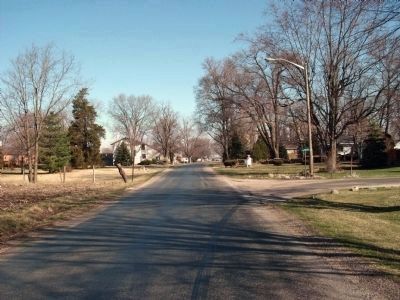 By Al Wolf, March 15, 2009
8. Just entering State Line City !
The Indiana homes on the right live one hour ahead of their neighbors across the street in Illinois. The street on the right is called "South Street". 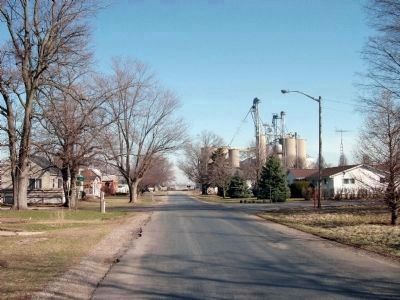 By Al Wolf, March 15, 2009
9. Across the street - the "Time Rift"
In the 'old days' of Indiana Time, your neighbor across the street was on the same time during the Summer. Now in State Line City - "Day Light Savings Time" keep them in the 'time rift' of a one hour difference between Illinois and Indiana. 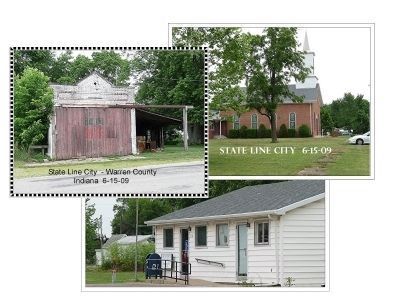 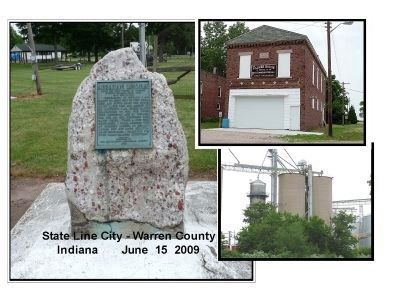