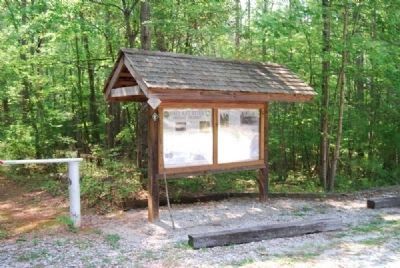 Pacolet River Heritage Preserve, owned and managed by the S.C. Department of Natural Resources, covers 278 acres in Spartanburg County, SC. Come to bird-watch, take photographs, fish or simply enjoy the woods and Pacolet River. Leave with a sense of awe sparked by visiting a site important to people thousands of years ago. As you sit watching the river, imagine the lives of the Native Americans who stopped here on their seasonal migrations between the coast and the uplands of the state.

What to look for...
The preserve protects two Native American soapstone quarries. Early residents of the state came here between 3000 and 1100 B.C. to obtain material to make bowls, pipes, and other necessities. The soapstone outcrops are fragile and should not be touched.

Two uncommon plant species, a moss and a leafy liver wort are also protected within the preserve. Less rare, but no less interesting, are the summer pine/hardwoods along the Pacolet River. In summertime, the forest shelters wood thrushes, red-eyed vireos, Eastern wood pewees and yellow-billed cuckoos, along with more commonly-seen songbirds. Reptiles and 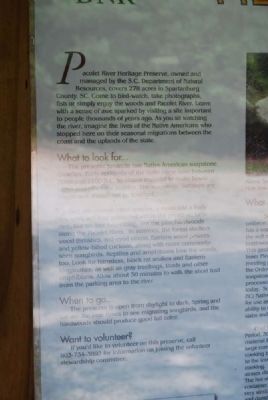 Click or scan to see
this page online
amphibians love the woods, too. Look for harmless, black rat snakes and Eastern kingsnakes, as well as gray treefrogs, toads and other amphibians. Allow about 30 minutes to walk the short trail from the parking area to the river.

When to go...
The preserve is open from daylight to dark. Spring and fall are the best times to see migrating songbirds, and the hardwoods should produce good fall color.

What is Soapstone?
Soapstone is a metamorphic rock found along the collision zones of tectonic plates. To the touch this sock has a soapy or oily feel because its major component is the soft mineral talc. Outcrops of soapstone occur along northwestern margins of the King's Mountain Shear Zone. This geological one marks the boundary between the Inner Piedmont Belt and the Carolina Slate Belt and the meeting place of two ancient continents. Created during the Ordovician period (490 to 443 million years ago) these soapstone outcrops are reminders of powerful geologic processes that produced the South Carolina that we know today. Sometime during the Archaic Period (8,000 - 3,000 BC) Native American people started quarrying this material for use as hunting tools, jewelry and because of its superior ability to with stand thermal shock it was turned into cooking slabs and bowls.

Prior to the development of pottery in the Late Archaic Period, 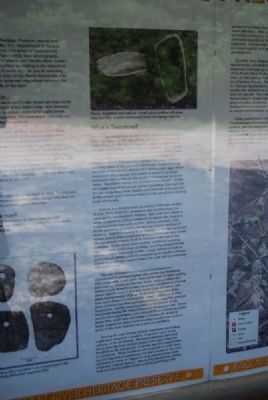 Photographed By Brian Scott, July 11, 2011
3. Pacolet River Heritage Preserve Marker
4,000 - 3,000 BC, soapstone was an important raw material for Southeastern Indians. Raw nuts and tubers, a large component of the prehistoric forager's diet, required cooking before they were edible. Archaic peoples, prior to the invention of pottery, devised an indirect method of cooking. Indirect cooking is accomplished by placing heated stones directly into containers holding water and other foods. The hot stones transfer heat to the food while inside the container. Earth ovens were another method of cooking, very similar to dutch over cooking, involving heating stones and dampened vegetable matter. Large pieces of meat or quantities of tubers could be wrapped up in bundles of large leaves then laid over heated stones in a pit, and covered over with soil to cook.

The use of heated rocks to cook food has been documented in archaeological sites across the Southeast. After a few uses most rocks disintegrate due to rapid heating and cooling, known as thermal shock, leaving behind fire cracked rock. Soapstone has a superior resistance to thermal shock, and because it is a soft stone it can be carved into easily transportable objects. Perforated soapstone discs have been found throughout the coastal plain and in other parts of South Carolina well away from the material's geologic occurrence. Mobility was important to the people of the Southeast during the Paleoindian and 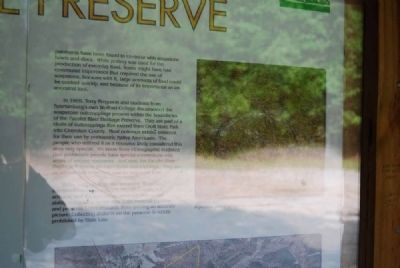 Photographed By Brian Scott, July 11, 2011
4. Pacolet River Heritage Preserve Marker
Archaic periods. These people were dependent upon their ability to relocate to areas where they could take advantage of seasonally available foods, soapstone slabs made cooking unpalatable foods in areas of that state that are stone poor a possibility.

During the Late Archaic Period, soapstone technology might have assumed a position of greater value to the cultures of the Southeast. Worked soapstone discs and bowls from the Late Archaic Period have been found as far afield as the panhandle of Florida and the coastal plain of Louisiana. These locations are hundreds of miles from natural deposits of soapstone and their presence has been attributed to trade or migration of groups between these areas and upland regions. Also during this period, pottery took over as the predominant cooking technology and potsherds have been found to co-occur with soapstone bowls and discs. While pottery was used for the production of everyday food, feasts might have had communal importance that required the use of soapstone, because with it, large amounts of food could be cooked quickly, and because of its importance as an ancestral tool.

In 1969, Terry Ferguson and students from Spartanburg's own Wofford College documented the soapstone outcroppings present within the boundaries of the Pacolet River Heritage Preserve. They are part of a chain of outcroppings that extend from 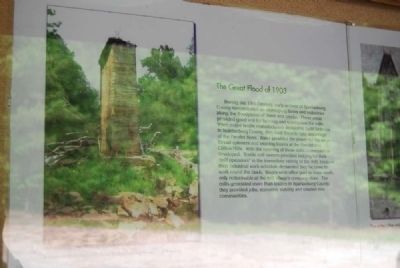 Today, artifacts from this area help fill in out interpretations of prehistoric times. Disturbing the artifacts, and the soapstone outcrops, harms our ability to learn bout the past from material remains and prevents future research from gaining an accurate picture. Collecting artifacts on the preserve site is strictly prohibited by State Law.

The Great Flood of 1903
During the 19th Century, early settlers of Spartanburg County concentrated on developing farms and industries along the floodplains of rivers and creeks. These areas provided good soil for farming and waterpower for mills. When major textile manufacturing decided to take advantage of the Pacolet River. Water provided the power for the large thread spinners and weaving looms at the Pacolet and Clifton 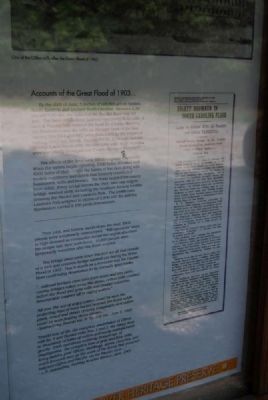 Photographed By Brian Scott, July 11, 2011
6. Pacolet River Heritage Preserve Marker
Mills. With the opening of these mills, communities developed. Textile mill owners provided lodging for their "mill operators" in the immediate vicinity of the mill, because their industrial work schedule demanded they be close to work around the clock. Wages were often paid in store credit, only redeemable at the mill village's company store. The mills generated more than textiles in Spartanburg County, they provided jobs, economic stability and created new communities.

Accounts of the Great Flood of 1903...
By the sixth of June, 5 inches of rain fell across Upstate South Carolina and western North Carolina. Between 5:30 am and 6:30 am, the waters of the Pacolet River rose 40 feet. The force of this flood battered everything in its path. A dam at Pacolet Mills resisted the flood for a while, diverting the floodwaters into the mills on the west bank of the river. Pacolet Mills No. 1 and No. 2 were devastated by the impact of rushing water and debris. Pacolet Mill No. 3, though severely.

The effects of the flood were felt throughout the county. When the waters began receding, 3,500 bales of cotton and 4,500 bales of cloth dotted the banks of the river along with broken machinery and debris that formed constituted businesses, mills and homes. The flood isolated the county from relief. Every bridge across the river, save one wagon bridge washed away, 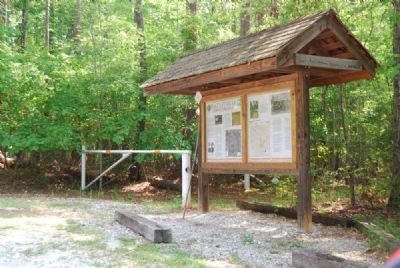 Photographed By Brian Scott, July 11, 2011
7. Pacolet River Heritage Preserve Marker
including the Southern Railway trestles crossing the Pacolet and Lawson's Fork. The trestle over Lawson's Fork weighed in excess of 2,500,000 lbs and the flood waters carried it 150 yards downstream.

The bridge abutments down this trail are all that remain of a rock and concrete bridge washed out during the Great Flood of 1903. Now it stands as a reminder that the Pacolet River could being devastation to its normally quiet banks.

"...railroad bridges were torn from stone and iron piers, county bridges rolled away like straw, cotton mills crashed before the flood and grist mills and smaller industries innumerable washed off in raging waters.

"All over the sea of angry waters could be seen the projected tops of trees buried beneath the flood, while plank, wood and debris of every imaginable description could be seen floating down stream..."
-- Spartanburg Journal, Vol. III No. 234 Sat., June 6, 1903.

"Untold loss of life, the complete annihilation of Clifton Mill No. 3 and Pacolet Mills Nos. 1 and 2, the injury done to thousands of bales of cotton 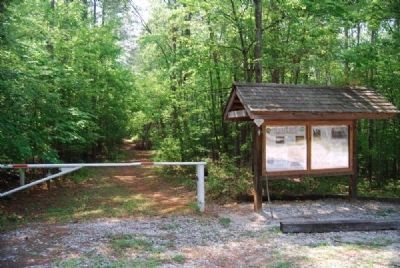 Topics. This historical marker is listed in these topic lists: Animals • Disasters • Native Americans • Waterways & Vessels. A significant historical month for this entry is June 1830.

Location. 34° 55.767′ N, 81° 46.85′ W. Marker is in Pacolet, South Carolina, in Spartanburg County. Marker is on Lucky Lane. Marker is located at the headway of the trail to the Pacolet River. Touch for map. Marker is in this post office area: Pacolet SC 29372, United States of America. Touch for directions.

2. Slobot About Town XIV: Slobot goes to the Pacolet River Soapstone Quarry. The Pacolet River Heritage Preserve is a 257-acre property run by the Heritage Trust. (Submitted on May 5, 2012, by Brian Scott of Anderson, South Carolina.)

3. Soapstone. Soapstone (also known as steatite or soaprock) is a metamorphic rock, a talc-schist. (Submitted on May 5, 2012, by Brian Scott of Anderson, South Carolina.)

6. Gary Henderson and the 1903 Pacolet River Flood. Henderson, an area journalist, speak about the 1903 flood, the deadliest in South Carolina's history. (Submitted on May 5, 2012, by Brian Scott of Anderson, South Carolina.)