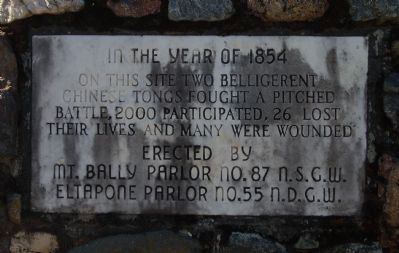 By Barry Swackhamer, June 2, 2012
1. Chinese Tong War Marker
Inscription.
Chinese Tong War. . In the year 1854 on this site two belligerent Chinese Tongs fought a pitched battle, 2000 participated, 26 lost their lives, and many were wounded. . This historical marker was erected by Mt. Bally Parlor No. 87 N.S.G.W,/Eltaphone Parlor No. 55 N.D.G.W.. It is in Weaverville in Trinity County California

In the year 1854 on this site two belligerent Chinese Tongs fought a pitched battle, 2000 participated, 26 lost their lives, and many were wounded.

Topics and series. This historical marker is listed in this topic list: Asian Americans. In addition, it is included in the Chinese Heritage Sites of the American West, and the Native Sons/Daughters of the Golden West series lists. A significant historical year for this entry is 1854.

Location. 40° 44.037′ N, 122° 56.102′ W. Marker is in Weaverville, California, in Trinity County. Marker is on Trinity Lake Boulevard (California Route 3), on the right when traveling east. This marker is next to the road, east of Weaverville Elementary School. Touch for map. Marker is in this post office area: Weaverville CA 96093, United States of America. Touch for directions. 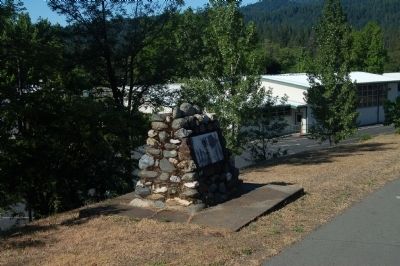 More about this marker. When conflicts among the Chinese arose, the building adjacent to the temple (Joss House) was used as a court room...
The “Court of the Temple” was unable to reconcile two factions in 1854. Each faction ordered John Carr, the local blacksmith, to make several hundred Chinese spears. They drilled and paraded with traditional weapons and regalia for a week prior to the date of battle. The residents of Weaverville and the surrounding areas placed bets on which faction would win.
On the appointed day, spectators and participants alike gathered at Five Cent Gulch east of town for the fight. After ten minutes of battle, it was over. A few men had been killed and both sides claimed victory.
After burying the dead with elaborate funerals, the factions dropped their hostilities and met for a peace banquet.

Also see . . .  The 1854 Tong War, California - Feral Jundi. Basically this was a classic Chinese battle between two mining companies/gangs in Northern California during the Gold Rush. And boy what a battle? Ironically, only four combatants died in the battle that had 2,500 participants! (the monument says 2000 participated and 26 were killed?) (Submitted on June 6, 2012, by Barry Swackhamer of Brentwood, California.) 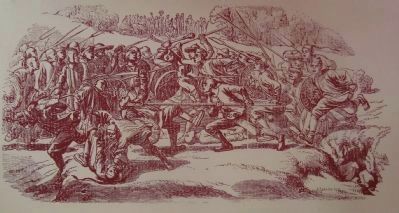