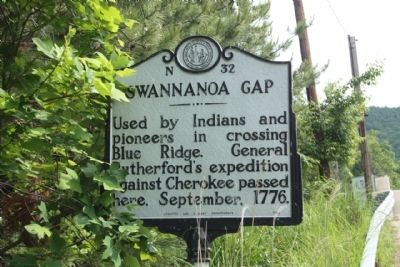 Photographed By Mike Stroud, May 19, 2012
1. Swannanoa Gap Marker
Inscription.
Swannanoa Gap. . Used by Indians and pioneers in crossing Blue Ridge. General Rutherford's expedition against Cherokee passed here, September, 1776. . This historical marker was erected in 1956 by Archives and Highway Departments. It is in Ridgecrest in Buncombe County North Carolina

Topics and series. This historical marker is listed in these topic lists: Native Americans • Natural Features • Roads & Vehicles. In addition, it is included in the North Carolina Division of Archives and History series list. A significant historical month for this entry is September 1776.

Location. 35° 37.216′ N, 82° 16.409′ W. Marker is in Ridgecrest, North Carolina, in Buncombe County. Marker is on Yates Avenue near Kitazuma Road, on the right when traveling south. Touch for map. Marker is in this post office area: Black Mountain NC 28711, United States of America. Touch for directions.

Other nearby markers. At least 8 other markers are within 3 miles of this marker, measured as the crow flies. Swannanoa Tunnel (about 700 feet away, measured in a direct line); Swannanoa Gap Engagement (approx. 0.2 miles away); Stoneman's Raid (approx. 0.3 miles away); Mount Mitchell Railroad (approx. 1½ miles away); George Winslow Whittington 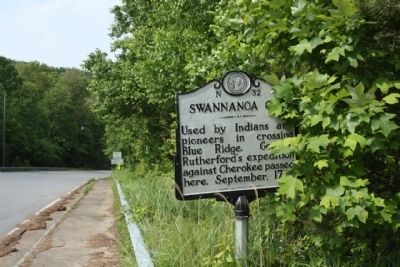 Regarding Swannanoa Gap. Swannanoa Gap sits on the Buncombe-McDowell County line near the head of the Catawba River. In the Blue Ridge Mountains, Swannanoa Gap and Hickory Nut Gap were the primary passes through which early settlers and Indians traveled to reach the Asheville Plateau. With an elevation of 2,657 feet, the plateau is the dividing line between the waters that flow to the Atlantic and those that flow to the Mississippi River and into the Gulf of Mexico.

Swannanoa Gap played a role in conflicts of the Revolutionary and Civil wars. The expedition led by General Griffith Rutherford against the Cherokee passed through the gap in September of 1776. The Cherokee had allied themselves with the British and had attacked white settlers in the western parts of North and South Carolina. To put an end to this Rutherford led a militia of 2,500 men in “scorched earth” warfare. By the end of the expedition, Rutherford and his men had destroyed thirty 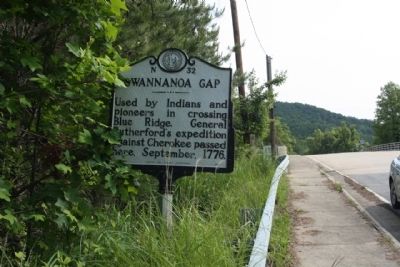 One of the Civil War’s last cavalry raids occurred in April of 1865 at Swannanoa Gap. To protect Asheville from encroaching Federal troops led by Brigadier General Alvan Gillem, Confederate troops were placed in the gap. The confederate blockade of 500 men and four pieces of heavy artillery proved effective. However, Gillem moved his cavalry forty miles south and breached Confederate lines at Howard’s Gap. Confederate General James G. Martin surrendered soon after, but Federal troops still sacked Asheville. The Civil War slowed efforts to connect western North Carolina with the rest of the state. Finally, in 1880, the Western North Carolina Railroad passed through the Swannanoa Gap then up and over Old Fort Mountain, completing the railway. ( North Carolina Dept. of Cultural Resources) 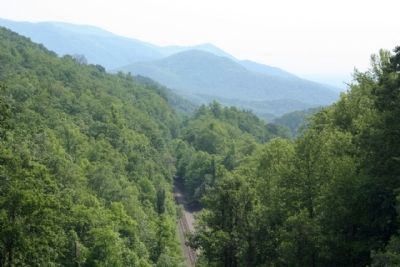