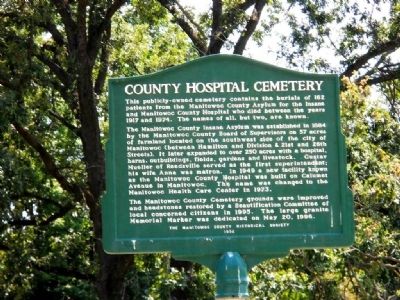 The Manitowoc County Insane Asylum was established in 1884 by the Manitowoc County Board of Supervisors on 57 acres of farmland located on the southwest side of the city of Manitowoc (betwen Hamilton and Division & 21st and 26th Streets). It later expanded to over 250 acres with a hospital, barns, outbuildings, fields, gardens and livestock. Gustav Mueller of Reedsville served as the first superintendent; his wife Anna was matron. In 1949 a new facility known as the Manitowoc County Hospital was built on Calumet Avenue in Manitoweoc. The name was changed to the Manitowoc Health Care Center in 1973.

The Manitowoc County Cemetery grounds were improved and headstones restored by a Beautification Committee of local concerned citizens in 1995. The large granite Memorial Marker was dedicated on May 20, 1996. 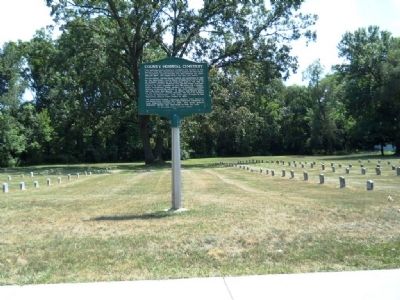 Topics. This historical marker is listed in these topic lists: Cemeteries & Burial Sites • Science & Medicine. A significant historical month for this entry is May 1668.

Location. 44° 5.723′ N, 87° 41.695′ W. Marker is in Manitowoc, Wisconsin, in Manitowoc County. Marker is on Meadow Lane west of Broadway Street, on the left when traveling west. Touch for map. Marker is at or near this postal address: 3854 Meadow Ln, Manitowoc WI 54220, United States of America. Touch for directions. 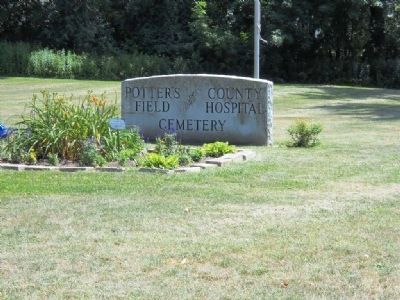 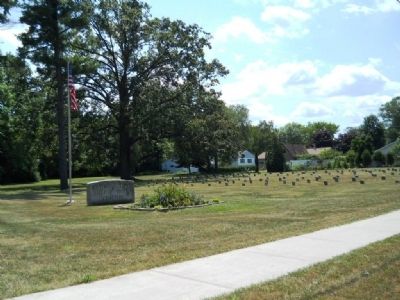