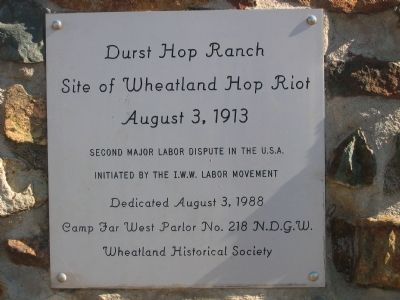 Photographed By Syd Whittle, February 15, 2006
1. Durst Hop Ranch Marker
Inscription.
Durst Hop Ranch. Site of Wheatland Hop Riot. , Second major labor dispute in the U.S.A. , Initiated by the I.W.W. Labor movement. . This historical marker was erected in 1988 by Camp Far West Parlor No. 218 Native Daughters of the Golden West and the Wheatland Historical Society. It is in Wheatland in Yuba County California

Second major labor dispute in the U.S.A.
Initiated by the I.W.W. Labor movement.

Erected 1988 by Camp Far West Parlor No. 218 Native Daughters of the Golden West and the Wheatland Historical Society. (Marker Number 1003.)

Topics and series. This historical marker is listed in these topic lists: Labor Unions • Notable Events. In addition, it is included in the California Historical Landmarks, and the Native Sons/Daughters of the Golden West series lists.

Location. 39° 0.76′ N, 121° 25.13′ W. Marker is in Wheatland, California, in Yuba County. Marker is at the intersection of 6th Street and South A Street, on the right when traveling east on 6th Street. Touch for map. Marker is in this post office area: Wheatland CA 95692, United States of America. Touch for directions.

Other nearby markers. At least 8 other markers are within 7 miles of this marker, measured as the crow flies. Johnson's Ranch (approx. ¼ mile away); Holland House (approx. 0.4 miles away); Chinese Pyre (approx. 1.1 miles away); Overland Emigrant Trail (approx. 2.6 miles away); Union Shed 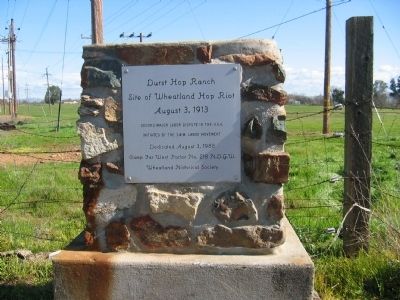 More about this marker. This site is a California Registered Historical Landmark (No. 1003).

Regarding Durst Hop Ranch. The Wheatland Hop Riot was one of the most important and well-known events in California labor history. A bloody clash occurred at the Durst Ranch on August 3, 1913, climaxing growing tensions brought about by the difficult conditions farm laborers at the ranch endured. The riot resulted in four deaths and many injuries. It focused public opinion for the first time on the plight of California's agricultural laborers, and resulted in new state legislation to regulate labor camp conditions. A new State Commission on Immigration and Housing was created to help improve working conditions. Beyond that, the Wheatland Hop Riot was the first major farm labor confrontation in California and the harbinger of decades of attempts to organize or control agricultural labor. 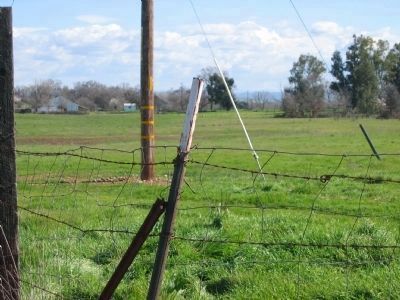