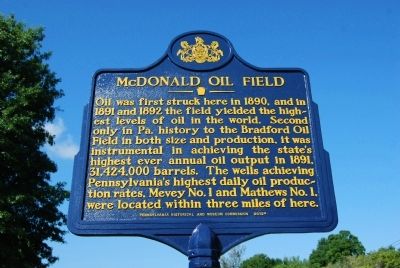 Photographed By Mike Wintermantel, August 18, 2012
1. McDonald Oil Field Marker
Inscription.
McDonald Oil Field. . Oil was first struck here in 1890, and in 1891 and 1892 the field yielded the highest levels of oil in the world. Second only in Pa. history to the Bradford Oil Field in both size and production, it was instrumental in achieving the state's highest ever annual oil output in 1891, 31,424,000 barrels. The wells achieving Pennsylvania's highest oil production rates, Mevey No. 1 and Mathews No. 1 were located within three miles of here. . This historical marker was erected in 2012 by Pennsylvania Historical and Museum Commission. It is in McDonald in Washington County Pennsylvania

Oil was first struck here in 1890, and in 1891 and 1892 the field yielded the highest levels of oil in the world. Second only in Pa. history to the Bradford Oil Field in both size and production, it was instrumental in achieving the state's highest ever annual oil output in 1891, 31,424,000 barrels. The wells achieving Pennsylvania's highest oil production rates, Mevey No. 1 and Mathews No. 1 were located within three miles of here.

Topics and series. This historical marker is listed in this topic list: Industry & Commerce. In addition, it is included in the Pennsylvania Historical and Museum Commission series list. A significant historical year for this entry is 1890.

Location. 40° 21.988′ N, 80° 14.464′ W. Marker is in McDonald, Pennsylvania, in Washington County. Marker is on West Lincoln Avenue (Pennsylvania Route 980) 0.1 miles west of 6th Avenue, on the right when traveling east. Located at Heritage Park near the McDonald Public Library. Touch for map. Marker is in this post office area: Mc Donald PA 15057, United States of America. Touch for directions.

Other nearby markers. At least 8 other markers are within 6 miles of this 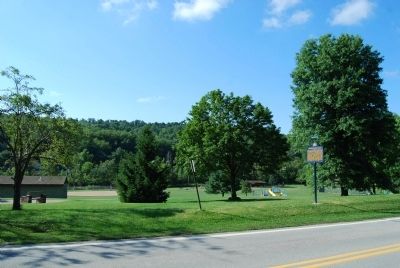 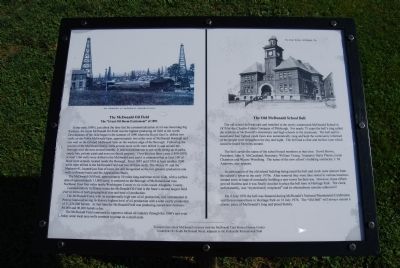 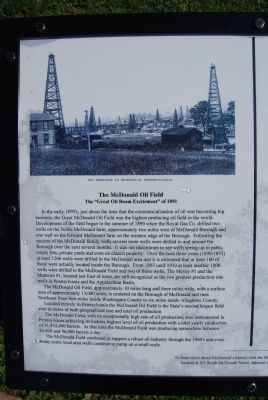 Photographed By Mike Wintermantel, August 18, 2012
4. McDonald Oil Field sign
In the early 1890's, just about the time that the commercialization of oil was becoming big business, the Great McDonald Oil Field was the highest producing oil field in the world. Development of the field began in the summer of 1890 when the Royal Gas Co. drilled two wells on the Noble McDonald farm, approximately two miles west of McDonald Borough and one well on the Edward McDonald farm on the western edge of the Borough. Following the success of the McDonald family wells several more wells were drilled in and around the Borough over the next several months. It was not uncommon to see wells spring up in parks, empty lots, private yards and even on church property. Over the next three years (1890-1893) at least 1266 wells were drilled in the McDonald area and it is estimated that at least 100 of those were actually located inside the Borough. From 1893 until 1910 at least another 1000 wells were drilled in the McDonald Field and two of those wells, The Mevey #1 and The Mathews #1, located just East of town, are still recognized as the two greatest production rate wells in Pennsylvania and the Applachian Basin.
The McDonald Oil Field, approximately 10 miles long and 3 miles wide, with a surface area of approximately 13,000 acres, is centered on the Borough of McDonald and runs Northeast from four miles inside Washington County to six miles inside Allegheny County.
Located entirely in Pennsylvania the McDonald Oil Field is the State's second largest field ever in terms of both geographical size and total oil production.
The McDonald Oil Field, with its exceptionally high rate of oil production, was instrumental in Pennsylvania achieving its historic highest level of oil production of with a total yearly production of 31,424,000 barrels. At that time the McDonald Field was producing somewhere between 84,000 and 96,000 barrels a day.
The McDonald Field continued to support a robust oil industry through the 1960's and even today some local area wells continue to pump on a small scale. 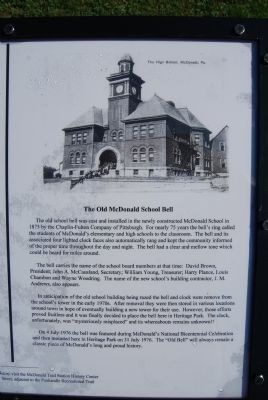 Photographed By Mike Wintermantel, August 18, 2012
5. The Old McDonald School Bell sign
The old school bell was cast and installed in the newly constructed McDonald School in 1875 by the Chaplin-Fulton Company of Pittsburgh. For nearly 75 years bell's ring called the students of McDonald's elementary and high schools to the classroom. The bell and its associated four lighted clock faces also automatically rang and kept the community informed of the proper time throughout the day and night. The bell had a clear and mellow tone which could be heard for miles around.

In anticipation of the old school building being razed the bell and clock were removed from the school's tower in the early 1970's. After removal they were then stored in various locations around town in hope of eventually building a new tower for their use. However, those efforts proved fruitless and it was finally decided to place the bell here in Heritage Park. The clock, unfortunately, was "mysteriously misplaced" and its whereabouts remains unknown!!

On 4 July 1976 the bell was featured during McDonald's Bicentennial Celebration and then mounted here in Heritage Park on 31 July 1976. The "Old Bell" will always remain a classic piece of McDonald's long and proud history. 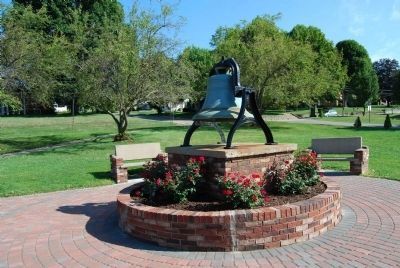