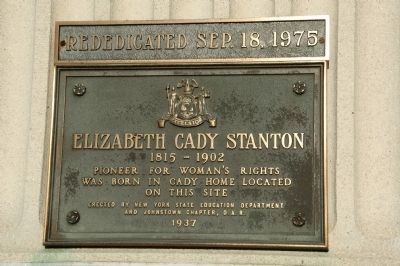 Topics and series. This historical marker is listed in these topic lists: Civil Rights • Women. In addition, it is included in the Elizabeth Cady Stanton series list. A significant historical date for this entry is September 18, 1923.

Photographed By Howard C. Ohlhous
2. Elizabeth Cady Stanton Marker
The marker is mounted on the side of the bank, at the base of the second column from the right.

Regarding Elizabeth Cady Stanton. Fulton County's most famous daughter recognized as a child the injustices women in her society had to endure. In Elizabeth's autobiography, she refers to her childhood experiences that "changed considerably the current of my life." She learned about laws that were unfavorable to women in her father's law office, and wanted to cut them out of the law books. It was her father, Judge Daniel Cady, who told her she would have to prepare a speech and go to Albany to talk to legislators if she wanted to make a change. She would do this in 1854 to advocate for women's rights In 1884 she would return to Johnstown with Susan B. Anthony to work 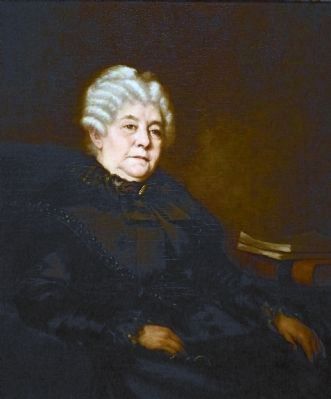 “Elizabeth Cady Stanton was a feminist from the start, refusing to include ‘Obey’ in her marriage vows to her husband; and when she spoke of God she used the female pronoun. Stanton helped organize the Seneca Falls Convention of 1848, which was the founding moment of the American women's rights movement, and she was the longtime president of the National Woman Suffrage Association. Although Stanton's goal was to give women political power through the ballot, she spearheaded other feminist goals, such as liberalizing divorce laws and reforming child-rearing methods. But unlike other early feminists, she always insisted on the primacy of women's right to vote over other reform objectives, including abolition. She wrote ‘Our “Pathway” is straight to the ballot box with no variableness nor shadow of turning.’” — National Portrait Gallery
on the third volume of the History of Woman Suffrage. During this time, she and Susan cast votes in the local school board election. It was here in Johnstown that Elizabeth was born, and inspired to work for women's rights, and became a mother herself.

Additional commentary.
1. Elizabeth Cady Stanton
Elizabeth Cady Stanton was a primary architect of the suffrage movement, organizer of the 1848 Women's Rights Convention in Seneca Falls, New York. For the next fifty years following the convention, Elizabeth played a significant leadership role in the women's rights movement. Elizabeth and her husband Anthony founded the National Women Suffrage Association to focus exclusively on women's rights and served as president. She was also active and effective in winning property rights for married women, equal guardianship of children,and liberalized divorce laws. Overall, Elizabeth used her brilliance, insightfulness, and eloquence to advocate for many important issues of her time.
— Submitted October 23, 2012, by Carlesia Young of Benton Harbor, Michgan.
Credits. This page was last revised on July 20, 2020. It was originally submitted on September 3, 2012, by Howard C. Ohlhous of Duanesburg, New York. This page has been viewed 735 times since then and 40 times this year. Photos:   1, 2. submitted on September 3, 2012, by Howard C. Ohlhous of Duanesburg, New York.   3. submitted on May 1, 2015, by Allen C. Browne of Silver Spring, Maryland. • Bill Pfingsten was the editor who published this page.
Share this page.