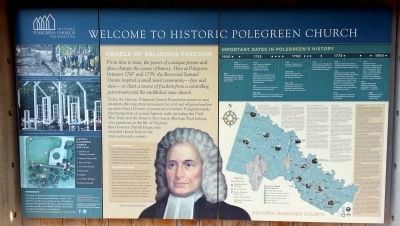 From time to time, the power of a unique person and place changes the course of history. Here at Polegreen, between 1747 and 1759, the Reverend Samuel Davies inspired a small rural community––free and slave–to chart a course of freedom from a controlling government and the established state church.

Today, the Historic Polegreen Church Foundation preserves and interprets this important movement for civil and religious freedom on more than 110 acres of protected viewshed. Polegreen marks the intersection of several historic trails including the Civil War Trails and the Road to Revolution Heritage Trail linking sites significant to the life of Virginia’s first Governor, Patrick Henry, who attended church here in the mid-eighteenth century.

Vision Statement
By 2018, the 275th Anniversary of the founding of Polegreen Church, the Foundation will be recognized for its leadership in the historic interpretation of civil and religious freedom in Colonial Virginia through preservation of the site, community outreach and educational programs. 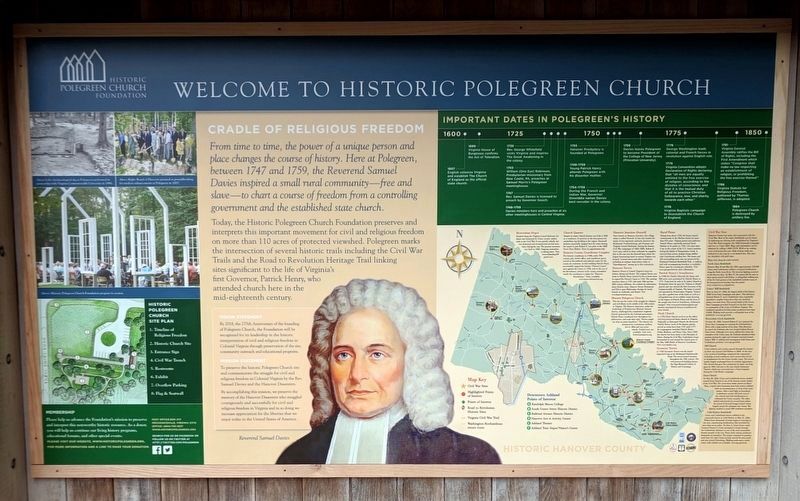 Photographed By Bernard Fisher, May 1, 2019
2. Welcome to Historic Polegreen Church Marker
2019 version with minor changes to the text.

Click or scan to see
this page online
Statement
To preserve the historic Polegreen Church site and commemorate the struggle for civil and religious freedom in Colonial Virginia by the Rev. Samuel Davies and the Hanover Dissenters.

By accomplishing this mission, we preserve the memory of the Hanover Dissenters who struggled courageously and successfully for civil and religious freedom in Virginia and in so doing we increase appreciation for the liberties that we enjoy today in the United States of America.

Membership
Please help us advance the Foundation’s mission to preserve and interpret this noteworthy historic resource. As a member, you will receive advance notice of Foundation programs including living histories, educational forums and other special events. Member benefits also include newsletters and discounts on facility use.

1607 English colonize Virginia and establish The Church of England as the official state church.
1699 Virginia House of Burgesses confirms the Act of Toleration.
1739 Rev. George Whitefield 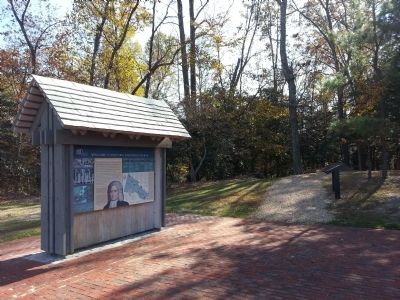 Photographed By Bernard Fisher, November 9, 2012
3. Welcome to Historic Polegreen Church Marker
visits Virginia and inspires The Great Awakening in colony.
1743 William (One Eye) Robinson, Presbyterian missionary from New Castle, PA, preaches at Samuel Morris’s Polegreen meetinghouse.
1747 Rev. Samuel Davies is licensed to preach by Governor Gooch.
1748-1759 Davies ministers here and preaches at six other meetinghouses in Central Virginia.
1755 Hanover Presbytery is founded at Polegreen.
1748-1759 Young Patrick Henry attends Polegreen with his dissenter mother.
1754-1759 During the French and Indian War, Governor Dinwiddie names Davies best recruiter in the colony.
1759 Davies leaves Polegreen to become President of the College of New Jersey (Princeton University).
1776 George Washington leads colonial and French forces in revolution against English rule.
1776 Virginia Convention adopts Declaration of Rights declaring that “all men are equally entitled to the free exercise of religion, according to the dictates of conscience; and that it is the mutual duty of all to practice Christian forbearance, love, and charity, towards each other.”
1776 Virginia Baptists campaign to disestablish the Church of England.
1786 Virginia Statute for Religious Freedom, authored by Thomas Jefferson, is adopted.
1791 Virginia General Assembly ratifies the Bill of Rights, including the First Amendment which states “Congress 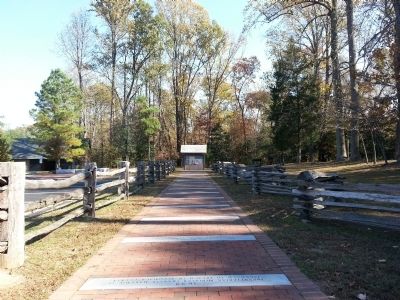 Photographed By Bernard Fisher, November 9, 2012
4. Welcome to Historic Polegreen Church Marker
shall make no law respecting an establishment of religion, or prohibiting the free exercise thereof.”
1864 Polegreen Church is destroyed by artillery fire.

Beaverdam Depot
Situated along the Virginia Central Railroad, the depot was destroyed by Union cavalry raiders early in the Civil War. It was quickly rebuilt, but was destroyed and reconstructed several more times during the wait. The present structure was built in 1866. Ongoing restoration is taking place.

Church Quarter
Despite its name, Church Quarter was built in 1843 as a residence. It survives as the best-preserved antebellum log dwelling in the region. Stonewall Jackson reportedly stopped here for water during his march to join Robert E. Lee prior to the 1862 Seven Days Battles. Tours by appointment only. 804-883-5411 or 804-798-5887.

Hanover County Courthouse Complex
The historic courthouse (c.1735) along with the tavern, and early 19th century jail and clerk’s office, served as the political and judicial center for the county. Here Patrick Henry successfully argued the famous “Parson’s Cause” case against the Crown in 1763, and on the eve of the Revolution, citizens of the county assembled inside the courthouse to adopt the “Hanover Resolutions.” The courthouse is open by appointment. 804-53 7-5815.

Hanover Junction-Doswell
Once known as Hanover Junction, this village today is called Doswell. In this tiny hamlet the tracks of two important railroads intersect: the Richmond, Fredericksburg, and Potomac and Virginia Central Railroads. During the famous Civil War campaigns of 1862-1864, Robert E. Lee’s army relied on these railroads for supplies. Just to the east was the Doswell farm where the largest horseracing track in central Virginia was located. General stores and other businesses including an antique shop known today as “Squashapenny” sprang up in this community.

Polegreen Church
This site was the center of the struggle for religious and civil liberty in the middle of the 18th century in Virginia. The Hanover dissenters, under the leadership of Presbyterian Minister Samuel Davies, challenged the established Anglican Church sponsored by the Colonial government. Patrick Henry worshiped here throughout this adolescence, and years later said, “Davies taught me what an orator should be.” The church was destroyed by Confederate artillery fire in 1864 and was never rebuilt. www.historicpolegreen.org.

Rural Plains
Dating from about 1723, the house stayed continuously in the Shelton family for more than 275 years. Virginia patriot and politician Patrick Henry reportedly married Sarah Shelton in its parlor in 1754. 110 years later it lay in the center of the U.S. Army’s position during the Battle of Totopotomoy Creek. It survived that action, despite being riddled with Confederate artillery fire. The house and 124 surrounding acres now are preserved by Richmond National Battlefield Park. 804-226-1981 or www.nps.gov/rich.

Scotchtown
(c.1720) By Charles Chiswell, the house and 960 acres were purchased by Patrick Henry in 1771. From here he rode to St. John’s Church in Richmond where he gave his “Liberty or Death” speech. Also served as childhood home of DoIley Madison. The home is owned and operated by APVA Preservation Virginia and is furnished with a spectacular collection of period antiques. 804-227- 3500.

Slash Church
(c.1729) Slash Church survives as the oldest and best-preserved frame church in Virginia. Originally an Episcopal Church, the Reverend Patrick Henry, uncle of the famous patriot, served as rector here from 1737 until 1777. Its congregation included Patrick Henry, Dolley Madison, and Henry Clay. Since 1842 the church has been home to the Disciples of Christ. During the Civil War, Confederate troops bivouacked in and around the church prior to the May 1862 Battle of Hanover Courthouse.

Sycamore Tavern
(c.1732) Sycamore Tavern was the fourth stagecoach stop on the Richmond-Charlottesville Road. The tavern hosted travelers throughout the 19th century. The well preserved building houses the Page Memorial Library of History and Genealogy. 804-883-5355.

Hanover County has many sites associated with the Civil War. Most of the major battlefields can be found by following two driving trails established by Virginia’s Civil War Trails program: the 1862 Peninsula Campaign and Lee vs. Grant 1864. Maps and information can be obtained by calling 1-888-CIVIL WAR or by visiting www.civilwartraveler.com. Both of these trails are indicated on the map by a red dashed line. The sites are identified with gold stars.

Major sites along the trails include:

North Anna Battlefield
Between May 23 and May 26, 1864, approximately 130,000 Union and Confederate soldiers occupied fortifications along the North Anna River. The heaviest fighting occurred on the first two days. On May 27, the armies left the area on their march toward Cold Harbor. A self-guided walking tour of the Ox Ford portion of the battlefield includes some of the best-preserved trenches from the period. 804-365-4695. www.co.hanover.va.us/parksrec.

Gaines’ Mill Battlefield
Here on June 27, 1862, the largest battle of the famous 1862 Seven Days Campaign took place. That afternoon General Robert E. Lee’s Confederate army repeatedly assaulted a smaller Union force that was stretched along a two-mile front. This second battle of the Seven Days Campaign provided General Lee his first victory as commander of the Army of Northern Virginia. The combined casualties for both armies numbered more than 15,000. Walking trails provide a self-guided tour of the battlefield. 804-226-1981. www.nps.gov/rich.

Beaverdam Creek Battlefield
On June 26, 1862, General Robert E. Lee initiated the Seven Days Campaign by crossing the Chickahominy River with a large portion of his army. That afternoon he struck the Federals who were located behind Beaver Dam Creek. Although Lee’s army suffered five times the casualties of the Union army, the Federals abandoned their position during the night and retreated eastward toward Gaines’ Mill. A walking trail encompasses both Union and Confederate positions. 804-226-1981. www.nps.gov/rich.

Old Church
Union infantry and cavalry passed through this hamlet on their way toward Cold Harbor in 1864. At the time a few scattered buildings comprised the community including several residences and a tavern that served as headquarters for the Union cavalry corps. The tavern stands largely unchanged from its wartime appearance. The church that gave the community its name was long gone by 1861, but just to the east stands Immanuel Church, which was converted into a Union hospital during the Cold Harbor campaign.

Enon Church
On May 28, 1864, Union and Confederate forces clashed around Enon Church in one of the fiercest cavalry battles of the Civil War. The seven-hour battle, known as Haw’s Shop, erupted when horsemen from both armies collided while on reconnaissance in front of the main armies. After a brief fight on horseback, Confederate cavalry fell back west of the church and built fortifications to withstand the Union assaults. The sides battled indecisively for several hours before the arrival of General George Custer’s Union brigade turned the stalemate into victory. The fighting resulted in nearly 800 combined casualties.

Cold Harbor Battlefield
Union and Confederate forces collided at the crossroads known as Cold Harbor on May 31, 1864. Within hours thousands of troops began to converge on the area, constructing fortifications that stretched for more than seven miles. On June 3, Union forces under General Ulysses S. Grant attempted to break through the Confederate defenses in one of the most memorable frontal assaults of the war. These futile attacks produced thousands of casualties. The armies remained in position until June 12, when Grant secretly moved his men south and east toward Petersburg. Walking trails and a visitor center with exhibits are available. 804-226-1981. www.nps.gov/rich.

Topics. This historical marker is listed in these topic lists: Churches & Religion • Colonial Era • Patriots & Patriotism • War, US Civil. A significant historical month for this entry is May 1862.

Location. 37° 38.716′ N, 77° 19.796′ W. Marker is in Mechanicsville, Virginia, in Hanover County. Marker can be reached from the intersection of Heatherwood Drive (Virginia Route 1750) and Rural Point Road (Virginia Route 643). Touch for map. Marker is at or near this postal address: 6411 Heatherwood Drive, Mechanicsville VA 23116, United States of America. Touch for directions.

More about this marker. (captions)
Above Left: Archaeological dig at Polegreen performed in partnership with Virginia Commonwealth University in 1990.
Above Right: Board of Directors pictured at groundbreaking for modern enhancements at Polegreen in 2007.
Above: Historic Polegreen Church Foundation program in session.