In Memory of Dr. Lillie May Jackson 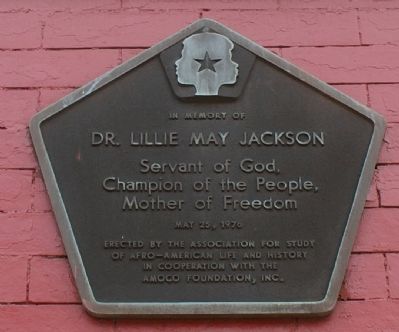 Servant of God,
Champion of the People,
Mother of Freedom

Erected by the Association for Study
of Afro-American Life and History
In Cooperation with the
Amoco Foundation, Inc.

Erected 1976 by Association for Study of Afro-American Life and History. 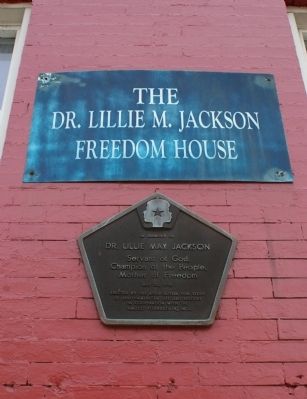 Also see . . .  Biography of Jackson from the Baltimore Sun. (Submitted on March 15, 2008, by Christopher Busta-Peck of Shaker Heights, Ohio.)

Additional comments.
1. Destruction of Lillie May Jackson
On October 2015, following 30 years of neglect, Bethel AME Church decided to demolish this building. Lillie May Jackson herself bequeathed the building to the church, and wanted it to be forever known as The Freedom House.
Despite protests by neighbors, preservationists and civil rights activists, the church continued with the demolition to create a "priority parking space" for Pastor Frank Reid and "First Lady Marla", his wife. They told their congregation and testified at the City CHAP hearing that the building had "no historicity".
The bronze plaque that 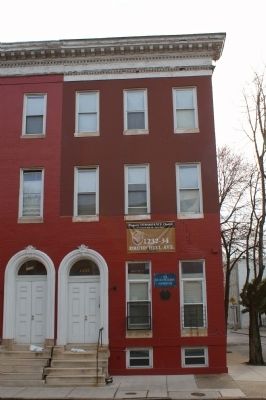 By Christopher Busta-Peck, March 15, 2008
3. Lillie May Jackson house
adorned the building was removed and broken in half.
Pastor Frank Reid III, whose grandfather and father spearheaded the American Civil Rights Movement with Dr. Lillie May Jackson, is responsible for the demolition of this and many other buildings related to the Civil Rights Movement in the historic district surrounding the church.
A tragic loss for the City of Baltimore- and the entire county -to lose one of the most important buildings in the African American Civil Rights Movement that stood as a testament to the dedication that many made for the good of all humanity.
Mayor Shelia Dixon, Mayor Kurt Schmoke, and Baltimore City Comptroller Joan Pratt are all members of this high powered congregation.
The $10 million dollar operating budget of this congregation is largely funded by the profits from Pier 6 Pavilion at Baltimore's Inner Harbor- a City owned operation.
— Submitted November 23, 2016, by Marti Pirelli of Baltimore, Maryland. 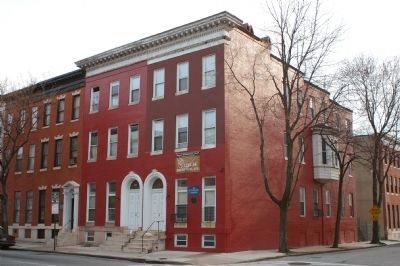