Triumph of “The Charlottesville Twelve” 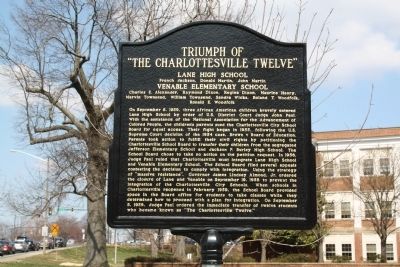 On September 8, 1959, three African American children bravely entered Lane High School by order of U.S. District Court Judge John Paul. With the assistance of the National Association for the Advancement of Colored People, the children’s parents sued the Charlottesville City School Board for equal access. Their fight began in 1955, following the U.S. Supreme Court decision of the 1954 case, Brown v Board of Education. Parents took action to fulfill their civil rights by petitioning the Charlottesville School Board to transfer their children from the segregated Jefferson Elementary School and Jackson P. Burley High School. The School Board chose to take no action on the petition request In 1956, Judge Paul ruled that Charlottesville must integrate Lane High School and Venable Elementary School. The School Board filed several appeals contesting the decision to comply 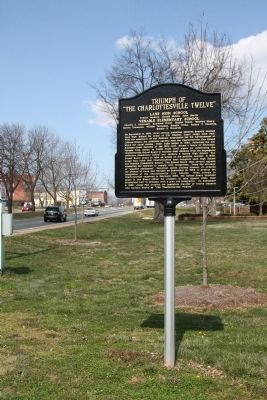 Erected 2012 by City of Charlottesville. 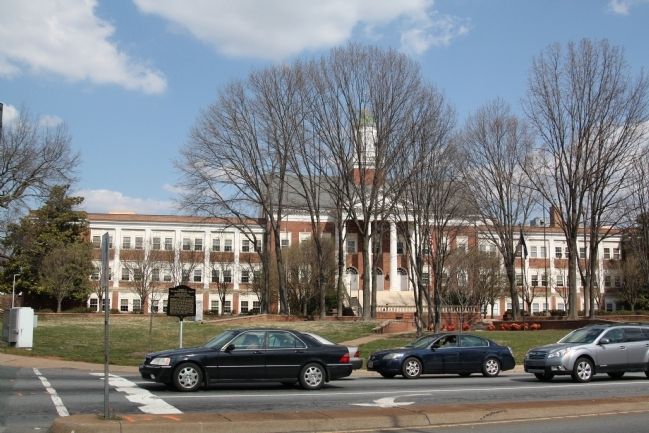 More about this marker. Marker is a one-sided marker, with the blank face towards the former Lane High School, now the Albemarle County Office Building.

Related markers. Click here for a list of markers that are related to this marker. This is a list of Brown v. Board of Education markers.

Also see . . .
1. On Brown's 50th: Why Charlottesville Schools Were Closed. 2004 article by Lisa Provence. “Julia Martin is 80 and elegant in the Lankford Avenue home where she’s lived since 1947. She signed on to the Allen lawsuit when her oldest son was attending all-black Burley on Rose Hill Drive. She, too, objected to the idea of her children walking by one high school—Lane—to get to another. Another thing that rankled Martin was weather closures. Because Albemarle County kids—whose buses had to travel country roads—[also] attended Burley, bad weather often closed the school, even if city residents could get there with no difficulty. ‘I paid city taxes,’ says Martin. ‘After a while, it hit me. Why should I be ruled by the county?’ Martin was working as a domestic, and her husband, John, was a waiter at Farmington Country Club when they joined the lawsuit. ‘I didn’t think I was wrong,’ she says. And as for her children, she says, ‘I wasn’t afraid anyone would hurt them.’ She pauses. ‘Maybe I was young and foolish’.” (Submitted on March 31, 2013.)