Battle of the J.R. Williams 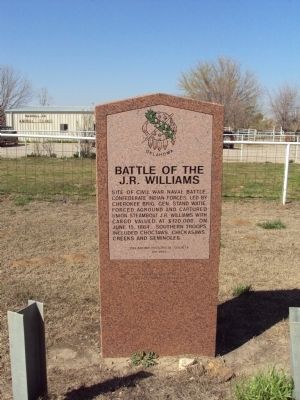 By Michael Manning, March 26, 3013
1. Battle of the J.R. Williams Marker
Inscription.
Battle of the J.R. Williams. . Site of Civil War naval battle. Confederate Indian forces led by Brig. Gen. Stand Watie, forced aground and captured Union Steamboat J.R. Williams with cargo worth $120,000, on June 15, 1864. Southern troops included Choctaws, Chickasaws, Creeks and Seminoles. . This historical marker was erected in 1995 by Oklahoma Historical Society. It is in Stigler in Haskell County Oklahoma

Topics and series. This historical marker is listed in these topic lists: Native Americans • War, US Civil • Waterways & Vessels. In addition, it is included in the Oklahoma Historical Society series list.

Location. 35° 15.654′ N, 95° 3.756′ W. Marker is in Stigler, Oklahoma, in Haskell County. Marker is at the intersection of State Highway 9 and Garland-Tamaha Road, on the right when traveling west on State Highway 9. Marker is located approximately 50 yards west of Garland-Tamaha Road on SR 9. Actual location of the J.R. Williams capture and sinking is approximately 10 miles northeast on the Canadian River near the town of Tamaha. Touch for map. Marker is in this post office area: Stigler OK 74462, United States of America. Touch for directions.