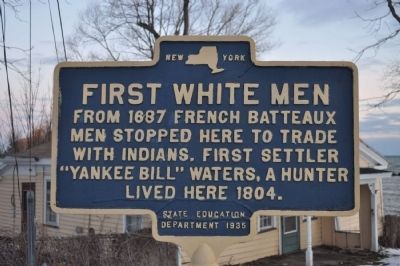 Topics. This historical marker is listed in these topic lists: Colonial Era • Native Americans • Settlements & Settlers. A significant historical year for this entry is 1687. 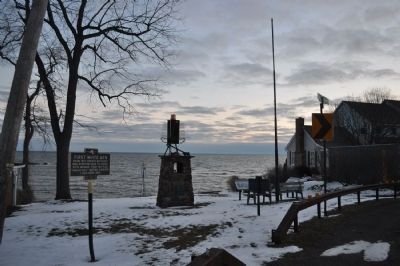 Photographed By Yugoboy, March 24, 2013
2. First White Men Marker as seen facing north
Behind the First White Men marker, can be seen the Pultneyville War of 1812/Lake Ontario Captains/Lighthouse monument. Two other markers (including the Battle of Pultneyville) are to the right side of the image as well.

On the evening of the 19th of March 1864, Mr. William Waters, closed his eyes upon the bright scenes of this life, to awaken no more upon this side of the grade; that so coldly awaits the coming of all the living. He was one of those hardy and adventurous Pioneers who made the first opening in the vast wilderness that then bordered the shores of Lake Ontario; but is now the abode of thousands of happy denizens who have no realizing sense of the privations, sufferings, toil, and self denials, of those brace men and women, who so valiantly laid the foundations of their prosperity and happiness. The subject of this notice was born in Yorkshire, England; and immigrated to America in 1804, and adjourned for a season in Geneva, Ontario Co., N.Y. In 1806 he came to the town of Williamson, and wending his way through the unbroken forest, till he at length found a spot suitable for a residence for one 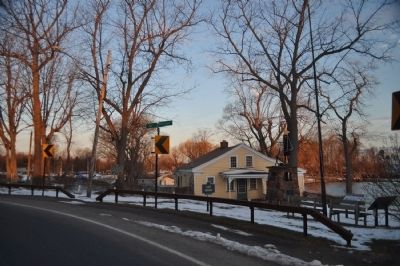 Photographed By Yugoboy, March 24, 2013
3. First White Men Marker as seen facing West
of his indomitable resolution: purchased a lot and settled on the wild shore of the lake, where he built a log cabin, and commenced the life of an independent farmer; which he pursued successfully till competency and old age invited him to retire from the cares of business. Though an alien by birth, he was an American at heart, and supported with becoming zeal and firmness the Republican institutions of his adopted country.

He was highly respected, held several important offices in the town; reared a large family most of whom are living, respected and esteemed; and died at the advanced age of 84 years.