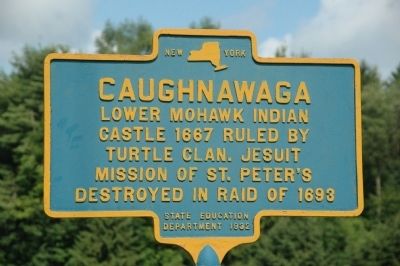 Topics. This historical marker is listed in these topic lists: Colonial Era • Forts and Castles • Native Americans. A significant historical year for this entry is 1667. 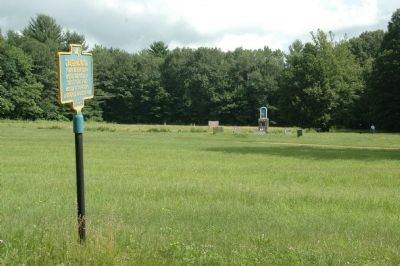 An interpretive sign on the site states the following:

1666 - 1693
Caughnawaga Castel Site
Declared a National Historical Place, August of 1973
Archeological investigations of this site were started in 1943. This consisted of surface searching only.
In Spring of 1945 the field was plowed. During June of 1945 a test trench was opened within one of the many evident darkened areas on the surface. A number of post molds were discovered in the soil, but none to indicate a stockade line.
The Van Epps-Hartley Chapter of the N.Y.S. Archeological Association dug a trench 60 feet long and 5 feet wide in 1948. The stockade lines, however, were not located.
Beginning in 1950 the native American Village (Castle) of Caughnawaga was thoroughly excavated by Fr. Thomas Grassmann, a Conventual Franciscan Friar, with the help of the N.Y.S. Archeological Association. It was completed in 1956.
The turtle Clan of the Mohawk lived in this "castle" of Caughnawaga. A castle refers back to a European term meaning "fortified". This castle was surrounded by a wooden stockade, 15 to 18 feet high, protecting from intruders. Caughnawaga means "on the rapids" or "on the water," referring to the Mohawk River. This castle is the only completely excavated Iroquois Village in the world.
It was here in this castle that Blessed Kateri Tekakwitha lived a 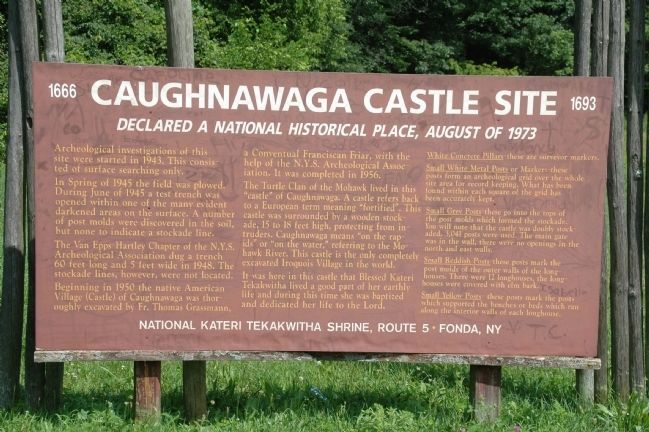 By Howard C. Ohlhous, July 5, 2013
3. Caughnawaga Interpretive Sign
1666 - 1693
Caughnawaga Castel Site
Declared a National Historical Place, August of 1973
good part of her earthly life and during this time she was baptized and dedicated her life to the Lord.
White Concrete Pillars-these are surveyor markers.
Small-White-metal-Posts or Markers-these posts form an archeological grid over the whole site are for record keeping. What has been found within each square of the grid has been accurately kept.

Small Grey Posts-these go into the tops of the post molds which formed the stockade. You will note that the castle was doubly stockaded. 3,041 posts were used. The main gate was in the wall, there were nop openings in the north and east walls.

Small Reddish Posts-these posts mark the post molds of the outer walls of the longhouses. There were 12 longhouses, the longhouses were covered with elm bark.

Small Yellow Posts- these posts mark the posts which supported the benches or beds which ran along the interior walls of each longhouse. By Howard C. Ohlhous, July 5, 2013
4. Caughnawaga Site
In the open field beyond the collection of memorials is the Caughnawaga archeological site. The small reddish posts in this view mark the location of the outer walls of the longhouses. 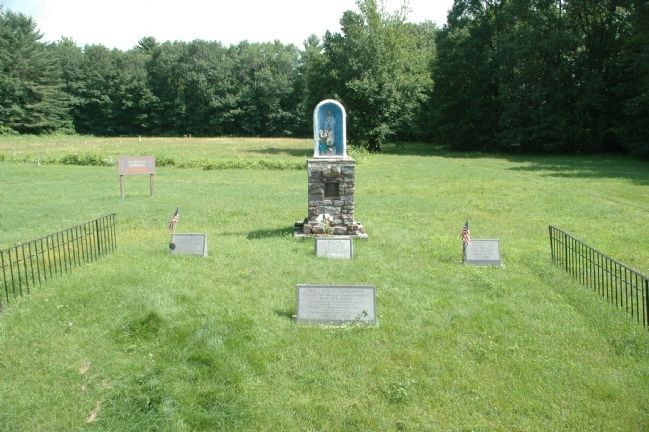 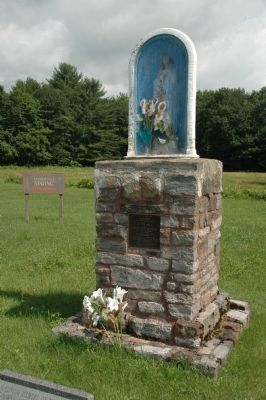 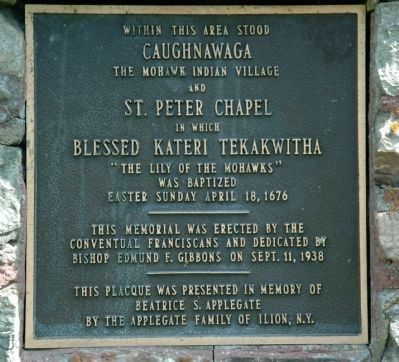 By Howard C. Ohlhous, July 5, 2013
7. Caughnawaga Plaque
Within This Area Stood
Caughnawaga
The Mohawk Indian Village
And
St. Peter Chapel
In Which
Blessed Kateri Tekakwitha
"The Lily of the Mohawks"
Was Baptized
Easter Sunday April 18, 1676
______________
The Memorial Was Erected By The
Conventual Franciscans And Dedicated By
Bishop Edmund F. Gibbons On Sept. 11, 1938
______________
This Plaque Was Presented In Memory Of
Beatrice S. Applegate
By The Applegate Family Of Ilion, N.Y. 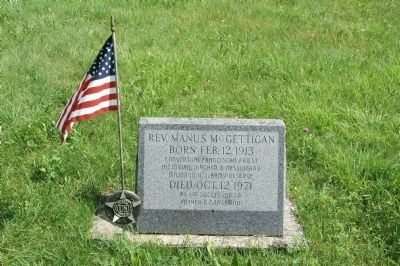 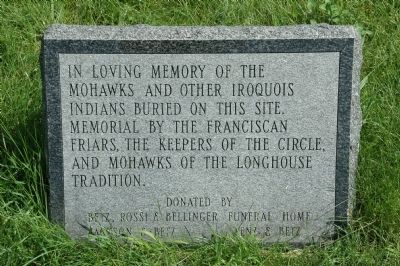 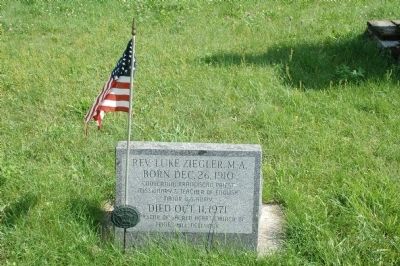