The Confederate Circle at Evergreen 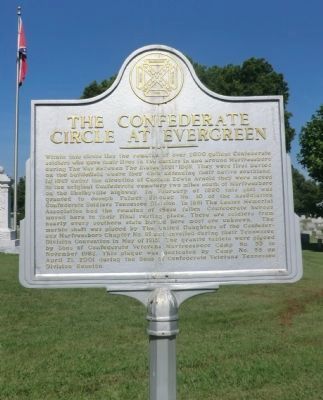 Within this circle lies the remains of over 2,000 gallant Confederate soldiers who gave their lives in the battles in and around Murfreesboro during The War Between The States 1861-1865. They were first buried on the battlefield where they died defending their native southland. In 1867 under the direction of Captain Edwin Arnold they were moved to the original Confederate cemetery two miles south of Murfreesboro on the Shelbyville highway. In February of 1890 this plot was granted to Joseph Palmer Bivouac No. 10 of the Association of Confederate Soldiers Tennessee Division. In 1891 The Ladies Memorial Association had the remains of these fallen Confederate heroes moved here to their final resting place. There are soldiers from nearly every southern state buried here, most are unknown. The marble shaft was placed by The United Daughters of the Confederacy Murfreesboro Chapter No. 91 and unveiled during their Tennessee Divisions Convention in May of 1915. The granite tablets were placed by the Sons of Confederate Veterans Murfreesboro Camp No. 33 in April 21, 2001 during the Sons of Confederate Veterans Tennessee Division Reunion. 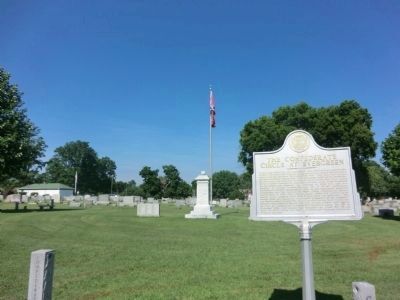 By Don Morfe, July 26, 2013
2. The Confederate Circle at Evergreen Marker
2001 by Sons of Confederate Veterans.

Location. 35° 51.072′ N, 86° 22.858′ W. Marker is in Murfreesboro, Tennessee, in Rutherford County. Marker is on Greenland Drive near North University Street, on the right when traveling west. Located in Evergreen Cemetery. Touch for map. Marker is in this post office area: Murfreesboro TN 37130, United States of America. Touch for directions. 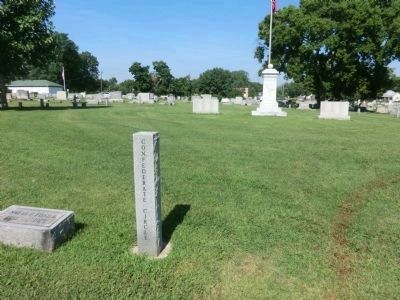 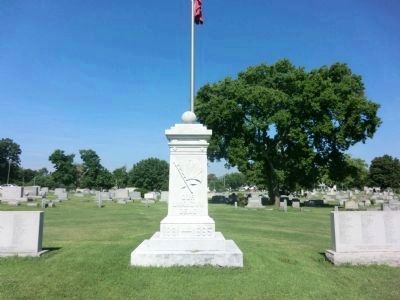