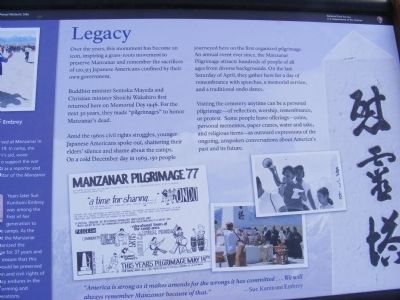 By Don Morfe, July 10, 2009
1. Legacy Marker
Inscription.
Legacy. Manzanar National Historic Site. Over the years, this monument has become an icon, inspiring a grass-roots movement to preserve Manzanar and remember the sacrifices of 120,313 Japanese Americans confined by their own government.

Over the years, this monument has become an icon, inspiring a grass-roots movement to preserve Manzanar and remember the sacrifices of 120,313 Japanese Americans confined by their own government.
the ongoing, unspoken conversations about America’s past and future.

(Quote at the bottom of the marker:)
“America is strong as it makes amends for the wrongs it has committed…We will always remember Manzanar because of that.” –Sue Kunitomi Embry

(Inscription on the left side of the marker:)
Sue Kunitomi Embry 1923-2006-Sue Kunitomi arrived at Manzanar in May 1942, at age 19. In camp, she served as a teacher’s aid, wove camouflage nets to support the war effort, and worked as a reporter and then managing editor of the Manzanar Free Press.
Years later Sue Kunitomi Embry was among the first of her generation to speak out about the camps. As the driving force behind the Manzanar Committee, she organized the Manzanar Pilgrimage for 37 years and worked tirelessly to ensure that this site and its stories would be preserved to protect the human and civil rights of all. Today, Sue’s legacy endures in the ongoing work of informing and inspiring future generations.

Erected by National Park Service-United States Department of the Interior. 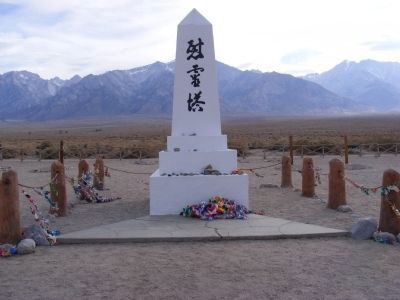 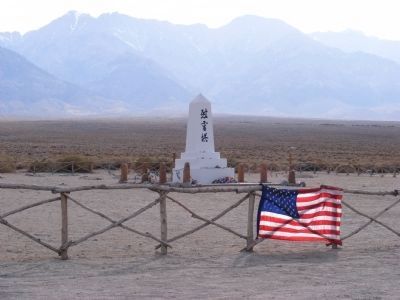 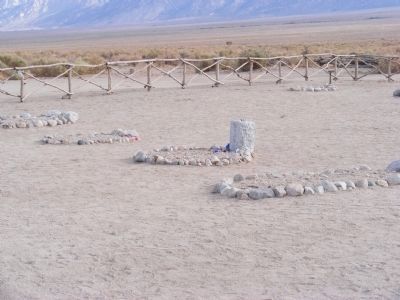 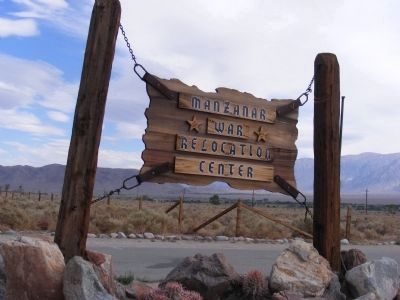 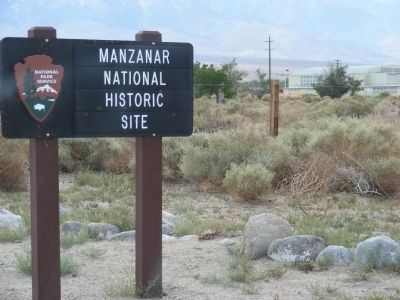 Editor’s want-list for this marker. Photo of a full view of the marker. • Full view of marker and its surroundings. • • Can you help?
Share This Page.