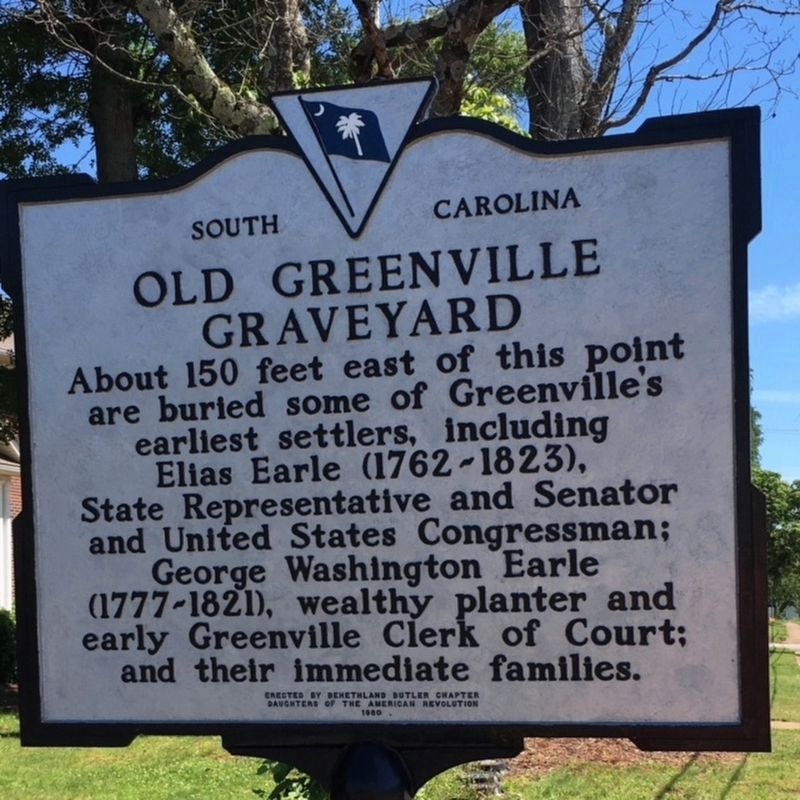 By Randy Tucker, May 2017
1. Old Greenville Graveyard Marker (newer version - same wording as old)
Inscription.
Old Greenville Graveyard. . About 150 feet east of this point are buried some of Greenville's earliest settlers, including Elias Earle (1762-1823), State Representative and Senator and United States Congressman; George Washington Earle (1777-1821), wealthy planter and early Greenville Clerk of Court, and their immediate families., Among the Earle descendants buried about 150 feet east of this point is George Earle Yancey, infant son of William Lowndes Yancey, known as the "father of secession," and Sarah Caroline Earle Yancey. In an unmarked grave is buried Elias Drayton Earle, South Carolina Superintendent of Public Works, 1847. . This historical marker was erected in 1971 by Behethland Chapter, Daughters of the American Revolution. It is in Greenville in Greenville County South Carolina

About 150 feet east of this point are buried some of Greenville's earliest settlers, including Elias Earle (1762-1823), State Representative and Senator and United States Congressman; George Washington Earle (1777-1821), wealthy planter and early Greenville Clerk of Court, and their immediate families.

Among the Earle descendants buried about 150 feet east of this point is George Earle Yancey, infant son of William Lowndes Yancey, known as the "father of secession," and Sarah Caroline Earle Yancey. In an unmarked grave is buried Elias Drayton Earle, South Carolina Superintendent of Public Works, 1847.

Topics and series. This historical marker is listed in these topic lists: Cemeteries & Burial Sites • War, US Civil. In addition, it is included in the Daughters of the American Revolution series list. A significant historical year for this entry is 1847. 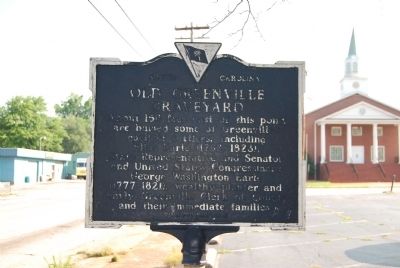 Click or scan to see
this page online
County. Marker is on Old Buncombe Road south of Morris Street, on the right when traveling north. The graveyard itself is located on Morris Street (within sight of the marker) behind a locked fence. Touch for map. Marker is in this post office area: Greenville SC 29611, United States of America. Touch for directions. 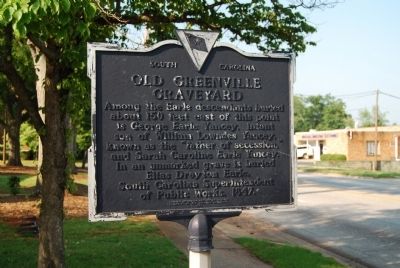 By Brian Scott, July 12, 2008
3. Old Greenville Graveyard Marker -
Reverse
of the earliest ironmasters of the South, and prospected and negotiated in the iron region of Georgia; member of South Carolina house of representatives, 1794-1797; member of the State senate in 1800; elected as a Republican to the Ninth Congress (March 4, 1805-March 3, 1807); elected to the Twelfth and Thirteenth Congresses (March 4, 1811-March 3, 1815); again elected to the Fifteenth and Sixteenth Congresses (March 4, 1817-March 3, 1821); died in Centerville, S.C., May 19, 1823; interment in Old Earle Cemetery, Buncombe Road, Greenville, S.C. (Source: Biographical Directory of the U.S. Congress.)
— Submitted September 25, 2009, by Brian Scott of Anderson, South Carolina.
2. About Elias Earle
Like many early settlers, the ancestors of Elias Earle left England for Virginia in the 1600s and then migrated south down the Great Wagon Road through the Shenandoah Valley to settle in the Carolinas. When Earle himself moved to Greenville in September 1787, he set to work, historical documents show, acquiring land, eventually amassing seven thousand acres and thirty-three slaves.

Perhaps Earle’s first public involvement surfaced during the debate over whether or not to relocate the Greenville courthouse to land he owned near the Reedy River. When the courthouse site was selected, 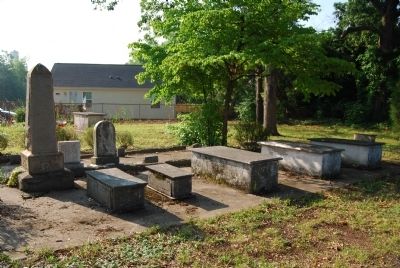 Undeterred by the loss, Earle continued to play an active role in government dealings, being elected both to the state house of representatives and the state senate. It was during his tenure in the senate that Earle was appointed to a committee considering the possibility of a wagon road to be built over the mountains of western North Carolina.

Under Earle’s leadership, the South Carolina legislature appropriated funds to construct a road “wide enough for four horses to pull a wagon with a load weighing one tone (sic).” Officials overseeing construction of the road actually contracted with Earle and one of his relatives, John William Gowen, to build it, and by November 1797 the road was completed. As modern-day U.S. 25, this thoroughfare continues to serve as a primary connector between the Upstate and western North Carolina. (Source: G: The Magazine of Greenville, Jan/Feb 09 64-65.)
— Submitted March 21, 2009, by Brian Scott of Anderson, South Carolina.
3. Elias Earle: History in Brief
At a Glance: As one of the original landowners in the village of Greenville, Earle served as a colonel in the South Carolina militia and would eventually be elected 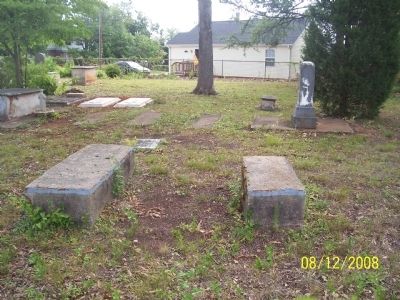 By Mitchell Gambrell
5. Old Greenville Graveyard
to the state house of representatives, the state senate, and the United States Congress. In 1802 he founded the state's first ironworks and the north fork of the Saluda River.

Claim to Fame: Earle was instrumental in securing funding for the construction of the first wagon road that would connect Greenville and the Upstate with trading markets in North Carolina and Tennessee.

Did You Know?: Earle and his wife, Francis Robinson, are buried in the Earle Family Cemetery, located on Old Bumcombe Road in the Sans Souci neighborhood.

Dirty Politics: During his 1806 re-election campaign for U.S. Congress, Earle once recruited supporters by setting up a bench in the middle of the street to freely dispense whiskey to all comers. Although he didn't win that bid for office, Earle later reclaimed his congressional seat. (Source: G: The Magazine of Greenville, Jan/Feb 09, pg 65.)
— Submitted September 25, 2009, by Brian Scott of Anderson, South Carolina.
4. William Lowndes Yancey (1814 - 1863)
Yancey, William Lowndes, (uncle of Joseph Haynsworth Earle), a Representative from Alabama; born at the Falls of the Ogeechee, Warren County, Ga., August 10, 1814; attended preparatory school and Williams College, Williamstown, Mass.; studied law 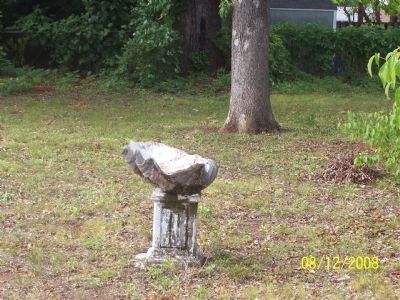 By Mitchell Gambrell, August 12, 2008
6. Old Greenville Graveyard-Clam Shell Monument
in Sparta, Ga., was admitted to the bar in 1834 and commenced practice in Greenville, S.C.; moved to Cahawba, Ala., in 1836; temporarily abandoned the practice of law and became a cotton planter; editor of the Cahawba Democrat and the Cahawba Gazette; moved to Wetumpka, Ala., in 1839 and resumed the practice of law; member of the State house of representatives in 1841; served in the State senate in 1843; elected as a Democrat to the Twenty-eighth Congress to fill the vacancy caused by the resignation of Dixon H. Lewis; reelected to the Twenty-ninth Congress and served from December 2, 1844, to September 1, 1846, when he resigned; moved to Montgomery, Ala., in 1846; delegate to the Democratic National Convention in 1848, 1856, and 1860; member of the State constitutional convention which convened in Montgomery January 7, 1861; appointed chairman of the commission sent to Europe in 1861 to present the Confederate cause to the Governments of England and France; elected to the first Confederate States Senate February 21, 1862; died at his plantation home, near Mongtomery, Ala., July 26, 1863; interment in Oakwood Cemetery. (Source: Biographical Directory of the U.S. Congress)
— Submitted September 25, 2009, by Brian Scott of Anderson, South Carolina.
5. Trial of William Lowndes Yancey 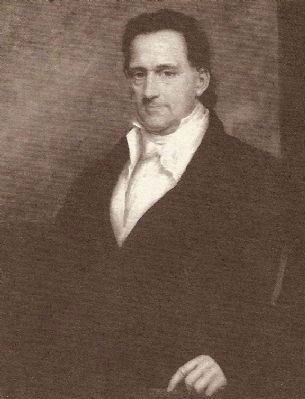 Yancey had come to Greenville in 1833 to read law with Benjamin Perry. It was at the height of the nullification controversy, and Yancey shared Perry's Unionist views. Yancey became editor of the Mountaineer in December 1834, and the next year he married Sarah Caroline Earle, the daughter of George Washington Earle, and began planting on Earle land with thirty-five slaves. In 1836 the Yanceys moved to Alabama, where he grew cotton, but they spent the summers in Greenville.19

In September 1838 Yancey attended a militia muster at which Waddy Thompson and Joseph N. Whitner of Anderson, the candidates for Congress, spoke. Afterwards Yancey made a disparaging remark about Thompson, and Elias Earle, the seventeen-year-old nephew of Thompson and a cousin of Sarah Yancey, responded by calling Yancey a liar. Yancey slapped Elias Earle, and Earle hit the older man with his riding crop. The following day Yancey apologized to Dr. Robinson Earle, Elias's father and his wife's uncle, and the affair seemed over. Several days later Dr. Earle attacked Yancey on the porch of Crittenden's store with the handle of a grain cradle and a knife. Yancey drew a pistol and mortally wounded the doctor. On the 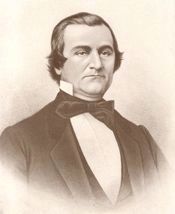