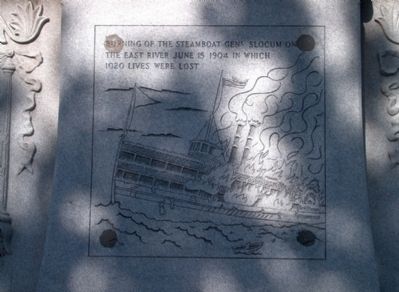 Burning of the Steamship Gen Slocum on the East River June 15 1904 in which 1020 lives were lost.

Erected 1905 by Survivors and relatives of the General Slocum disaster.

More about this memorial. To the left and right sides of the Slocum Memorial are smaller monuments: an angel with trumpet, left, and an angel with small child, right. Both have the same inscription that reads, in part, Dedicated to the Organization of General Slocum Survivors in Memory of Their Dead. 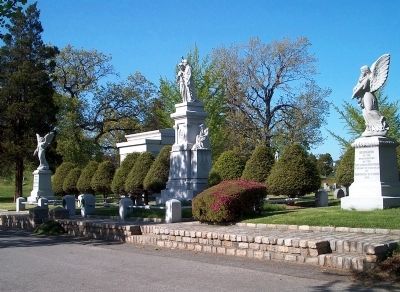 By Christian Belena, May 8, 2007
2. General Slocum Disaster Memorial Marker
On June 15, 1904, 1021 German immigrants (half of them children) died when their excursion steamship the General Slocum caught fire in the East River - destroying an entire neighborhood! More people died on this ship than on the Titanic and this was the single greatest loss in New York City up to the September 11, 2001 terrorist attacks. 1021 people (1/3 of those who died in the Twin Towers) burned or drowned. Sixty-one of the unidentified are buried under the memorial.

St. Marks Lutheran Church in the East Greenwich Village neighborhood of Little Germany chartered the General Slocum for a pleasant voyage to Locust Point on the north shore of Long Island. 1,358 church and community members consisting primarily of women and children departed from an East Third Street pier at about nine o'clock on the morning June 15, 1904. The ship never arrived at its destination.