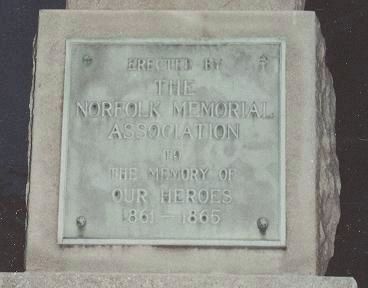 By Richard E. Miller, October 1993
1. "In Memory of Our Heroes."
Inscription.
West Point Monument at Elmwood Cemetery. In the Memory of Our Heroes, 1861 - 1865. Erected by the Norfolk Memorial Association in the memory of our heroes, 1861 - 1865 . This memorial was erected in 1909 by Norfolk Memorial Association. It is in Norfolk Auto Row Historic District in Norfolk Virginia

Erected by the Norfolk Memorial Association in the memory of our heroes, 1861 - 1865

Location. 36° 51.677′ N, 76° 17.096′ W. Marker is in the Norfolk Auto Row Historic District in Norfolk, Virginia. Memorial can be reached from East Princess Anne Road. The memorial is within Elmwood Cemetery, east of the south entrance off Princess Anne, and about two blocks west of Church Street (US Rte. 466). Touch for map. Marker is at or near this postal address: 238 East Princess Anne Road, Norfolk VA 23510, United States of America. Touch for directions. 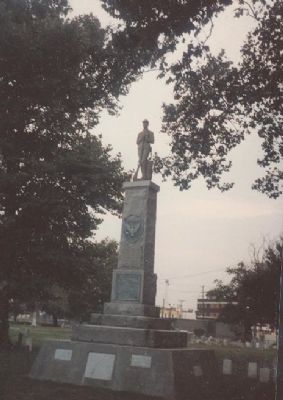 Additional comments.
1.
James E. Fuller (1846-1909) of Norfolk, a former slave and a former quartermaster in the First United States Colored Cavalry, was the motivating spirit behind the erection of Norfolk's African-American Civil War Memorial. An employee of the Norfolk Customs House, Fuller was largely responsible for the City Council's granting of a portion of [what was then known as] the West Point Cemetery in 1886 as a special burial place for Black Union veterans.

Depending on chicken pot pie suppers, raffles, and concerts to raise funds, the committee headed by Fuller finally had enough money to begin the monument in 1906. The cornerstone was laid on decoration Day the same year. Completed in 1920, the monument is topped by a brown metal statue of a Black Union private wearing a kepi, a tightly buttoned tunic, a sholder strap bearing the initials "U.S.A.," ribbed

Backed by a simulated wooden stump, the figure holds a regulation Civil War rifle and has a replica of a bayonet attached to his belt.

White marble plaques inserted in the monument's base record the names of the Grand Army of the Republic camps and other African-American groups which contributed to the memorial's completion.

Note: The statue is often said to depict Norfolk native and Medal of Honor recipient, Sgt. William Carney of the 54th Massachusetts Volunteer Infantry Regiment. This is also said to be the country's oldest memorial to Black veterans of the American Civil War."
— Submitted April 6, 2008, by Richard E. Miller of Oxon Hill, Maryland.