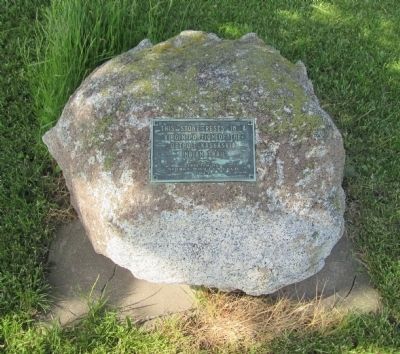 This stone rests in a virgin portion of the Detroit - Kaskaskia Indian Trail. Erected by the Sidell Woman's Club 1942

Topics. This historical marker is listed in these topic lists: Native Americans • War, French and Indian. A significant historical year for this entry is 1942.

Location. 39° 52.793′ N, 87° 50.015′ W. Marker is near Sidell, Illinois, in Vermilion County. Marker is at the intersection of Road 100N and 740th St., on the left when traveling east on Road 100N. The boulder with plaque affixed on its south face sits on the north side of the E - W road (100 N) abour 2 miles SW of Sidell, Illinois. The marker sits several yards east of the above intersection in a yard just off the road. This road is the southern border of Vermilion County. Edgar County road intersection 2800 N and 740 E is just east of the boulder. Touch for map. Marker is in this post office area: Sidell IL 61876, United States of America. Touch for directions.

Other nearby markers. At least 8 other markers are within 12 miles of this marker, measured as the crow flies. Sidell Veterans War Memorial (approx. 2.2 miles away); Croghan Treaty with Pontiac

Regarding Detroit - Kaskaskia Indian Trail. A booklet from the 1942 dedication of the marker is held at the Urbana (IL) library archives. The Pontiac's Conspiracy marker (Croghan's treaty with Pontiac in 1765) is a few miles SW in Edgar County. That marker notes that the intersection of the Detroit - Kaskaskia trail with the Fort Clark (Peoria IL)- Fort Harrison (Terre Haute IN on the Wabash River) trail was in this vicinity.
Credits. This page was last revised on June 16, 2016. It was originally submitted on May 25, 2014. This page has been viewed 626 times since then and 30 times this year. Photo   1. submitted on May 25, 2014. • Bill Pfingsten was the editor who published this page.