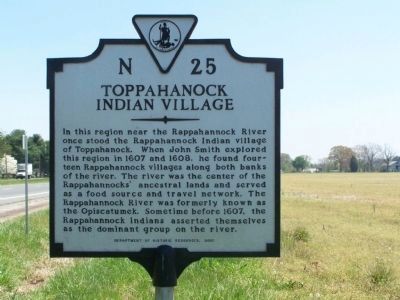 Topics and series. This historical marker is listed in these topic lists: Colonial Era • Exploration • Native Americans • Settlements & Settlers • Waterways & Vessels. In addition, it is included in the Virginia Department of Historic Resources series list. A significant historical year for this entry is 1607. 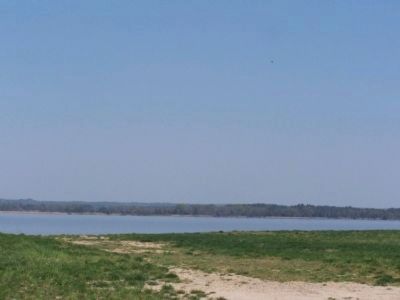 Click or scan to see
this page online
Road, on the right when traveling north. Touch for map. Marker is in this post office area: Tappahannock VA 22560, United States of America. Touch for directions.

Also see . . .  On the Road in Essex County - N-25-Toppahanock Indian Village. 2019 article by Zorine Shirley in the River Country News.Excerpt:

English Captain John Smith did arrive here, although as a prisoner at the time,because he was thought to have killed the Tribal Chief, some years earlier. He was found innocent and, as a cartographer, proceeded to chart the fourteen existing towns on the banks of the Rappahannock River.