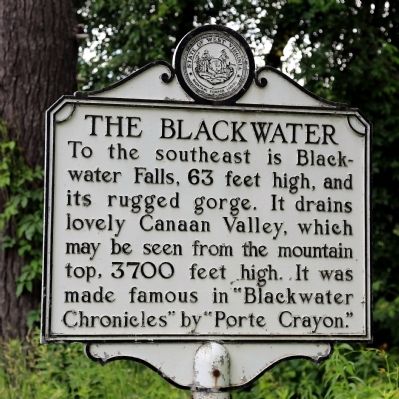 Photographed By J. J. Prats, June 22, 2014
1. The Blackwater Marker
Inscription.
The Blackwater. . To the southwest is Blackwater Falls, 63 feet high, and its rugged gorge. It drains lovely Canaan Valley, which may be seen from the mountain top, 3700 feet high. It was made famous in “Blackwater Chronicles” by “Porte Crayon.” . This historical marker is in Thomas in Tucker County West Virginia

To the southwest is Blackwater Falls, 63 feet high, and its rugged gorge. It drains lovely Canaan Valley, which may be seen from the mountain top, 3700 feet high. It was made famous in “Blackwater Chronicles” by “Porte Crayon.”

Topics and series. This historical marker is listed in these topic lists: Arts, Letters, Music • Natural Features • Waterways & Vessels. In addition, it is included in the West Virginia Archives and History series list. 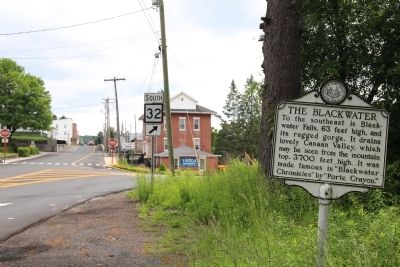 Also see . . .
1. Wikipedia entry for Blackwater River. “It is a true blackwater stream, owing to spruce and hemlock trees in its watershed, the tannins of which impart a tea or amber color to its water. ... After passing the town of Davis, it falls 62 feet (19 m) over Blackwater Falls and enters the eight-mile (13 km) long Blackwater Canyon in Blackwater Falls State Park. Here it forms whitewater rapids of Class IV-V+” (Submitted on June 25, 2014.)

2. Blackwater Chronicle. 2002 edition of the 1853 book by Philip Pendleton Kennedy and David Hunter Strother on Amazon.com. “West Virginia University English Professor Timothy Sweet edited the second volume in our West Virginia and Appalachia series. The Blackwater Chronicle by Philip Pendleton Kennedy was originally published in 1853, but this wilderness travelogue about the exploration of Canaan Valley has appeal far beyond that time and region. In fact, it was originally published 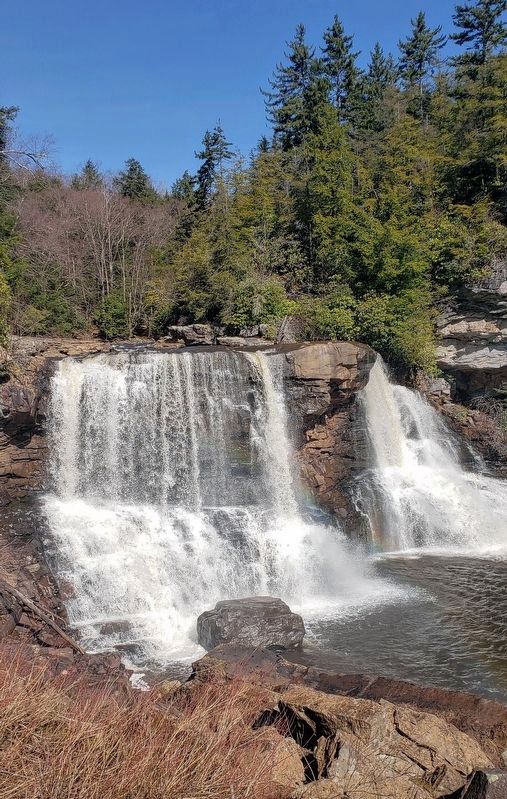 Photographed By Bradley Owen, March 27, 2021
3. Blackwater Falls
in New York and London, and even in a German edition. This often humorous and always fascinating story, told by Kennedy about the journey he and his colleagues took into yet unexplored territory, will make the reader long for days when there was still wilderness on this continent. It will also be of interest to the outdoorsman and should be viewed as an environmental cautionary tale.” Original edition also available as a free eBook on Google Play Books. (Submitted on June 25, 2014.)
Credits. This page was last revised on March 29, 2021. It was originally submitted on June 25, 2014, by J. J. Prats of Powell, Ohio. This page has been viewed 390 times since then and 23 times this year. Photos:   1, 2. submitted on June 25, 2014, by J. J. Prats of Powell, Ohio.   3. submitted on March 27, 2021, by Bradley Owen of Morgantown, West Virginia.

Editor’s want-list for this marker. Photos of the gorge and the Canaan Valley • Can you help?
Share this page.