Anniversary of Shelling by Union Gunboats 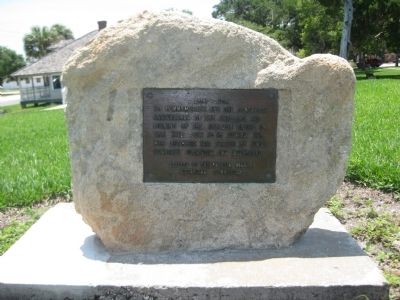 Photographed By Glenn Sheffield, June 3, 2012
1. Anniversary of Shelling by Union Gunboats Marker
Inscription.
Anniversary of Shelling by Union Gunboats. To commemorate the one hundredth anniversary of the shelling and burning of the Sheldon House on this site July 26th during the War Between the States by Union gunboats Oleander and Bouregard . This historical marker was erected by the Volusia County Historical Commission. It is in New Smyrna Beach in Volusia County Florida

Topics. This historical marker is listed in these topic lists: War, US Civil • Waterways & Vessels.

Location. 29° 1.621′ N, 80° 55.313′ W. Marker is in New Smyrna Beach, Florida, in Volusia County. Marker can be reached from North Riverside Drive north of Julia Street, on the left when traveling north. The marker is located at Old Fort Park across from the city marina. Touch for map. Marker is at or near this postal address: 200 North Riverside Drive, New Smyrna Beach FL 32168, United States of America. Touch for directions. 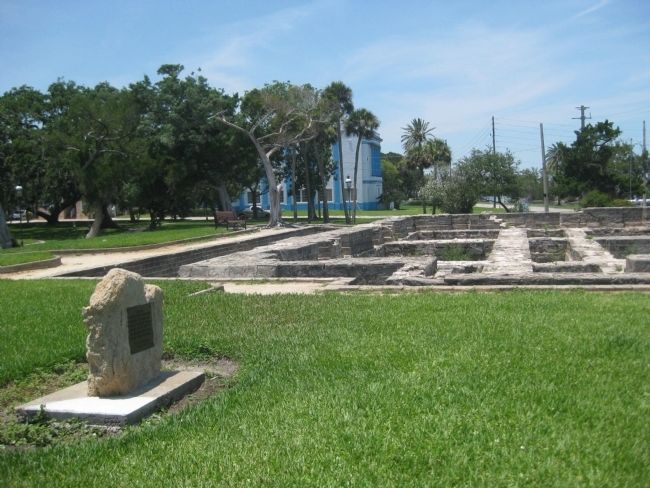 Photographed By Glenn Sheffield, June 3, 2012
2. Anniversary of Shelling by Union Gunboats Marker
Beyond the marker is the foundation atop which the Sheldon House was built.

More about this marker. The marker is mounted on a block of coquina, facing toward North Riverside Drive. It sits atop an earthen elevation containing the remains of an ancient Native American shell mound. Built into the mound is a fortress-like foundation of quarried coquina, the exact origin of which is unknown. These features have been listed with the National Register of Historic Places under the name Old Fort Park Archeological Site. Additionally, the site and marker both lie inside the boundaries of the New Smyrna Beach Historic District, also recognized by the NRHP.

Regarding Anniversary of Shelling by Union Gunboats. The Sheldon House was a residence and hotel that was built atop the large coquina foundation still found at the site today.

Also see . . .  Assault on New Smyrna, Florida, July 1863. This post at the "Civil War Navy Sesquicentennial Blog" offers details about the attack, which along with shelling from the Oleander and the Beauregard, involved other Union vessels and resulted in the capture or loss of Confederate ships and cargo. (Submitted on July 7, 2014, by Glenn Sheffield of Tampa, Florida.) 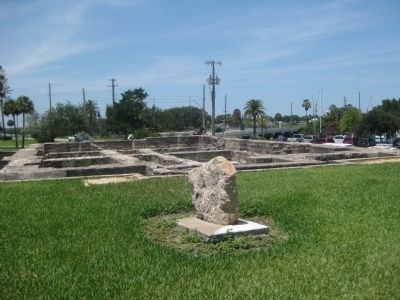