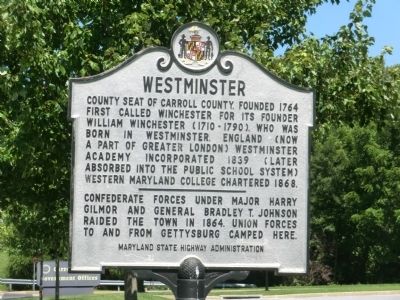 Confederate forces under Major Harry Gilmor and General Bradley T. Johnson raided the town in 1864. Union forces to and from Gettysburg camped here.

Topics. This historical marker is listed in these topic lists: Government & Politics • Settlements & Settlers • War, US Civil. A significant historical year for this entry is 1764.

Location. 39° 34.406′ N, 76° 59.228′ W. Marker is in Westminster, Maryland, in Carroll County. Marker is on North Center Street south of North Court Street, on the left when traveling south. The marker is located on the grounds of the Carroll County Government Offices buildings. Touch for map. Marker is at or near this postal address: 224 N Center St, Westminster MD 21157, United States of America. Touch for directions. 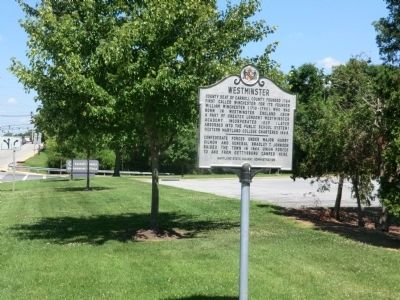