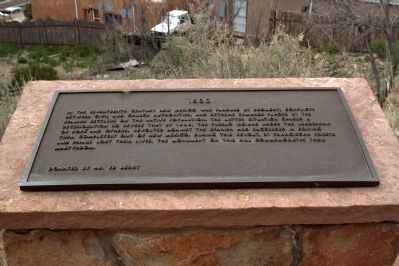 Photographed By J. J. Prats, April 18, 2014
1. 1680 Marker
Inscription.
1680. . In the seventeenth century New Mexico was plagued by drought, conflicts between civil and church authorities, and extreme demands placed by the Spanish settlers on the native population. The latter situation caused a deterioration so severe that by 1680, the Pueblo Indians under the leadership of Popé and others, revolted against the Spanish and succeeded in driving them completely out of New Mexico. During this revolt, 21 Franciscan priests and friars lost their lives. The monument on this hill commemorates their martyrdom. . This historical marker was erected in 1986 by Mr. Ed. Berry. It is in Santa Fe in Santa Fe County New Mexico

In the seventeenth century New Mexico was plagued by drought, conflicts between civil and church authorities, and extreme demands placed by the Spanish settlers on the native population. The latter situation caused a deterioration so severe that by 1680, the Pueblo Indians under the leadership of Popé and others, revolted against the Spanish and succeeded in driving them completely out of New Mexico. During this revolt, 21 Franciscan priests and friars lost their lives. The monument on this hill commemorates their martyrdom.

Topics. This historical marker is listed in these topic lists: Churches & Religion • Colonial Era • Native Americans. A significant historical year for this entry is 1680. 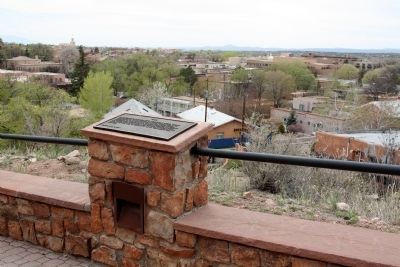 Click or scan to see
this page online
can be reached from Paseo de Peralta near Otero Street. It is at Hillside Park. Touch for map. Marker is in this post office area: Santa Fe NM 87501, United States of America. Touch for directions.

Also see . . .
1. Wikipedia Entry for the Pueblo Revolt of 1680. “Popé promised that, once the Spanish were killed or expelled, the ancient Pueblo gods would reward them with health and prosperity. Popé’s plan was that the inhabitants of each Pueblo would rise up and kill the Spanish in their area and then all would advance on Santa Fe to kill or expel all 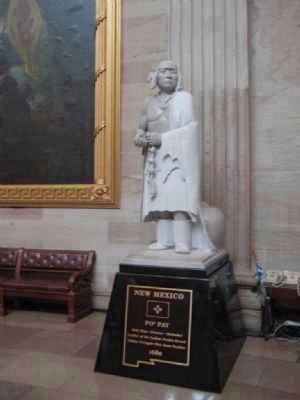 By dougward via Wikipedia Commons, August 3, 2007
3. Popé or Po’Pay, Leader of the Pueblo Revolt,
Holding a Knotted Cord
2005 marble sculpture by Cliff Fraqua is 7 feet high on a 3 foot base. This statue is located at the United States Capitol in Washington DC, in the Capitol Visitors’ Center.
the remaining Spanish. The date set for the uprising was August 11, 1680. Popé dispatched runners to all the Pueblos carrying knotted cords. Each morning the Pueblo leadership was to untie one knot from the cord, and when the last knot was untied, that would be the signal for them to rise against the Spaniards in unison. On August 9, however, the Spaniards were warned of the impending revolt by southern Tiwa leaders and they captured two Tesuque Pueblo youths entrusted with carrying the message to the pueblos. They were tortured to make them reveal the significance of the knotted cord.” (Submitted on August 13, 2014.)

2. Wikipedia Entry for Popé. “As stated by Matthew Martinez of Po’pay’s home Pueblo, Ohkay Owingeh, ‘it took a unique individual to orchestrate the revolt across two dozen communities who spoke six different languages and were sprawled over a distance of nearly 400 miles.’ What little we know of Po’pay the man is distorted through the lenses of the Spanish chroniclers and their Indian informants, most of whom were opposed to Po’Pay.

“Both the Spanish and the Pueblos were decimated by the revolt and its aftermath. However, what can 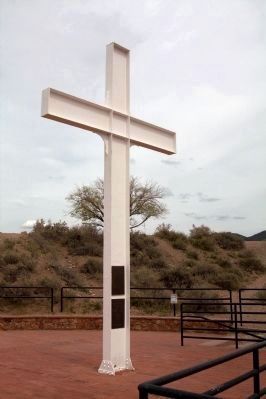 Photographed By J. J. Prats, April 18, 2014
4. Cross of the Martyrs Monument
This cross is at the terrace at the top of the walkway. Take a look at the satellite view on the introductory marker page for this series “375th Anniversary of Santa Fe” for a satellite view of this walkway with the location of this cross.
be said with certainty is that the relations between Spanish and the Pueblos was far different after the revolt than before. The dreaded encomienda system (forced labor) was prohibited in New Mexico. Franciscan priests did not interfere with Pueblo religious ceremonies provided that the Pueblos observed the outward forms of Catholicism. Pueblo warrior and Spanish soldier became allies in the fight against their common enemies, the Apaches, Navajo, Utes, and a new and even greater threat to the survival of New Mexico, the Comanche. Thus, New Mexico became a blend of Spanish and Pueblo culture.” (Submitted on August 13, 2014.)

3. About Santa Fe » Santuarios & Religious Sites » Cross of the Martyrs. “Walking up this paved trail you may notice circular fireplaces with remnants of charred coals. The fireplaces are lit with farolitos or bonfires when, during the first week in September, the city sponsors the oldest community gathering of its kind in the country, the ìFiesta de Santa Fe.î This Fiesta was inaugurated in 1692 to celebrate the peaceful return of the Spanish. On the final night of Fiesta 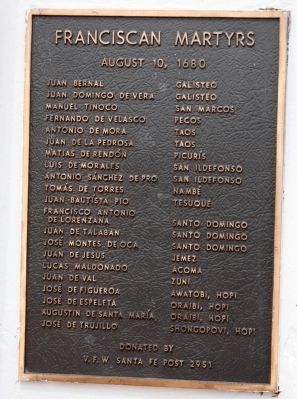 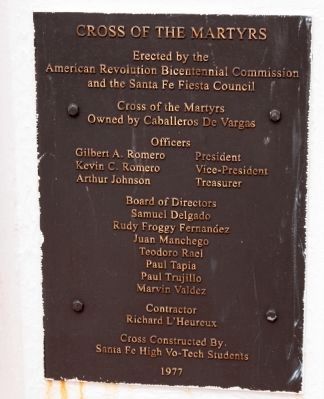