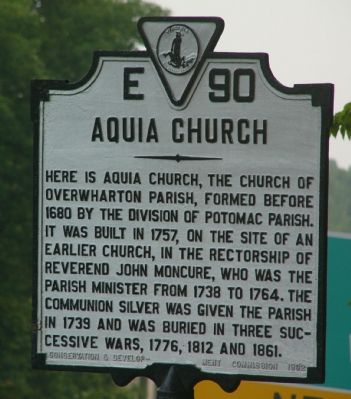 By Kevin White, August 24, 2007
1. Aquia Church Marker
Inscription.
Aquia Church. . Here is Aquia Church, the church of Overwharton Parish, formed before 1680 by the division of Potomac Parish. It was built in 1757, on the site of an earlier church, in the rectorship of Reverend John Moncure, who was the parish minister from 1738 to 1764. The Communion Silver was given the parish in 1739 and was buried in three successive wars, 1776, 1812, and 1861. . This historical marker was erected in 1932 by Conservation & Development Commission. It is in Stafford in Stafford County Virginia

Here is Aquia Church, the church of Overwharton Parish, formed before 1680 by the division of Potomac Parish. It was built in 1757, on the site of an earlier church, in the rectorship of Reverend John Moncure, who was the parish minister from 1738 to 1764. The Communion Silver was given the parish in 1739 and was buried in three successive wars, 1776, 1812, and 1861.

Topics and series. This historical marker is listed in these topic lists: Churches & Religion • Colonial Era • Patriots & Patriotism • War of 1812 • War, US Civil • War, US Revolutionary. In addition, it is included in the National Historic Landmarks series list. 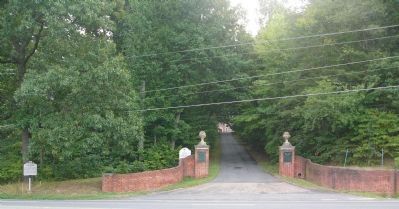 By Kevin White, August 24, 2007
2. Brickwork at Aquia Church exit. Marker is to the left.
Closeup pictures of the markers seen on the brickwork are below.
Highway. Touch for map. Marker is at or near this postal address: 2938 Jefferson Davis Hwy, Stafford, VA 22554, Stafford VA 22554, United States of America. Touch for directions.

Regarding Aquia Church. Aquia Church is located off I-95’s Exit 143 at 2938 Jefferson Davis Highway in Stafford, Virginia. It is considered one of the most significant colonial churches in America.

The first church erected on this property was built in 1667. The exterior of the current church was commissioned in 1751. Its interior burnt in 1755 immediately prior to its completion, and was rebuilt by 1757. Much of the interior of today’s church is original, including its most unique features, a rare “three-tiered pulpit” with an intricate sounding board, its architectural altarpiece and its elaborate gallery. They are all original, well preserved, 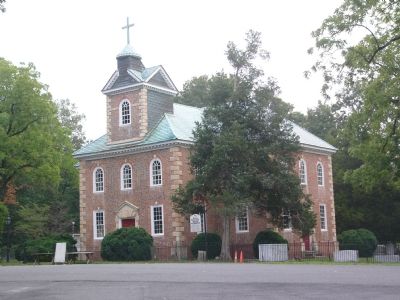 By Kevin White, August 24, 2007
3. Aquia Church
and still in use to this day. The church is still serving the Overwharton Parish. Behind the church is Aquia Cemetery, still in use today, and with tombstones dating back centuries.

This magnificent church is in the form of a Greek cross with a hipped roof and a tower on the west face. It's interior is brightened by two tiers of windows. There are 37 windows, rectangular on the first story, arched on the second, with a matching arched window in the tower. The walls are 24 inches thick, with two courses of bricks. The exterior corner quoins (carved stones where the walls meet), window keystones, and elaborate doorways are accented with sandstone from the nearby Aquia Creek sandstone quarries.

The interior of the church contains some of the finest Colonial woodworking to have survived to the 21st century. The plasterwork is original, as are the wainscoting, vestry tablet, and west gallery. The tall, three-level pulpit is one of the few surviving examples in America. The spaciousness and brilliance of its pure white two-story interior is impressive.

Nearby Aquia Landing was a strategic depot for Federal troops during the Civil War. During the War, the church was used by both the Confederate and Union Armies as the tide of war would change. Union regiments camping at Aquia Church used the building as a stable and hospital, as well as a church. The horses 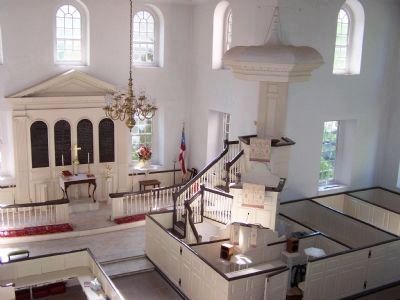 By Edwin Ridout, May 17, 2008
4. The celebrated three-tier pulpit of Aquia Episcopal Church.
stabled there nibbled on the pews, necessitating they be trimmed down to a lower height following the War. The names of some of the occupiers and their regiments are carved in the sandstone trim of the building and written on the interior walls of the tower.

Aquia Church still has its original silver communion service, which is used on special occasions. The silver survived the American Revolution, the War of 1812, and the Civil War. During each of these wars, parishioners buried the silver as hostile forces neared, and retrieved it after all danger had passed.

Located on the Church grounds is Fleurries, the former home of a prominent Stafford County resident, Anne E. Moncure. In 1987, a preserved and restored section of the home was moved to the grounds of Aquia Church to preserve it from encroaching development. The small, four-room cottage-style home is used by the church as its rectory. Please see "Other nearby markers" for a marker about Fleurries. 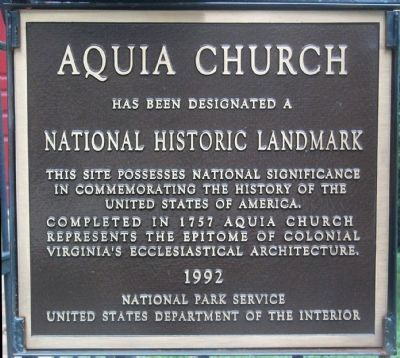 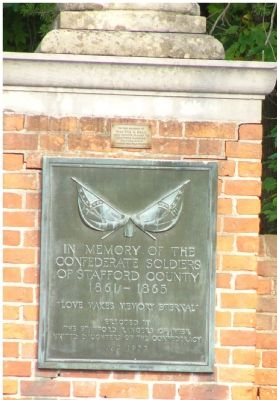 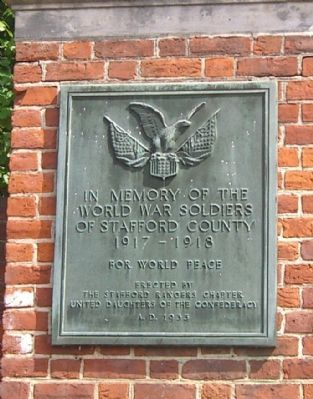 By Kevin White, September 9, 2007
8. Plaque on Brickwork at Church Exit - Northside
In Memory of the World War Soldiers of Stafford County 1917–1918

Erected by the Stafford Rangers Chapter, United Daughters of the Confederacy, A.D. 1933