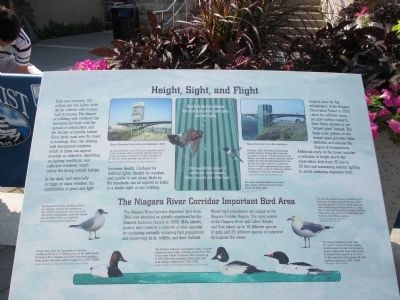 Height, Sight, and Flight.
Each year between 100 million and one billion birds die by collision with human-built structures. The danger of colliding with windows has increased for birds with the spread of urbanization and the decline of habitat. Since birds must now fly closer to buildings, they risk striking both transparent windows, which at times can appear invisible or reflective, depending on lighting conditions, and reflective windows, which mirror the facing outside habitat.

In the dark, and especially in foggy or rainy weather, the combination of glass and light becomes deadly. Confused by artificial lights, blinded by weather, and unable to see glass, birds by the hundreds can be injured or killed in a single night at one building.

Niagara Observation Tower prior to its rehabilitation in 2003.

The American Robin is one of the most commonly reported victims of window strikes. A familiar sight throughout the spring and summer, the American Robin is identified by its red-rusty breast and white rings around its eyes. Photo by Greg Gillson, The Bird Guide, Inc. http://thebirdguide.com 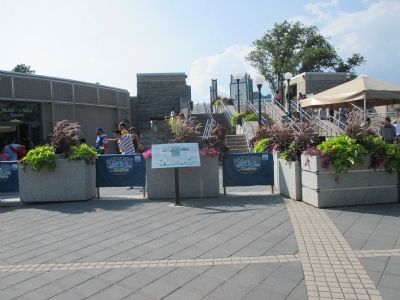 Click or scan to see
this page online
birds travel at relatively high speeds, their injuries are often fatal.

Niagara Observation Tower after rehabilitation.
Most birds collide with windows during spring and fall migrations. Because their movements are largely restricted to breeding territories in the summer, few birds hit windows during the summer months. The Ruby-throated Hummingbird is one bird that does strike windows in summertime. Since it is a highly aggressive bird that protects its food sources, it may be attacking its reflection, mistaking it for that of an intruding bird. Courtesy United States Fish and Wildlife Service.

Original plans for the rehabilitation of the Niagara Observation Tower in 2003 called for reflective glass, but after further research, State Parks decided to use "striped glass" instead. The large-scale pattern on the striped glass provides better definition and reduces the degree of transparency. Additional work on the tower included a reduction in height above the observation deck from 90 feet to 35 feet and minimizing exterior lighting to avoid confusing migratory birds. 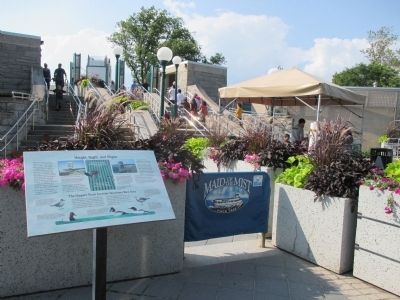 By Anton Schwarzmueller, July 31, 2014
3. Height, Sight, and Flight / The Niagara River Corridor Important Bird Area Marker
by the National Audubon Society in 1996, IBAs identify, protect, and conserve a network of sites essential for sustaining naturally occurring bird populations ans conserving birds, wildlife and their habitats. Winter bird populations are unique in the Niagara Frontier Region. The open waters of the Niagara River and Lakes Ontario and Erie attract up to 19 different species of waterfowl throughout the winter.

The Bonaparte's Gull uses the Niagara River as a migratory stopover and wintering site. Up to 50,000 of these birds, which account for 10% of the world population, have been counted along the Niagara River in a single day. Courtesy United States Fish and Wildlife Service.

A large diving duck, the Canvasback is a fast flyer, reaching speeds up to 72 miles per hour. In the winter months, the Niagara River supports up to 32% of the state population of this species with peak numbers ranging from 2,000-15,000. Courtesy Cornell Lab of Ornithology. Photographer: Lawrence Wales.

The Common Goldeneye is sometimes called a "whistler" because its wings make a whistling sound when it flies. In the winter months, the Niagara River supports up to 29% of the state population of this species with peak numbers ranging from 2,300-3,000. Courtesy Cornell Lab of Ornithology. Photographer: D. Robert Franz.

The adult Ring-billed Gull can be identified by the black ring encircling its bill and the green-yellow color of its legs. Up to 20,000 of these gulls have been counted along the Niagara River in a single day. A colony with thousands of nesting Ring-billed Gulls can be seen at the base of Goat Island near the Cave of the Winds attraction. Courtesy Cornell Lab of Ornithology. Photographer: O.S. Pettingill.

The Common Merganser is also called the "sawbill" because of the fine, toothlike serrations along the sides of its bill used for grasping slippery fish. In the winter months, the Niagara River supports up to 31% of the state population of this species with peak numbers ranging from 2,500-12,000. Photographer: Peter Llewellyn.

Topics. This historical marker is listed in these topic lists: Animals • Environment • Waterways & Vessels. A significant historical year for this entry is 2003.