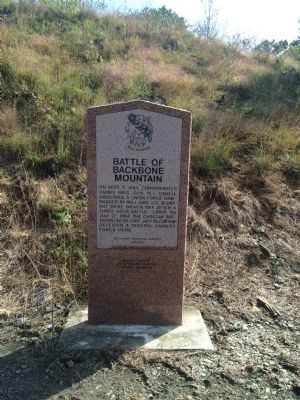 Photographed By Michael Manning, October 6, 2014
1. Battle of Backbone Mountain Marker
Inscription.
Battle of Backbone Mountain. . , On Sept. 1, 1863 Confederates under Brig. Gen. W.L. Cabell ambushed a Union force commanded by Maj. Gen. J.G. Blunt, but were driven off after a three hour battle. Later on July 24, 1864, the Choctaw Battalion led by Capt. Jack McCurtain defeated a Federal cavalry force here. . This historical marker was erected in 1995 by Oklahoma Historical Society. It is Near Pocola in Le Flore County Oklahoma

Topics and series. This historical marker is listed in these topic lists: Native Americans • War, US Civil. In addition, it is included in the Oklahoma Historical Society series list. A significant historical month for this entry is July 1861.